If you are more than one developer on the same BizTalk Server 2009 you might have noticed that there can be some deployment issues where you looses configuration that you or some other in your team already have done. Over time I have experienced the following issues from time to time:

The last one got me searching for why BizTalk does as it does.
I can’t give you a reason why this happens, but I can give you a location that contains the binding files that BizTalk uses behind your back. The location is:
C:\Users\<Username>\AppData\Roaming\Microsoft\BizTalk Server\Deployment\BindingFiles
“Roaming” could also be something else based on how you logon to your server. I haven’t gotten the issue on BizTalk Server 2010 yet, but that might be related to that I haven’t work with another user on the same server with the same BizTalk artifacts or related artifacts. But I can see that it creates the same binding files as in BizTalk Server 2009, so my guess is that the same issue is also here in BizTalk Server 2010.
A common deployment procedure like using the Powershell privider for BizTalk would fix this issue, but I haven’t gotten around to confirm this part.

BizTalk uses a combination of namespace#rootnode to define the schema type of a message, thereby making a MessageType unique (for example: http://mynamespace.com#MyRootNode). In other words, BizTalk uses this combination to identify and resolve schemas references. Then changing the filename of a schema does not make a new BizTalk schema!! You could modify the schema namespace […]

How I Avoid Writer’s Block

I was reading Buck Woody’s great How I Prepare for Presentations blog post and it reminded me of a question that I often get from people. Whenever I release a book, article, Pluralsight training class or do a presentation, I’m asked “how do you write so much?” Maybe the underlying question is really “Why do […]

What is a BizTalk Certification Worth?

Wondering what your BizTalk skills are worth? Read the latest MCP magazine salary survey. The report indicates that BizTalk certified professionals command an average base salary in excess of $114,000, the highest of any of the Microsoft certifications!

I’ve just published three webcasts looking at AppFabric Messaging, Introduction to Azure AppFabric Queues, AppFabric Duplicate Message Detection and AppFabric Messaging Message Expiration.
There are more webcasts on the AppFabric June CTP here.
This article will take a look at the code used in the duplicate detection webcast and explain the concepts involved.
Bear in mindthat this code is based on the AppFabric June CTP, things may change when the production version is released.
AppFabric Duplicate Message Detection
When developing message processing systems there can be scenarios where an identical message can be sent by an application more than once. In computer science if an operation is able to handle multiple instances of the same input without changing the result we say that it is idempotent. In AppFabric service bus messaging we are able to create idempotent messaging channels by leveraging the duplicate deletion functionality that is built into queues and topics.
Duplicate Message Detection
Duplicate message detection in queues and topics is based on the MessageId property of the messages that are sent by the sending application. When a message is created using one of the static CreateMessage methods the string value of a new GUID will be assigned to the MessageId property.
The following code will create 10 new messages and output their MessageID values.
The output from the code is shown below.

Detecting duplicate messages based on the default message ID can be useful in scenarios where an application sending messages to a queue or topic needs to ensure that exactly one message is delivered.
Consider the following code.
If the message is sent to the queue and a timeout exception is thrown there is no way for the sending application to know that the message has been sent successfully. If the sending application chooses to resend the message it can ensure at-least-once delivery. If the sending application chooses not to resend the message it can ensure at-most-once delivery.
If the queue or topic that the message is being sent to is configured to detect duplicate messages the client can retry sending the message and the queue or topic will ignore any duplicates. This will ensure exactly-once delivery of the message.
In some scenarios message duplication may occur before the application places the message on the queue or topic. If a web service is called by a client places a message on the queue there is a chance that the client may make two calls to the service if a timeout exception occurs. As the two messages created in the service will have different message IDs the duplicate detection logic will not detect the second message as a duplicate. In order for duplicate detection to work in these scenarios we must replace the default message ID with an identifier that is linked to the content of the messages we are sending. The next scenario will explore how this can be implemented.
Duplicate Messaging Scenario
Consider a scenario where Radio Frequency Identification (RFID) tags are used for tracking goods passing an RFID reader on a store checkout. It is very easy for some of the RFID tags to be read more than once as a basket of goods is moved past the RFID reader. If the application processing the tag reads is not able to detect and remove these duplicate tag read messages it will result in the customer being billed too much for the transaction, and also cause chaos in the inventory and other systems that are dependent on this data.
A simple console application has been created to simulate this scenario. The RFID tag reads are represented using a data contract. When an instance of the RfidTag class is created it is assigned a unique tag id, and the price and product can be set.
In the Main method of the console application an order batch is created as an array of RfidTag objects using the following code. The order is for equipment for two children to play a ball game. The number of items in the order and the total value for the order are calculated and displayed.
The reading of the order tags is then simulated using a random number generator to create duplicate tag reads. The while loop will send messages containing the RfidTag objects to the queue. The random number generator is used to decide whether or not to advance the position in the array, and generate duplicate tag reads 40% of the time. During the sending process a count of messages is maintained and displayed in the console when the message have been sent.
Once the tag read messages have been sent they can be received by the point of sale application and the customer billed. The code shown below will receive messages from the queue and display the product names. It will also count the number of items in the invoice and the invoice total, and display this information in the console.
When the application is run the output is as follows.

The queue now successfully suppresses duplicate messages and the amount billed to the customer is correct.

Learned A Little on .Net Namespaces

I’m back in the action again working on a large BizTalk Healthcare project after some time off.

This is the first time I’ve worked with HIPAA transactions like 270, 271, and others and so far I have learned a lot.

Like other projects I have worked on in the past, one of the first things I do is create projects and namespaces for the new code we have to build. This is usually something you did not have to put much thought into.  But with transactions like 270 I went to make a namespace like BizTalk.270.  This is all great until you deploy your code.  Visual Studios will add an “_” into the namespace like BizTalk._270 and never tells you it did this.  This is because .net namespaces cannot start with a number.  This extends to anything following the “.” In the namespace as well.

Then, I figured I would try BizTalk.X12-270.  But nope, hyphens are not allowed in namespaces as well.

I ended up at BizTalk.X12_270 but in the meantime I had to update all the projects twice to end up there.  Next time, I will test things out on one project before I go and update 50 projects with a specific namespace format.

Here’s a trick that usually gets people new to BizTalk. The Business Rule Engine has the ability to call (public) static methods on any .Net class, without needing to assert an instance of the class first. However, when you execute your policy, nothing is returned into the policy, and your rules will not work as […]

One of the strong points of the BizTalk Server Integration suite is the inclusion of a very versatile, flexible and extendable Business rules engine.

This versatility, however, is the same thing that makes it widely underused in deployments using BizTalk Server. Even today, being on the market in various versions for more than 6 years, I see people often struggle with it.

The root problem: the same flexibility and versatility comes with a rather steep learning curve to master.

To help you get started, Microsoft has packed a hands-on learning guide into a Virtual Lab. You can get to it here.

Try it, you won’t be disappointed. 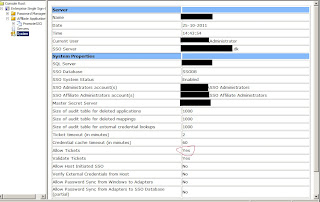 Use single-signon with FTP, SAP and other username/password

There are some of the adapters that doesn’t support single-sign on with you domain users that are assigned to you BizTalk Host Instans. This is an issue in BizTalk when you come to deployment and where you don’t want your password for a FTP site to be listed in your binding files.

When you configure your FTP Send Port in Biztalk there is an option to select the  SSO Affiliate, which lists your SSO  Affiliate applications from Enterprise Single Sign-On. This is a part of what is needed.

The first thing you need is to have a promoted property on your message called “SSOTicket” and this have to have a specifict value. I do this in a pipeline component, but I thing you also can do this in an Orchestration. The code is as follows:

Create a send pipeline that uses this pipeline component in the Encode phase.

Set the “Allow Tickets” to yes on the system:

Then you need to create an affiliate application in Enterprise Single Sign-On:

Give it a nice name and remember to check the check boxes: 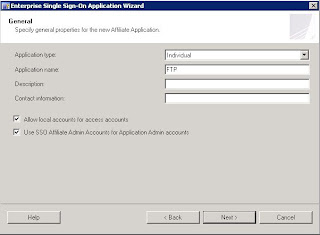 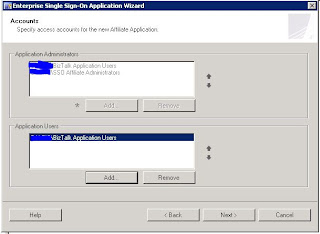 Check “Ticket Allowed” and then finish the Wizard. 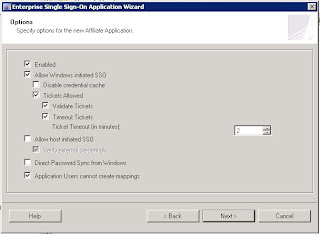 Click new mapping on the new application you just have created. Check the “Credentials as Windows credentials” 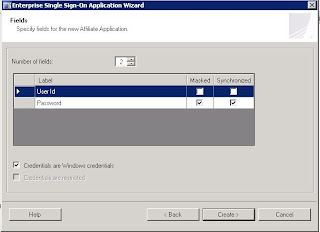 Now on your FTP Send port you select the new SSO affiliate application. 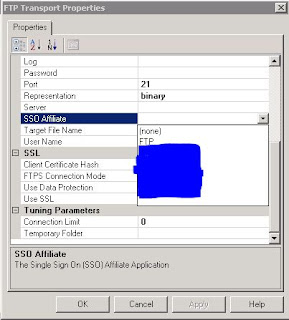 This should be it. You now have single sign-on on your FTP sites and you can use your Enterprise Single Sign-on to manage your mappings between domain accounts and external accounts.

A couple months back I did a test for a client about whether the legacy Dynamics CRM 4 adapter would work successfully on BizTalk 2010. I know this is not the recommended configuration and that the CRM 2011 SDK does not mention this as an acceptable or supportable configuration. Many companies have made a significant […]