At last, I can announce that ’BizTalk Server 2010 Unleashed’ has been published and is available through major booksellers in both printed and electronic form.The book is not a new edition of the old ’BizTalk Server 2004 Unleashed’ book from several years ago, although Brian Loesgen, our fearless team leader, provided continuity with that title.Instead, this is entirely new content written by a team of six authors, including myself.

BizTalk Server is such a huge subject.It proved a challenge to decide on the content when we started our collaboration a couple of years back (yes, it really was that long ago!). We quickly decided that the book would principally target the BizTalk development community and that it would provide a solid and comprehensive introduction to the chief artefacts of BizTalk Server 2010 solutions – schemas, maps, orchestrations, pipelines and adapters.Much of this content was written by Jan Eliasen and forms part 1 (“The Basics”) of the book.
On the day my complimentary copies were delivered, I was working on the implementation of a pipeline component, and had an issue to do with exposing developer-friendly info in Visual Studio.I used this as a test-run of Jan’s content, and sure enough, discovered that he had clearly addressed the issue I had, including sample code.Jan’s contribution is succinct and to the point, but is also very comprehensive (he’s even documented things like creating custom pipeline templates!). I particularly appreciate the way he included plenty of guidance on testing individual artefacts.
My contributions to part 1 is a chapter on adapters (the ’adapter chapter’ as we fondly called it). This explores each of the ’native’ adapters and the family of WCF adapters.There is also some content on the new SQL adapter which is part of the BizTalk Adapter Pack.In that respect, it overlaps with ’Microsoft BizTalk 2010 Line of Business Systems Integration’ which I reviewed recently, and also in respect of the SharePoint adapter.However, ’Microsoft BizTalk 2010 Line of Business Systems Integration’ provides a whole lot more information on a range of LoB adapters.It is written in a different style to BizTalk Server 2010 Unleashed and is highly complementary.
Although the original plan was to include content on custom adapter creation, this didn’t, in the end, get covered in any depth.One reason for this is that, going forward, most custom adapter development for both BizTalk and Azure Integration Services (still some way off) is likely to be done using the WCF LoB Adapter SDK.That suggested that we would have had to document two distinct adapter frameworks in order to do the job properly, and this proved a little too much to tackle.Room there for another book, methinks.
Part 1 accounts for about half the content of the book.Beyond this, we wanted to add value by covering more advanced topics, including the use of BizTalk Server alongside WCF and the emerging Azure platform, new features in BizTalk Server 2010 and topics that have been only partially covered elsewhere.So, for example, Anush Kumar was contributed an entire section (part 4) on RFID including the new RFID Mobile Framework.Anush is well-known in the BizTalk community due to his involvement in the development of RFID Server.Between Jon Flanders and Brian Loesgen, the book includes content on exploiting WCF extensibility in BizTalk, integrating via the Azure service bus (please note that this content was written before the advent of topics/subscriptions or Integration Services), the BAM framework and the ESB toolkit.
There is also a whole section (part 3) written by Scott Colestock that introduces the Administration Console and describes deployment approaches for BizTalk solutions.
Rules
That leaves one more subject for which I was responsible.One of the main reasons I was asked to contribute to the book was to document rules processing.Although there is some great content out there on the use of the BRE, I have long felt there is a need for a more comprehensive introduction.Due to some early confusion, I originally intended a total of seven short chapters on rules, but this content was refactored into two longer chapters.The first chapter introduces the Business Rules Framework.My idea was to emphasise the entire framework up front, rather than simply explore the rules composer and other tools.I also tried to explain the typical ’feel’ of rules processing in the context of a BizTalk application, and the relationship between executable rules and higher-level business rules.
The second chapter investigates rule-based programming.It attempts broadly to achieve two related goals.The first is to explain rules programming to developers, to demystify the model, explain the techniques and provide insight into how to handle a number of common issues and pitfalls that rules developers face.The second is to provide a solid theoretical introduction to rules processing, including concepts that are not generally familiar to the average developer.I resisted the temptation, though, to provide an in-depth explanation of how the Rete Algorithm works, which I’m sure will be a relief:-)You can read the Wikipedia article on that.
Conclusions
So there you have it.BizTalk Server 2010 is a mature enterprise-level product which, although it has a long future ahead of it, won’t change fundamentally over time.Microsoft has publically stated that their future major investments in EAI/EDI will be made in the Azure space, although new versions of BizTalk Server will continue to benefit from general improvement and greater integration with the evolving Azure platform.So, hopefully, our content will serve for some time as a useful introduction to BizTalk Server, chiefly from a developer’s perspective.

Manage your IT Systems from your Mobile Device: Tellago Studios Announces Moesion

This week Tellago Studios announced Moesion : a cloud platform to manage your IT systems or cloud services directly from your smartphone or tablet. Moesion is the result of our constant obsession to bring innovation and modern technologies to the world…(read more)

BizTalk Environment (design) documentation you can described the different BizTalk environment Development, UAT and Production. In this type of document you can roughly describe the following:

To add you in documenting the environment or take into consideration (i.e. reference material) is MSDN Microsoft BizTalk Server 2010 Operations Guide.

Functional Design you describe how solution will work, which service it will call, what type of message’s it excepts, processes and sends. You can use notation symbols found in EAI Patterns site and create a functional model for your BizTalk solution (see example below).

You can also use UML like state diagram to depict process that is implemented in BizTalk solution (see picture below). 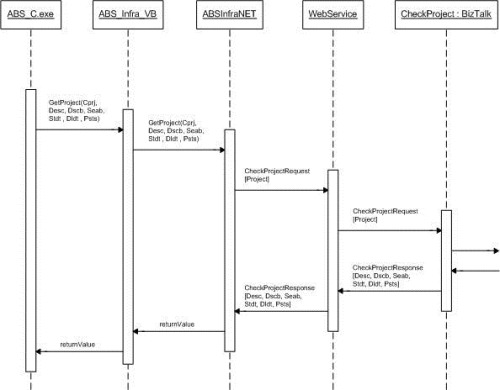 Besides diagrams, you will also document specifications for messages (data types, restrictions, e.a.), security settings, protocols, message patterns, and so on.

Finally Technical (design) documentation of BizTalk solution and its configuration is fairly simple as you use BizTalk documenter for it. This is tool found on codeplex that can automatically generate a document (compiled chm, and even HTML for 2010 version).You can start documenter and following screen will be shown. 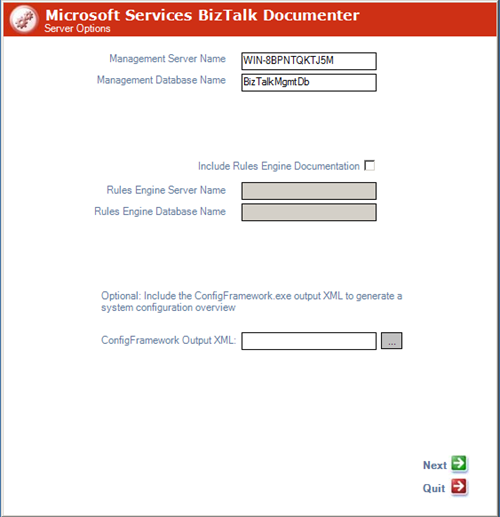 Click Next, Select if you want to completely document entire configuration of specific BizTalk application. Click Next, you can select (this is new with BizTalk 2010 documenter) SSO configuration e.a. 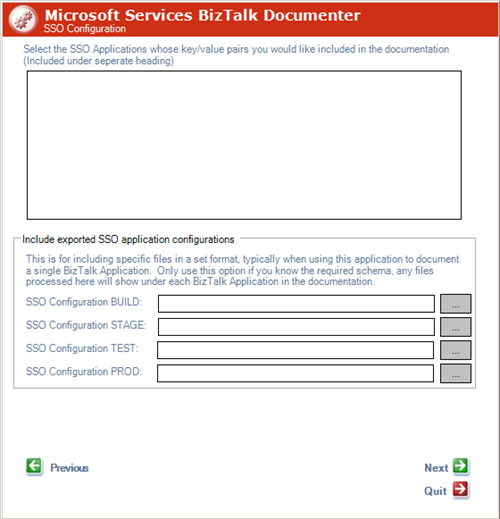 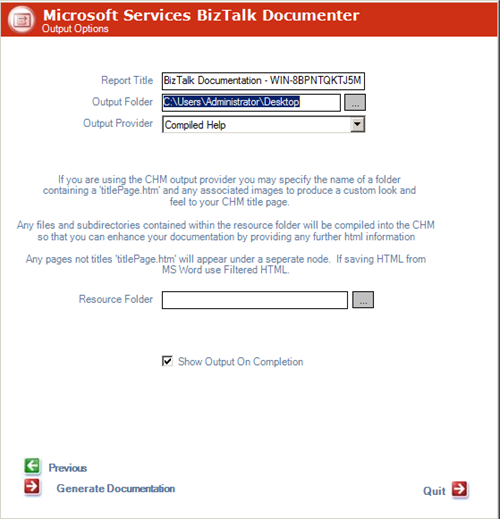 Finally you can click Generate Documentation and documentation will generated for you in desired format. 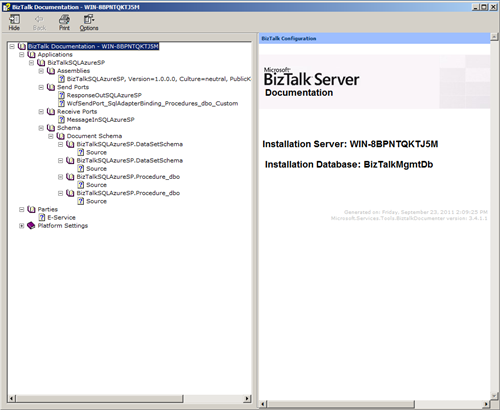 Comments are welcome as I am interested in your view on documenting BizTalk.

If you want to get up to speed on Azure AppFabric brokered messaging there are a couple of resources you should check out.
SB CTP Messaging User Guide
This is a 30 page word document put together by the AppFabric dev team. It’s a great read to get an introduction to Queues, Topics and Subscriptions. If you are working in the AppFabric Labs environment using the May or June CTP the code will work fine. There have been significant changes in the API in the September 2011 release, so don’t expect any of the code to compile in that release, but the theory section is still very much valid.
Best Practices for Leveraging Windows Azure Service Bus Brokered Messaging API
This is a 10 page blog post from the Windows Azure CAT team that provides some great tips for developers who have some familiarity with brokered messaging. The level is pretty advanced, and it’s impressive to see how much experience the CAT team has accumulated on brokered messaging. All the code here is on the September 2011 release. It’s a must-read if you plan to develop anything using service bus brokered messaging.

Nigel Bachmann just added a new version of BizTalk Documenter: BizTalk Server 2010 Documenter and update the existing version BizTalk 2006 Documenter. The source code and MSI for both versions are available on CodePlex. This tool creates documentation for a given BTS 2010 installation and it will compile: BTS Host configuration Send/Receive port configuration Orchestration […]

I’ve added a third walkthrough to the AppFabric Walkthrough series.
“The following walkthrough will show how topics and subscriptions can be used to implement a simple publish-subscribe messaging channel. The next walkthrough will build on this sample and explore the use of filters on subscriptions.”
Introducing Topics and Subscriptions
The other two walkthroughs are here.
Simple Brokered Messaging
Creating a Simple Queue Management Tool
At present there are no charges for using the new brokered messaging capabilities in AppFabric, so I have been taking advantage of this to explore the new functionality. This free offer will not last forever, so now is a great time to take a look at the new capabilities.

Here’s the official timetable, come along they’re free for you!!

(All times are in Australian Eastern Standard Time)