ExpectedException in MSTest does not check the exception message

When you’re writing a unit test to verify that an exception is thrown and you want to check the content of the error message, the ExpectionException attribute doesn’t do it.

This code (which you see a lot):

– checks that an exception is thrown, and the test will pass if the exception is of type ValidationException. The second parameter of the ExpectedException attribute is the string that will be written in the MSTest output if the test fails, so this test is not checking the content of the exception message.

Be a better IT Pro: Moesion Cartoon

Check this out! Please sign up for the private Beta at www.moesion.com…(read more)

– will throw a System.AggregateException in the TaskExceptionHolder.Finalize() method and it will take down the IIS worker process with it (as described in this StackOverflow question). Of course this also kills any other connections being handled by the worker process.

This is in-line with the expected behaviour for ASP.NET applications:

So the WCF error handler only applies within the request-response context, and within task code you need to explicitly add error handling:

– which can call into your error handler’s HandleError method (if your scenario warrants consistent error handling).

I’ve spent some time lately playing around with MSMQ, Authentication and the use of External Certificates. This is an interesting scenario, but one that I found to be documented in relatively unclear terms, with somewhat conflicting information all over the place. Plus, the whole process isn’t very transparent at first. Normally, when you’re using MSMQ […]
Blog Post by: Tomas Restrepo

Last week on 21st September we had the privilege to present the capabilities of BizTalk360 to an enthusiastic audience in Copenhagen, Denmark (You can view the pictures here on our facebook fan page).

We fully understand for any technical user group meetings you are not going to get decision makers who will put the money down and buy the product, it will normally be truly technical chaps, who are prepared to spend some of their spare time either to present or come and learn some new stuff. We don’t treat these presentations as marketing pitch, instead we use this opportunity to spread the word and more importantly get some real feedback from people who are on the field. It proved really valuable for us, and we can see the proof in the evolution of BizTalk360.

Jan Eliasen doesn’t require any introduction in the BizTalk world, he is a long time BizTalk Server MVP, he is great blogger all things BizTalk, along with few energetic chaps he runs the BizTalk user group in Denmark, he is the first one to write any BizTalk exams that comes out, and more importantly he is the author of the newly released book "Microsoft BizTalk Server 2010 Unleashed"

We are super excited to see such a positive feedback from a great influencer in the community.

Following on from the successful BizTalk Server 2010 Developer training that Mexia ran in Melbourne in August 2011, we are doing it again, this time we have added a 2 days BizTalk 2010 Administrator training course. 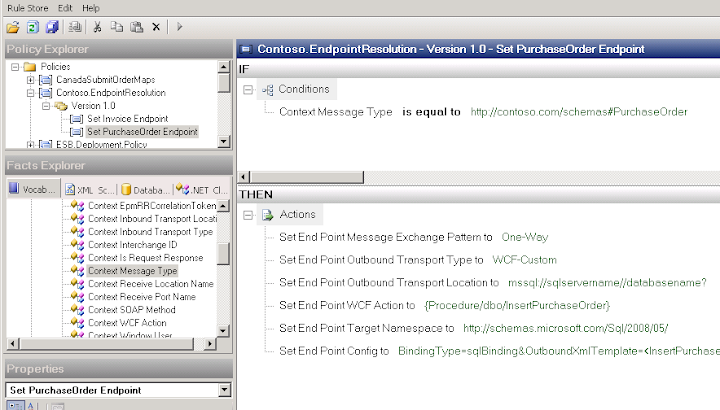 This example is not covered in the ESB Toolkit samples and I bumped my forehead a few times while making it work. I thought it’d be helpful to save other fellow BizTalk’ers from headaches by publishing findings.

I have been fun of dynamic generic messaging for quite a while and went long ways to avoid working with typed messages and static bindings when it made sense. Nowadays, with the ESB Toolkit one does not have to spend much effort to achieve this goal. But one has to learn intricacies of configuration to unleash unlimited flexibility of the Toolkit.

Let’s say we have a requirement to store some messages on service bus to the database. And the number of message types supported is growing plus their schemas can potentially change. If the database is SQL Server we can use an ESB Off-Ramp dynamically bound to WCF-SQL send port.

The send port interface can be implemented different ways. One way is to generate typed WCF-SQL Adapter schemas for database objects (tables or procedures). Then create maps to transform original message to the adapter schema. This may potentially lead to complex maps that perform poorly, difficult to maintain and support. We also have to deploy new schemas every time new type is added.

Other way with minimal BizTalk coding is to use one-way port calling stored procedure that accepts entire message as a parameter and internally maps/saves message to the database. This saves us from creating and deploying stored procedure schema and map, as well as schema for the response message. We also gain performance on the BizTalk end by offloading XML to relational model mapping to the database engine which it does more efficiently. Simply put, stored procedures perform better and simpler to maintain. I chose this approach over the first.

In the Action area there are a lot of things being set up. Let’s go through them one by one:

Add Messaging service to the Itinerary with the BRE endpoint resolver that uses policy created earlier. Then simply use one-way off-ramp. In the dynamic one-way port configuration PassThroughTransmit pipeline will do the job. 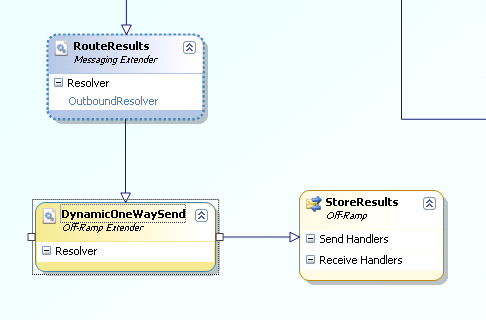 Once all these components implemented you have truly generic infrastructure to save any message to the database with minimal overhead. As new messages added, you simply create new stored procedure and rule that associate message type with it. And there are no BizTalk artifacts to deploy.

It’s been a week since we announced the private beta availability of Moesion and the reaction from customers, partners and the press have been incredible. I thought I’d take the time to highlight some of the press coverage that Moesion has received during…(read more)

A topic that I think BizTalk professional find appealing in Windows Azure is the Service Bus (part of Windows Azure AppFabric). Service Bus provides secure messaging and connectivity capabilities that enable building distributed and disconnected applications in the cloud, as well hybrid application across both on-premises and the cloud.

One of new features is topics and queues. Clemens Vasters did a talk on Windows Azure Service Bus Topics and Queues during Windows Build and an advanced one, which you find on his blog.

You can work with this new feature through Windows Azure AppFabric SDK V1.5 – September 2011. The version 1.5 SDK includes an updated Service Bus assembly that includes support for durable, or “brokered” messaging features, such as queues, topics, and subscriptions. These features require the .NET Framework version 4.0. (Note: If you have a dependency on the .NET Framework version 3.5, you should download or continue to use version 1.0 of the AppFabric SDK.)

If you have virtual machine available or laptop following requirements are applicable:

Unexpected use of keyword: ’task’

I am currently using BizTalk 2010 as the integration hub between a number of systems, including Microsoft Dynamics CRM Online. The XLANG/s Orchestration compiler will complain with the following: Unexpected use of keyword: ‘task’ One of the core entities in CRM is the ‘Task’, a sub-type of an Activity in the Sales process. However, we […]