by community-syndication | May 13, 2016 | BizTalk Community Blogs via Syndication

The third, and last, day of the event. Hard to top day 2 after we won the BizTalk360 Partner of the Year award, but the program looked promising.
First up: Stephen W. Thomas. His presentation was called “Azure IaaS Essentials for the BizTalk Developer”. The main point in this presentation was (as he stated): Azure IaaS is about putting the power of infrastructure in the hands of the developers!
Blog Post by: AxonOlympus

by community-syndication | May 13, 2016 | BizTalk Community Blogs via Syndication

Read more onMicrosoft’s vision and road map and their key announcements from Day 1 at INTEGRATE 2016. BizTalk Summit in London only got bigger and better this year as INTEGRATE 2016. Microsoft usually has very little representation for integration topics at //build/ and TechEd events. INTEGRATE 2016 is the place to be for technologists interested […]

by community-syndication | May 12, 2016 | BizTalk Community Blogs via Syndication

Because of the fully packed agenda, the second day of the event already started at 8am. The first session of the day was presented by Chris Anderson, who showed the attendees how to leverage Azure App Service and Azure Functions for integration scenarios. Azure App Service is a cloud platform that focuses on rapid development and enables you to build, deploy and manage web and mobile apps that connect to data anywhere: in the cloud or on-prem.
Blog Post by: AxonOlympus

by community-syndication | May 12, 2016 | BizTalk Community Blogs via Syndication

After all the hard work from the team for the past 2 months, it’s finally INTEGRATE 2016 time. It was a murkyday at ExCeL London with temperatures hovering around the 15 degree mark and light showers. However, the showers weren’t light enough atLondon City airport (the airport closest to the event venue), which meant that […]

The post INTEGRATE 2016 – A Recap of Day 1 & Announcements from the Product Group appeared first on BizTalk360 Blog.

by Daniel probert | May 11, 2016 | BizTalk Community Blogs via Syndication

At the BizTalk360 Integrate2016 conference today, Microsoft announced a whole slew of new features and functionality for both BizTalk 2016 and Logic Apps.

Some of these include:

1) BizTalk 2016 will have a Logic Apps Connector

2) Logic Apps will have a BizTalk Connector…

Yes, you read that right: it will be possible to execute/initiate a Logic App from BizTalk on-premises (or in a VM/IaaS); and from a Logic App, you will be able to send a message directly to BizTalk.

Now although both of these scenarios are possible today (by exposing a RESTful service on BTS, or using the REST/JSON functionality on BizTalk), these new announcements make this even easier.

The BizTalk Connector in Logic Apps connects directly to your BizTalk Server on-premises, although details of how this is achieved were not released.

Integration accounts are an EIP feature which will allow storage of schemas, maps, certificates, TPM etc. and allowing this data to be shared by a number of Logic Apps.

Additionally, Visual Studio will allow any items within your Integration Accounts (maps, schemas, etc.) to be added to a project and synced magically up to Azure.

And all of this can be stored in your source control repository (VSTS/Git).

And… this integrates with ALM/Build so you can deploy it all up to Azure: you can parameterise your ARM Templates so you can use a single template for Dev/Test/Prod etc.

Excited to see what Day 2 brings!

by community-syndication | May 11, 2016 | BizTalk Community Blogs via Syndication

Today was the first day of the Integrate 2016 event held in London (http://www.biztalk360.com/integrate-2016) and after attending most of today’s sessions (more on this later), here are some highlights.
Blog Post by: AxonOlympus 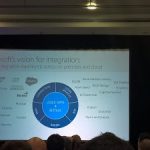 by noreply@blogger.com Steef-Jan Wiggers | May 11, 2016 | BizTalk Community Blogs via Syndication

Microsoft is bringing the technologies around integration together in their vision for integration. API Management, Logic Apps, Connectors, Service Bus, and BizTalk are shaped into a hybrid type of platform. BizTalk and the logic apps form the heart in their vision to provide a seamless hybrid experience. Jim Harrer, the new PM for integration, shared the vision, services, and roadmap with us today at Integrate 2016. This event is the only integration focused event worldwide in the London Excel.

Below the picture that tells it all. And around BizTalk will see a release of the CTP2 version soon, including a first version of a logic app adapter, which will broaden the connectivity spectrum of BizTalk.

The vision shows Microsoft commitment in the integration space. Many thought that the BizTalk product was on life support and that there was no integration story. Well there is one and the roadmap shows a lot of promise. And what Microsoft has planned for us can be seen in the next picture.

The Visual Studio Integration is one of the much anticipated features that many integration professionals cheered. And it shows a good step forward. The product team shows what investments the Product team is making, which will enhance our confidence in integration with Microsoft technologies.

Integrate 2016 started with a blast and demonstrates that this is event is much needed to reestablish Microsoft as frontrunner in the integration space and that their technology and services are very relevant.

Thanks BizTalk360, their team, MVP’s, the attendees and Microsoft for making this event happening.
Cheers,
Steef-Jan

by Nick Hauenstein | May 4, 2016 | BizTalk Community Blogs via Syndication

I’m happy to announce that I’ve been asked to speak at the BizTalk 360 Integrate 2016 conference May 11th-13th in London. When brainstorming for the session topics I had lots of ideas of fun things that could be accomplished with Logic Apps and API Apps, but decided to take things in a slightly different direction.

Over the last few years, I’ve seen BizTalk Server developers who are skilled as general .NET developers, but who may not have the time or energy to keep up-to-date with the evolution of Logic Apps, API Apps – and all of the things that come with them Web API, node.js, Swagger, etc. That is perfectly understandable because as a developer building enterprise integrations exchanging X12 or EDIFACT data using BizTalk Server, you might not have needed to interact with JSON serialization in the past.

This Will Make Your Dreams Come True

This last year, my team and I have been working hard to stay on top of changes to Microsoft’s cloud-based integration technologies. Time and again we’ve fallen, and seen others do it as well, into the trap of looking at a tool and then trying to figure out how it can solve all of our problems – even to the point of searching out problems (imagined or otherwise) that it could tackle. It happens anytime there’s a sufficiently impressive tool, or sufficiently impressive salesperson (or both). Go ahead, click the link, I’ll wait. But if you do click that link, you will end up trying to find how you too could buy a 10 pack of vegetable peelers. Then you would be trying to figure out how to incorporate zucchini strands into dessert.

Getting Back on Track

Whenever that happens we’ve been able to course correct by forgetting about the tool and focusing on the problem we want to solve, or even better, the ideal solution to the problem. When describing the solution using Enterprise Integration Patterns as our vocabulary, we can quickly model an answer that works without assigning a particular tool or technology. Maybe a given solution needs a content enricher, or a resequencer, or guaranteed delivery, or whatever – not necessarily a specific technology applied.

My session is designed to help BizTalk Developers learn how to answer those questions for themselves. Specifically, identifying the capabilities of the new additions to our toolset, and then showing how to use them without assumptions of in-depth knowledge of the underpinnings. In the talk, you will see API App that creates promoted properties from an XML document (just like BizTalk Server) so that we could then potentially reach out to other Azure capabilities and implement publish-subscribe in concert with content-based routing and correlation.

by community-syndication | May 4, 2016 | BizTalk Community Blogs via Syndication

I’m happy to announce that I’ve been asked to speak at the BizTalk 360 Integrate 2016 conference May 11th-13th in London. When brainstorming for the session topics I had lots of ideas of fun things that could be accomplished with … Continue reading →

by community-syndication | May 4, 2016 | BizTalk Community Blogs via Syndication

Bigger and better this is what to expect in this fourth conference that will take place in London. I think we can say with great certainty that this will be the biggest integration conference in the world that will happen this year! (of course related to Microsoft technologies, I don’t want to compare with other […]