What happened in Microsoft Integration space in 2017? 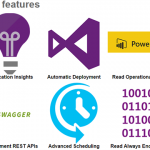 A new year has just began and at BizTalk360 we are excited to find out what 2018 will bring us as a company. We are delighted that we will release more versions of our flagship product BizTalk360, further evolve ServiceBus360 and bring new products like Atomic Scope and Document360.

In this article however, we want to look back at what 2017 brought from a Microsoft Integration space perspective. Although we did not see a new version of BizTalk Server, we did see new features arrive for BizTalk Server 2016, by means of the two feature packs which have been released. Of course, we have also seen new CU’s appear for the currently supported BizTalk Server versions, which are 2013, 2013R2 and 2016.

Note however, that in case you are on BizTalk Server 2013 or 2013 R2, mainstream support will end July 10th, this year! So you should consider upgrading to BizTalk Server 2016. As migrating to another BizTalk platform is not something to take lightly, Microsoft offers the BizTalk Migration tool. Read more about this tool later in this article.

An important move Microsoft made last year, was embracing the Open Source community. Of course, also in the Logic Apps and related technologies a lot has happened. Keep on reading, when you want to read about most important developments in Microsoft Integration space.

The concept of Feature Packs is new to BizTalk Server. The idea of bringing Feature Packs is to bring new features once they are ready, instead of having to wait until the next major release.

For BizTalk Server, these packs can be installed on top of (only) BizTalk Server 2016 and bring new functionality, without breaking existing functionality. As far as we know, there are no plans to bring Feature Packs for other BizTalk version than 2016.

Last year Microsoft brought 2 Feature Packs for BizTalk Server 2016. Let’s have a look at both.

This first Feature pack was released on April 26th. It could only be installed on top of the base version of BizTalk Server 2016 (3.12.774.0), so you could not install it after you have applied any CU’s for BizTalk Server 2016. This issue his been fixed on September 21st, when Microsoft released a version of FP1 which was compatible with Cumulative Update 3 (KB4039664), the most recent CU at that time. 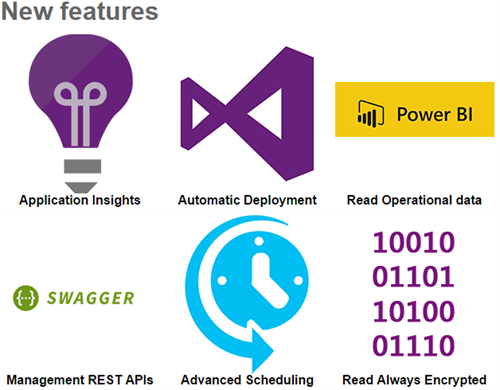 More information on Feature Pack 1 can be found here:  https://blogs.biztalk360.com/microsoft-biztalk-server-2016-feature-pack-1/

This pack was released on November 21st and can be installed immediately on top of the BizTalk Server 2016 Cumulative Updates 1, 2 and 3 and Feature Pack 1. 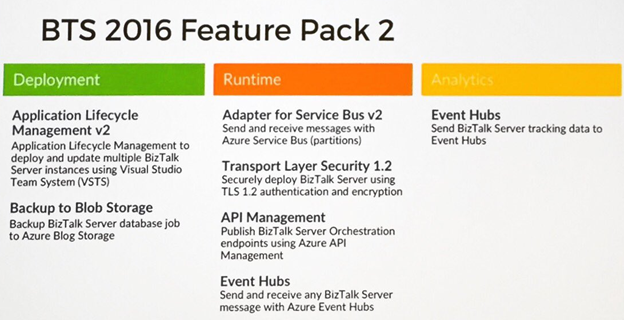 In this Feature Pack, the following features were brought:

More information on Feature Pack 2 can be found here:  https://blogs.biztalk360.com/microsoft-biztalk-server-2016-feature-pack-2-released/

In 2017, Microsoft also brought a number of Cumulative Updates for the different versions of BizTalk Server. See below for an overview which contains links to the download pages:

NOTE: this version is going out of mainstream support July 10th, 2018

NOTE: this version is going out of mainstream support July 10th, 2018

In September Microsoft announced that BizTalk Server has joined the Open Source community. This is motivated by the increased commitment that Microsoft wants to provide a better product to their customers.

So far, Microsoft has open sourced the following:

For Host Integration Server (HIS), Microsoft has provided a PowerShell script that helps creating .hidx files, which are used by the HIS runtime to communicate with the backend systems.

The repository which contains above mentioned stuff, can be found at GitHub:

Microsoft’s intention is to continue their open source commitment. Community contributions are more than welcome and can contain artifacts like Schemas, Samples, Adapters, pipeline components or anything else you feel the community can take advantage of.

It is amazing to see what’s all happening on Azure Integration! The Logic Apps team regularly post their updates on YouTube. At our blog, we publish recaps of these updates. Below is a picture of the entire Microsoft Pro Integration team on a bright, sunny Friday morning at Gold Coast, Australia, during #MSAUIgnite. 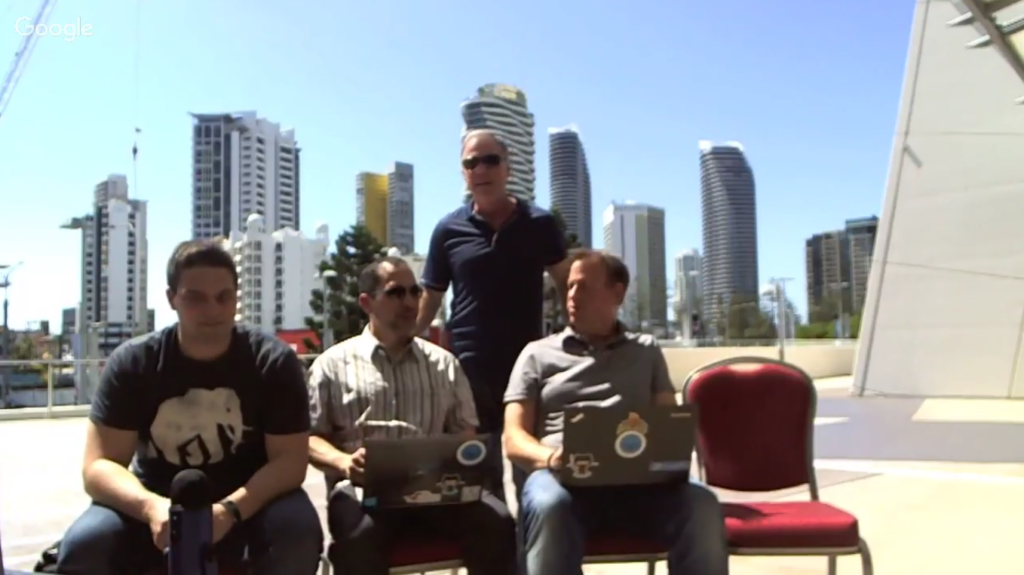 See below, just a couple of all the developments which have taken place:

Logic App-adapter – this adapter enables you to receive or send messages from BizTalk Server 2016 to your Logic Apps, via the On-Premise Data Gateway

Numerous improvements to the Logic Apps Designer – just a few which are worth to mention: editing Azure Functions directly from Logic Apps, generating JSON schema from sample payload, Parallel creation in the designer, use of Webhooks in Foreach loops, use of variables, batch processing, advanced scheduling of Logic App execution

Azure Event Grid – The newest and hottest kid in town; technical preview version was released by Microsoft on August 16th

The most recent recap of the Logic Apps update can be found here:
https://blogs.biztalk360.com/azure-logic-apps-monthly-update-november-2017/

Of course Microsoft will keep on bringing new and exciting features and improvements. What we currently know is that we can expect a new feature pack for BizTalk Server 2016, being Feature Pack 3. But also on the Azure side we can expect new stuff and enhancements of existing features.

During the first half year, we can expect the release of BizTalk Server 2016 Feature Pack 3. What we currently know, is that we can expect multiple Office 365 adapters, with the following capabilities:

Further, we can expect: 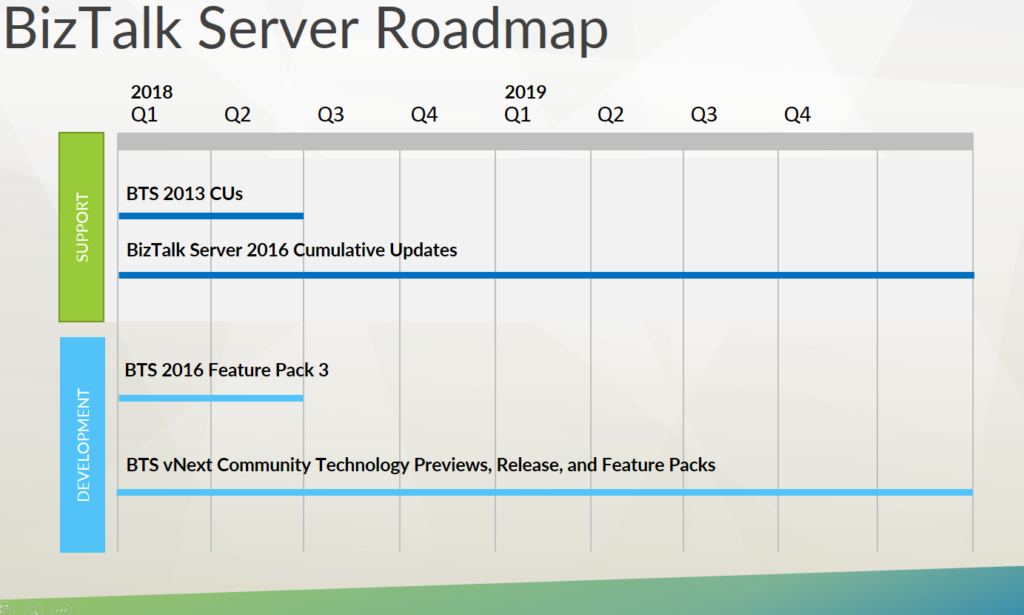 Besides that, Microsoft will keep on bringing CU’s for the supported BizTalk Server versions, including the final CU’s for BizTalk 2013 and 2013R2.

In Azure, we can expect of course more adapters. The Logic Apps team has already mentioned amongst others: SOAP Passthrough, Office365 Excel, K2, Kronos, Citrix ShareFile and PostgreSQL.

We’ll also see more improvements in the designer. Features like Complex Conditions within the designer, Configurable lifetime and Degrees of parallelism for split-on and request triggers have already been mentioned by the team.

All in all, we can conclude that 2017 has been an awesome year for Microsoft Integration and we can expect that 2018 will be a fantastic year as well!

You can get to know more about these updates directly from the Microsoft Product Group at INTEGRATE 2018. The dates and the venue for the event has been finalized. The website will be going live by this week. Stay tuned!

Lex Hegt works in the IT sector for more than 25 years, mainly in roles as developer and administrator. He works with BizTalk since BizTalk Server 2004. Currently he is a Technical Lead at BizTalk360.

View all posts by Lex Hegt