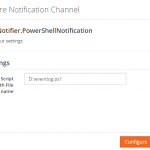 Notifications are an established concept for alerting users. By default, a number of external notification channels are inbuilt into BizTalk360. The only step you need to do, is to configure these notification channels with the appropriate URL, Access Token value (for Slack) and Authentication settings (for ServiceNow and WebHook), and Teams WebHook Connector (for Microsoft Teams). What this means for you, is that if you are already using either of these channels in your organization, it becomes easier to receive alerts from BizTalk360 right into these channels.

Since previous versions of BizTalk360, the notifications from BizTalk360 can be sent through various channels like:

Now, integration with PowerShell allows you to execute a PowerShell script, each time an alarm is triggered when the threshold is crossed.

This was one of the features most requested by customers, as a nice to have requirement, as it would enable them to perform some tasks via a PowerShell script, each time the alarm was triggered.

It only takes a few steps to use the PowerShell Notification Channel:

Both steps are explained below. 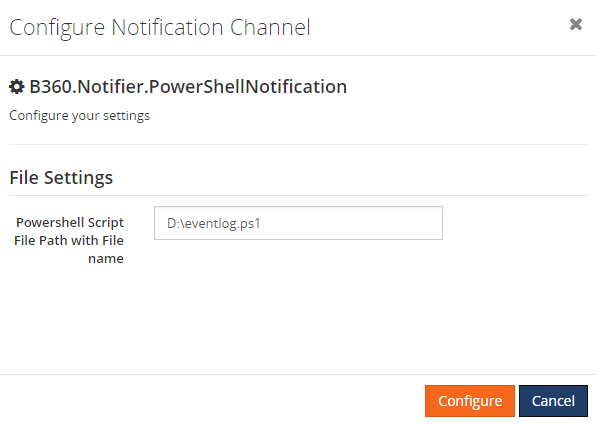 During the configuration, provide the path along with the file name where the PowerShell script is present.

Note: Unless you wish to override the script provided in the settings page, there is no need to provide the path once again 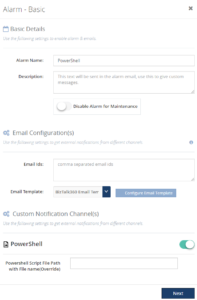 Whenever a violation appears for the given alarm, this will trigger the notification channel and it will hit the PowerShell script.

Here, in the sample PowerShell script(Restart.ps1), we have included some basic code to restart the BizTalk360 Analytics service, but you can include more complex code to perform any actions via a Powershell script.

Consider the following setup – Microsoft CRM plugins, connected to a Receive Location are failing periodically. When they are down, the customer gets flooded with suspended instances. To prevent this from happening, the user wants to Disable the Receive Location.

This is how we can implement this using BizTalk360.

A customer uses Data Monitoring for monitoring running instances of a particular orchestration in BizTalk. Sometimes it occurs that the application generates more messages than the downstream system can handle. To prevent damage, the Host Instances which serve the BizTalk application, need to be stopped to be able to identify the root cause.

We can implement these scenarios using BizTalk360 using similar steps as scenario1 but now the Alarm will be a Threshold alarm, not on Application artifacts but in BizTalk Environment -> Web Endpoint Monitoring.

Like scenario1 the alarm will have PowerShell notification enabled and when the Web end-point is triggered when the response is not fast enough, the Powershell script will run and restart the windows service (This should be programmed in the .ps1 file)

So, I hope these scenarios gave you a good idea of how the PowerShell notification channel can help you. This can also be considered as an action to be carried out if the alarms are triggered.

Rochelle Saldanha is currently working in the Customer Support & Client Relationship Teams at BizTalk360. She loves travelling and watching movies. View all posts by Rochelle Saldanha