BizTalk Server 2020: PowerShell to Configure Host, Host Instances and Adapter handlers according to some of the Best Practices 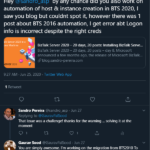 In the past, I wrote several blog post about Configuring BizTalk Server Host and Host Instances according to some of the Best Practices:

The reason I end up creating a new version for BizTalk Server 2016 was that previous scripts only did 90% of the work, and they were intended to be used on “day zero” of your environment, i.e., after you finish installing your environment.

So, I update my previous script to add more functionalities, mainly:

With these missing functionalities added to the script, it will configure or reconfigure 100% of your environment. You can use it on “day zero” or in an already up and running environment. Of course, this was optimized to BizTalk Server 2016 (but it can be executed in all precious BizTalk Server previous versions).

Why a new version dedicated to BizTalk Server 2020?

There are two reasons why I decide to create this new script, specific only to BizTalk Server 2020:

The first reason is very simple. The previous scripts will not work giving you an invalid credential error even though you are putting the correct credentials has Gaurav Sood kindly reported to me.

The reason why this error is happening was because one undocumented change that product group made on the MSBTS_HostInstance WMI Class and now the method Install has a new mandatory parameter:

Now the method parameters will be:

The second reason is related to the first one. Now BizTalk Server 2020 has support Group Managed Service Accounts (gMSA) and since I’m changing this script I also want to add support to this feature.

What is Host and a Host Instances?

The BizTalk Host is a logical process and security boundary within BizTalk Server that represents a logical set of zero or more run-time processes in which you can deploy BizTalk Server services and artifacts (such as adapter handlers, receive locations, and orchestrations). Each host has a security group assigned to it and may contain multiple host instances, each on an individual machine, that perform the work of the host.

What is an Adapter Handler?

The default BizTalk Server configuration will only create one in-process host, “BizTalkServerApplication”, that will be associated as a receive and send adapter handler for all of the installed adapters, with the exception of HTTP, SOAP, WCF-BasicHttp, WCF-WSHttp, and WCF-CustomIsolated adapter receive handlers that can only be running in an isolated host.

How can I automate this task?

Windows PowerShell is a Windows command-line shell designed especially for system administrators and can be used by BizTalk administrators to help them in automating tasks.

This is a simple script that will configure the following components in your environment:

The script can be found and download on GitHub:

The post BizTalk Server 2020: PowerShell to Configure Host, Host Instances and Adapter handlers according to some of the Best Practices appeared first on SANDRO PEREIRA BIZTALK BLOG.