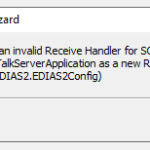 I have to say that I saw bizarre error messages during these long years as a consultant, but this one gained direct entry into my TOP 10 for a straightforward fact: there isn’t a SQL Adapter on BizTalk Server 2020. The adapter was deprecated since BizTalk Server 2006 R2, and they decided to remove it in this last version of the product. So, when I saw this error message appearing on the BizTalk Server Configuration Console:

On a small note, because of issues happening during the configuration process, I didn’t perform a full configuration in one shot. In this case, we took the approach of configuring feature by feature, step-by-step.

BizTalk Server 2020 Cumulative Update 2 and then try again to configure this feature. But I soon realized that this wasn’t the issue, neither the solution since the problem continues to happen. But, again, I have done several BizTalk Server 2020 installations since this last version was released and never got this error. And some of them were almost immediately when 2020 was announced and available.

I was almost ready to install the old and deprecated SQL Adapter in BizTalk Server 2020 to see if that solved the issue when I decided to have a look at the services and see if all the services were running. Shocking surprise Enterprise Single Sign-On Service wasn’t running… So again, this time I decided to start the SSO service and then try again to configure this feature… and everything worked. I was able to configure this feature in BizTalk Server 2020.

The solution is simple: