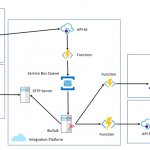 Recently I have been looking at some opportunities to utilise the new Model-Driven capabilities in Power Apps. I spent some time at Integrate 2018 chatting to Kent Weare about some of its capabilities and realised it was a great fit for some of the architecture challenges we have. Before I go into some of the opportunities in a sample architecture lets consider an existing setup.

In the existing architecture we have a cloud hosted integration platform which the company uses to integrate partners into Dynamics CRM Online and some existing on premise line of business applications. The cloud integration platform is able to support partners submitting data via multiple channels. In this case we have a traditional SFTP and batch based mechanism which old school partners still use. With this pattern we use BizTalk where it excels on the IaaS part of the platform to manage multiple partners submitting different file formats all being converted to a canonical format and then messages are loaded into systems via helper functions on Azure which implement the service façade pattern.

You can see this in the diagram below represented by Partner B.

We also have partners who use more modern approaches to integration where we expose an API via Azure APIM which allows them to submit data which is saved to a queue. BizTalk will process the queue and reuse the existing functionality to load data into our core systems.

While we support 2 example channels in this architecture, we have a massive partner network with different capabilities and some partners even use a person to person and email based interactions. If you imagine a person in a call centre is sent an email with some data or a form in the post and they will type the data into systems manually.

As the application architecture expanded there were more systems these users would need to work with and we needed to find efficiencies to optimise the user entering data. The more records a user can enter in 1 day the bigger the potential cost savings.

The challenge with this was to provide a new form to enter data that was simple and quick. We initially looked at options like Microsoft Forms and Cognitio Forms which could allow us to create forms to capture data but they missed ticking boxes on some of the key non functional requirements such as security and authentication. We needed something which had more features than these options which were good but too simple.

Above we do have Dynamics CRM but the key problem with that like our other applications is that it is tied to a product backlog which means our changes and optimisations would need to fit within an agile release process which was delivering change in a complex system. What we really needed was a sandbox type application where we could build a simple App without many dependencies which would then integrate with our processes.

Coming back to the discussion with Kent, I could see that model driven Power Apps is really like a cut down version of Dynamics and looking at some of the apps in the samples and that people are building you could see straightaway this could be a great opportunity. The Power Apps environment allowed us to build some forms and a data model very quickly to model the data we need users to capture.

We then implemented a logic app which would fire on the update of a record which would check for a field being set to indicate that the record was ready to be published. The logic app would extract the data from the Power App. The really cool bit was that I can use the Dynamics connectors in Logic Apps because the Power App is really just a Dynamics instance. The Logic App puts a message on a queue which is then used to reuse our existing integration.

The below picture represents the architecture from the perspective of the new Power App. Please note that to keep the diagram simple I have omitted the existing B2B SFTP and API integrations so that we can focus on the Power Apps bit. 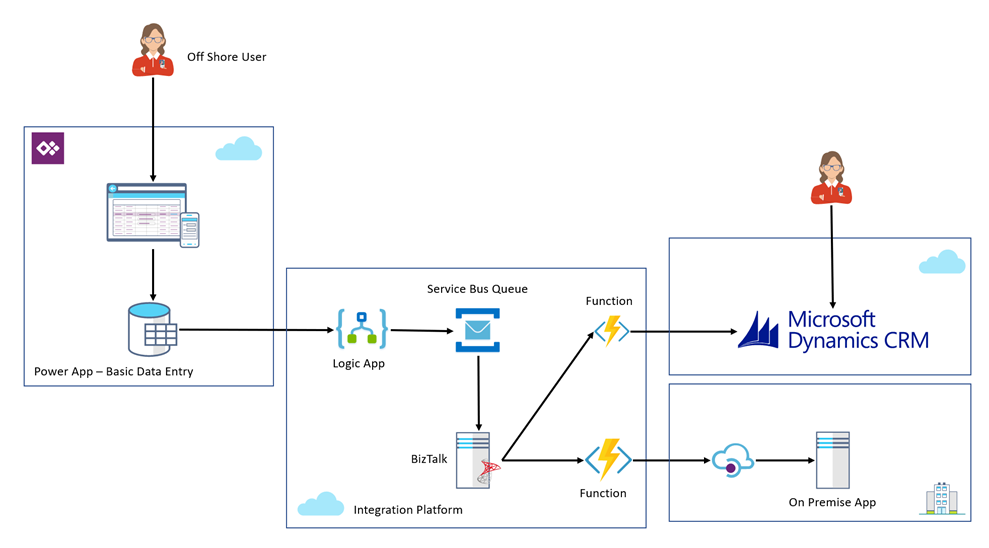 From this point I now have a pretty simple Power App which can allow these users to input data manually into our process which we think can save a few minutes per record based on manually keying the record in the old ways.

The benefits of Power Apps though are way beyond just this, first off the key to empowering rapid change is that its in an isolated app focusing on just this use case. I don’t have to worry about all of the many features within a bigger CRM implementation. When it comes to implementing changes and regression testing things are much simpler.

At the same time the licensing is slightly different with Power Apps our users are using P1 licenses which aren’t that expensive and good for users who just run the Power App. we use P2 Power Apps licenses for those users who need to admin and develop the Power App.

We also get for free the integration with Azure AD so that our users have a good authentication story. This was one of the challenges with our previous considered options. The products we looked at which provided out of the box forms capability seemed to lack the ability to authenticate then restrict the users to just certain users and to then know who filled in which form. This is a key requirement.

When it comes to many of the other security scenarios as existing Dynamics users we have already gone through the governance around what Dynamics is, how it works, its security, etc. The model driven Power App seems to be just the same in terms of capabilities.

At one time we were considering building an ASP.net app for our users and when you consider everything PaaS on Azure offers for very little cost it would seem an attractive option, but compared to these new more powerful Power Apps I think removing the considerations about hosting, security, custom coding, design experience, etc you get so much out of the box that it’s a compelling argument to try the Power App.

At this point Power Apps seems to be offering a great opportunity for us to build those utility applications and system of engagement applications on an enterprise ready platform but without lots of custom development. Really focusing on delivering business value there seems to be loads of places we could use this.

Hopefully we can provide more info about Power Apps as our journey progresses.