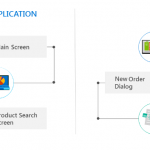 Recently on Integration Monday, I presented a chat bot which can be used to administer BizTalk, hosted on premises, using a chat bot, Logic Apps and the On Premises Data Gateway. The session can be found at Administering BizTalk Server with a Chatbot. This blog post is aimed at discussing the session.

For a product company serving its customer, there are few areas where the company executives need to work with their customers. These activities can be broadly classified into two categories:

Let us take a brief look at each of these categories.

For the conversation in the customer service category, the general mode of conversation is use of emails, phone calls or support websites. While in the Brand Awareness category it is generally emails and calls.

Now consider what if the conversations are delivered to the customers at their fingertips? This is possible by creating virtual assistants tailored for the functions specific to the product. These virtual assistants, when imbibed with the power of Natural Language Processing and Cognitive services, help customers converse with the company and get their intended work done.

This not only makes conversation available to customers at their fingertips, but also saves a lot of money for the company by automating most of the before mentioned tasks.
This concept of providing “Conversation” as a service to the customers through virtual assistants is generally termed as “Conversation as a Service”.

Chat bots are the starting point of Conversation as a Service as they pave a way to build full-fledged virtual assistants.

What Are Chat Bots?

Now that we have seen what Conversation as a Service is and how bots fit into this, let us analyse how the chat bots are different from a regular web application. Consider a scenario where you want to buy a laptop. In such scenario in normal web application, you would generally follow below steps:

Now let us try to convert these steps to how a chat bot would process the laptop request. Following image shows the comparison between the web application and the chat bot.

A chat bot does not have a traditional UI where the user navigates from one page to another, bots have dialogs that correspond to a particular web page in a web application. So, to order a laptop the chat bot would use following dialogs:

In a nutshell, chat bots are just like normal web applications but instead of having a breadcrumb-based web page approach, bots use dialogs to collect and display information. Each dialog only supports a single responsibility akin to the single responsibility principle of software design.

Now that we know what Conversation as Service is and how and what chat bots are, let us take a look at the tools and frameworks we use to build the chat bot. 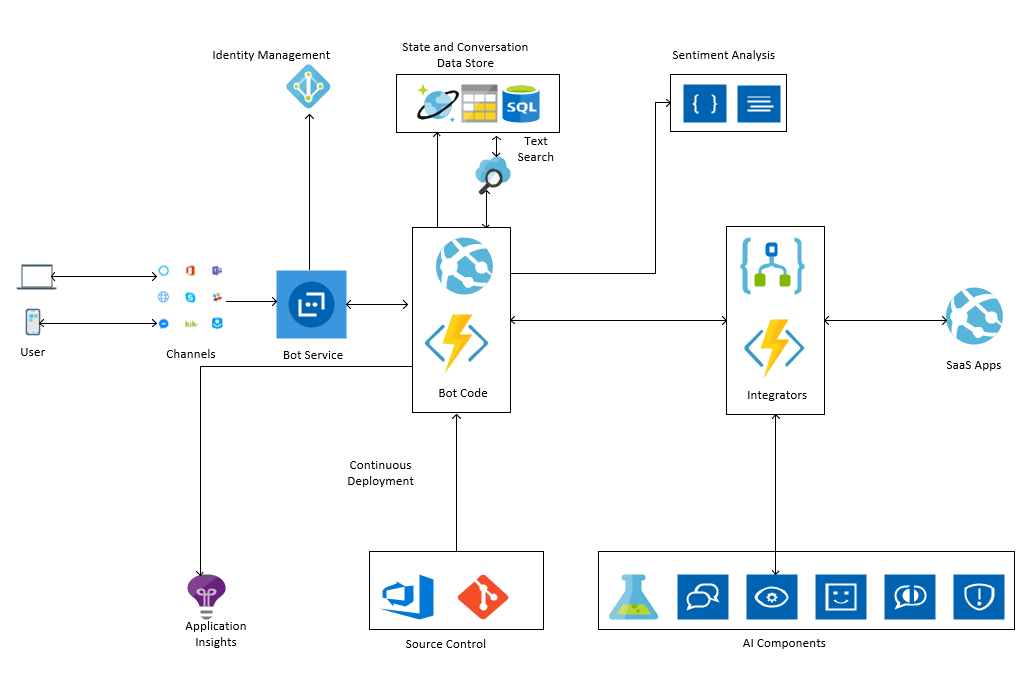 Let us take a look at each of the blocks in brief.

Now that we have seen what a typical bot looks like, let us move on to the BizTalk Admin Bot. I have named this Bot “The BizMan” as it administers the BizTalk server. The name and the superhero persona were conceived by Sandro Pereira . The post is available on his blog at BizMan, The BizTalk Server SuperHero Sticker 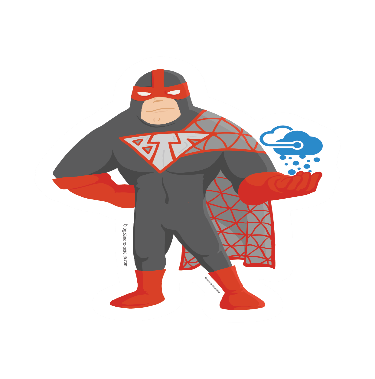 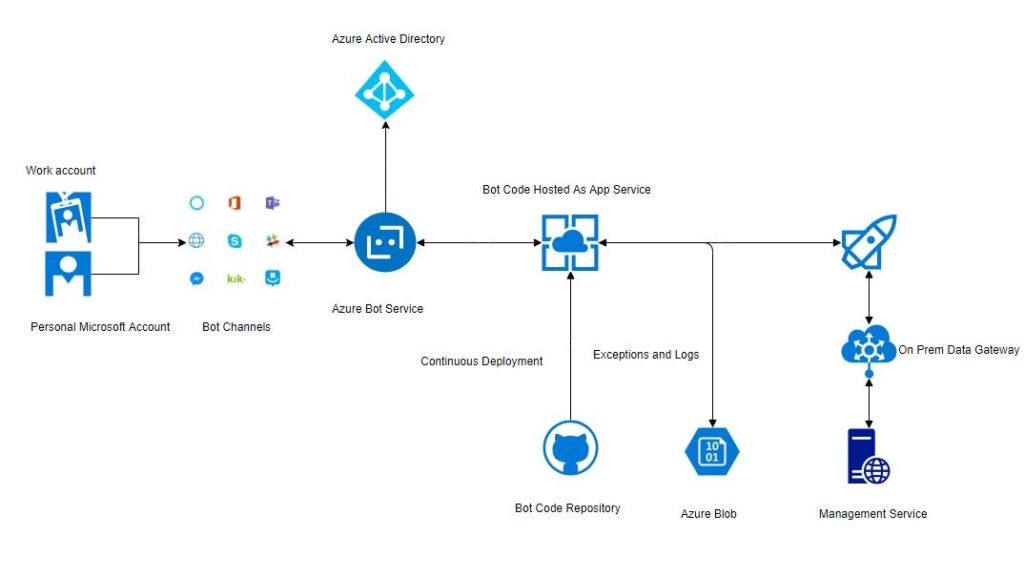 BizMan Requires that the user is a valid user in the Azure Active Directory and can be authenticated successfully. BizMan uses Blob Storage to store the logs and suspended instances reports. It uses Logic Apps to communicate with the BizTalk Management service (which comes with the BizTalk 2016 Feature Packs). This communication takes place using the On Premises Data Gateway.

The Management service that comes with Feature Pack 1 for BizTalk 2016, allows us to administer BizTalk Server using the Web API. This service also comes with a pre-authored Swagger definition which gives us the details about the various operations available in the service. This enables us to create a custom Logic Apps connector to communicate with this Web API. So, we just upload the Json file containing the Swagger information of the API and set up Windows authentication using an account which is part of “BizTalk Administrators Group”. This allows us to easily consume various operations in the Web API in a Logic App. A sample snapshot of the Logic App is shown below.

As will be clear, it is very easy to create the Logic App and add new operations, if we use a Custom Logic Apps connector.

The typical flow for the bot is shown below. 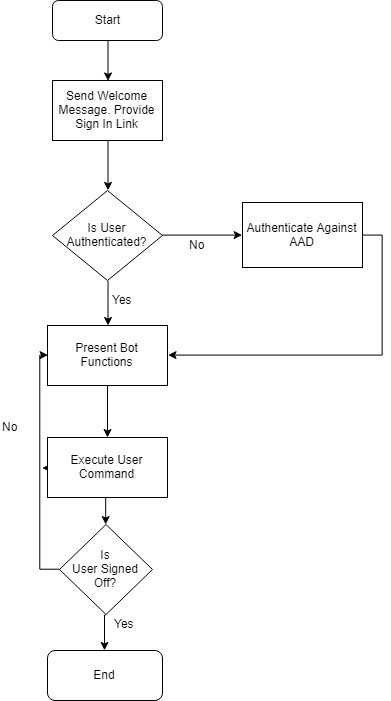 The BizMan is able to perform following tasks:

The options are presented to user as a big adaptive card as shown below. 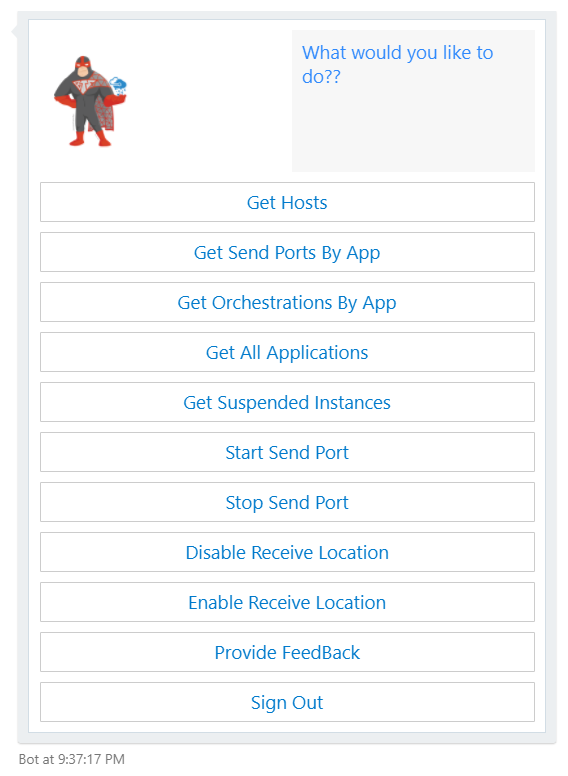 Let us take a look at some of the operations available in the bot.

Let us explore this operation in detail. In this operation, the User initiates the command by clicking on the Enable Receive Location option available from the operation card as shown below. 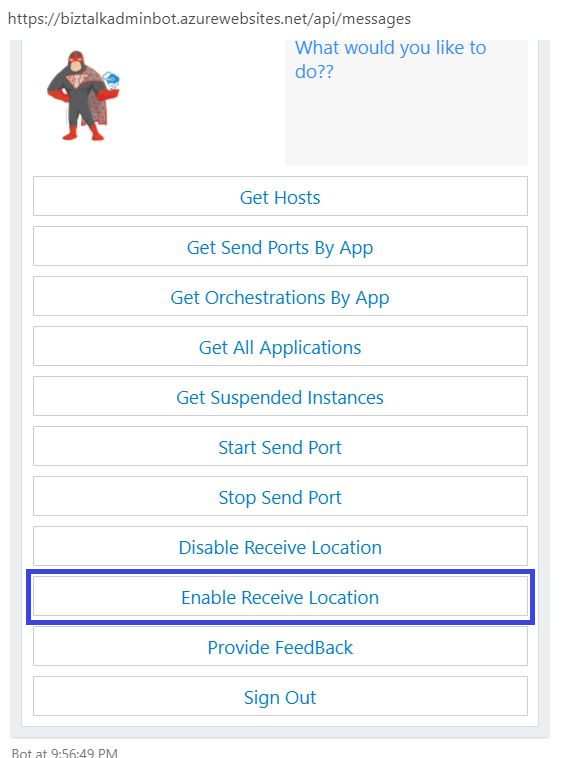 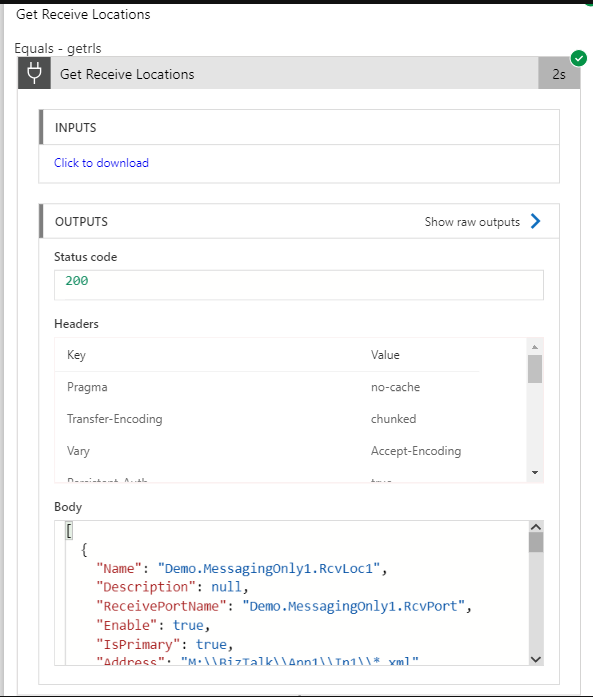 Once the list of the receive locations is available, the bot filters the list based upon the “Enable” flag received in response. So, for the “Enable Receive Location” operation, only the disabled receive locations are populated and the user is presented with a drop-down list to select a location from. A sample is shown below. 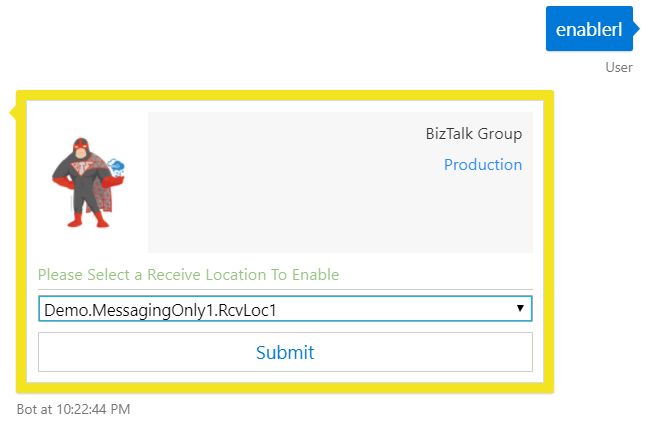 Once the user clicks on the Submit button, the bot code initiates another call to the Logic App which in turn calls the On Premises BizTalk management service and enables the receive location. The Logic App Request response is shown below. 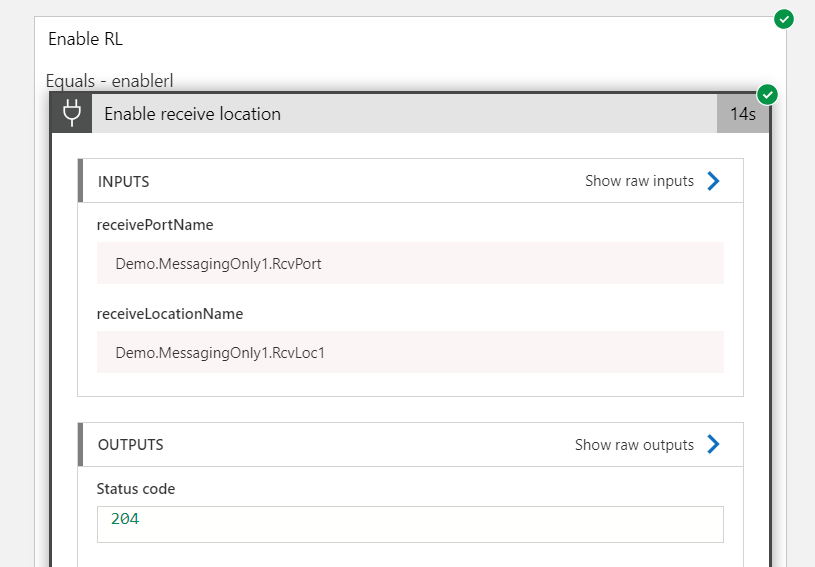 Once the receive location is enabled, the user gets a response that the “Operation Completed Successfully.” 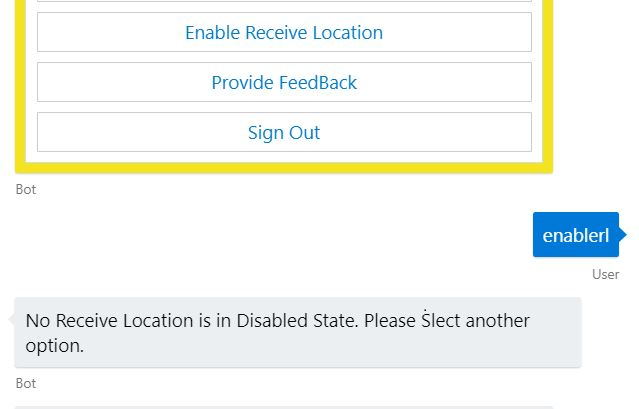 Note: Similar logic is applied in following operations available in the bot:

The operation is initiated when the user selects the Get Hosts operation from the list of available operation. 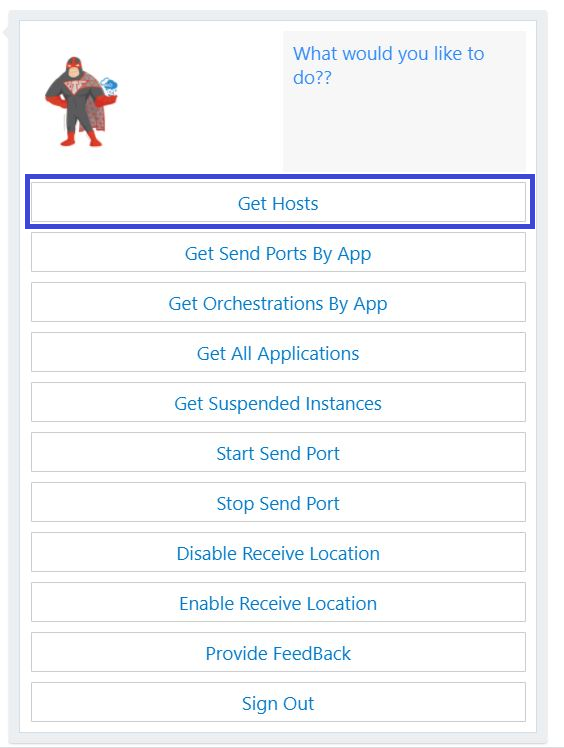 This initiates a command “gethosts” to the bot code. The code checks its cache to check if there is a list of hosts available with it. If it finds the list, the hosts are displayed to the user. In case the list is not available, the bot will initiate a call to the Logic App which calls the On Premises BizTalk management service and gets the list of the hosts. The response displayed to the user as an adaptive card shown below.

This operation, as the name suggest, brings the list of the Suspended Instances from the On Premises BizTalk environment. In this case, no caching is implanted as the number of suspended instances can change on a per second basis in a high load environment. In this operation, a small report is displayed to the user which contains the suspended instances grouped together as shown below. 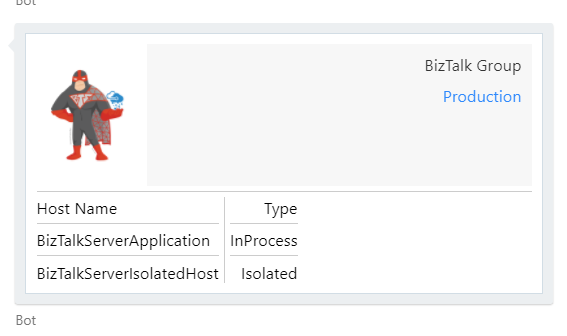 This card gives the user an option to view a detailed report and provides a button to open the report. Once the user clicks on the button, it directs the user to a HTML web page which contains details about the suspended instances. In this case, the detailed report is stored as block blob in the azure storage account. This blob is available only until the point the user is actually logged in the session in the bot. The blob is deleted upon the end of the session.

In similar fashion, additional features can be added to the bot by adding new switch cases to the logic app and accounting for them in the bot code.

In order to get started with building chat bots, the following MSDN documentation are the go-to links.