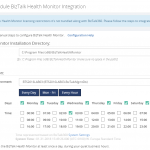 The BizTalk Health Monitor (BHM) and its predecessor MessageBox Viewer (MBV) are important tools to learn about the overall health of BizTalk environments.
The tools are developed and maintained by Microsoft and firstly used by their Premier Field Engineers, to help them identify problems with BizTalk environments. Later, the tool became publicly available, enabling BizTalk administrators to run the tool themselves as well. Since that time, we have seen many updates of the tools, although MBV is deprecated for few years now.

The BizTalk Health Monitor can be downloaded here:

The best practice is to run BHM frequently, say once per day at a quiet time, to be aware of overall health and check for any critical issues.

MBV did not offer a built-in scheduler, so you had to schedule it yourself with Windows Scheduler. With the introduction of BHM, the tool came with a plugin, to use it from the BizTalk Server Administration console and it also came with scheduling features.

Once scheduled, you’ll receive the output in the configured mailbox. So you have the fully detailed report easily at hand.

Although it’s good to have the output of MBV/BHM runs in your mailbox, we think that the overall experience still can be improved.

In your day to day activities as a BizTalk administrator, you might receive many notifications in your mailbox. If not setup properly, the amount of notifications might be overwhelming, which might result in starting to ignore the notifications, thereby risking to miss important notifications.

So, you will want to focus on just the notifications which indicate something needs to be taken care of. In case of the MBV/BHM output, you will only be interested in critical and non-critical errors on which some actions must be taken. In other words, if all is healthy, you might not be interested to receive that output at all.

With BHM you will always receive the output, regardless if all is healthy or some (non-)critical issues exist. No clear notification can be received, in case something serious is going on.

Besides that, MBV/BHM is another tool/console you need to be aware of to consider the overall health of a BizTalk environment. As we want to apply our One Platform philosophy as much as possible, we brought integration with MBV/BHM to BizTalk360.

In the next section of this article, we’ll show you how BizTalk360 helps you to improve the experience of BHM and how you can have monitoring on the output of MBV/BHM runs.

BizTalk360 has integration with MBV/BHM for many years. This integration enables the BizTalk360 user to schedule MBV/BHM and view the output of the different runs of the tool directly from within BizTalk360. 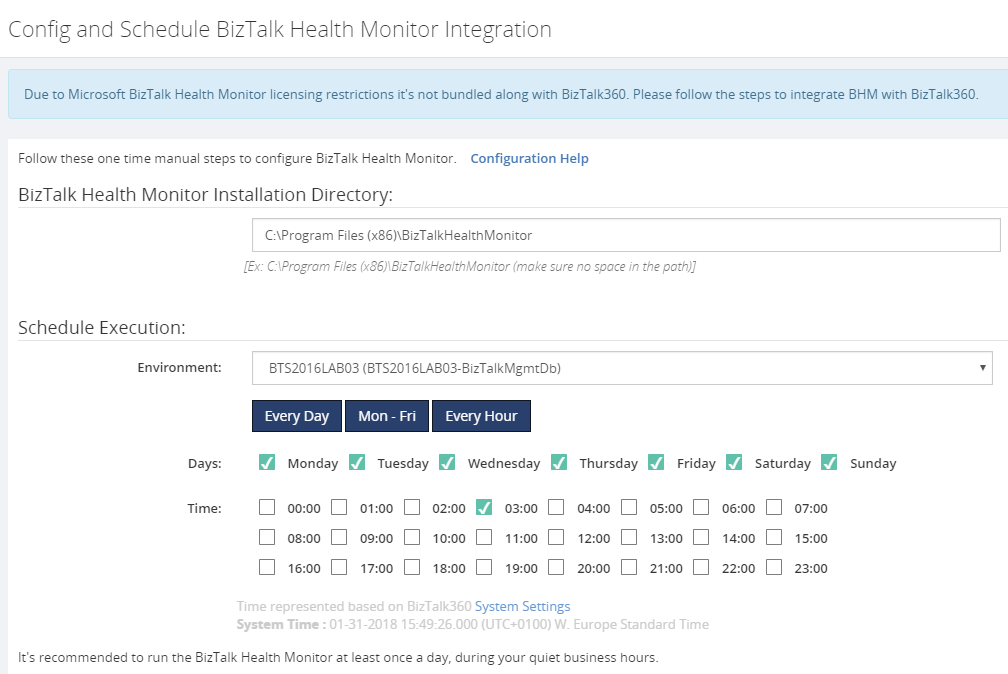 This makes it easy to run MBV/BHM and view its output in BizTalk360, instead of delivering the output of each run to the mailbox of the user.

However, this does not yet solve the problem of just being notified in case of critical errors. To achieve that, you can simply add the BizTalk Health Monitor to a BizTalk360 alarm. In BizTalk360, you can do this by navigating to Monitoring => Manage mapping => BizTalk Environment => BizTalk Health Monitor. Here you can configure how many critical or non-critical may occur in the output of BHM, before a notification is being sent.

As you can see from above screenshot, under Error Threshold, you can configure how many critical/non-critical errors may exist, before a notification is being sent. From the Current Configuration of the screen, you can see that in the last report there were 2 critical and 20 non-critical errors. So, in above scenario, the error thresholds have been met and a notification will be send.

If you want more fine-grained monitoring of the BHM output, BHM offers you the option to store the output of the BHM runs in a database. Say, you want to monitor on specific categories like Tracking or the BizTalk jobs, you could achieve that with Database query monitoring.
When you would like to know more on how to set this up, feel free to contact us (support@biztalk360.com) and we are happy to work with you on the scenario at hand.

The integration of MBV/BHM with BizTalk360 adds to the One platform philosophy. By also bringing monitoring of the output of MBV/BHM, we remove some of the clutter which appears in the mailbox of the user, providing good focus on the topics which really matter. With some customization, you could have even more fine-grained monitoring on the output of BHM.

There are some more articles on MBV/BHM integration. Check them out here:

Get started with a Free Trial today!

If you would like to try BizTalk360, why not give it a try. It takes about 10 minutes to install on your BizTalk environments and you can witness and check the security and productivity on your own BizTalk Environments. Get started with the free 30 days trial.