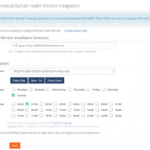 Just like with the Message Box Viewer, it is advised to run BizTalk Health Monitor on a regular basis. The tool comes with most recent versions of BizTalk Server and needs to be installed on the BizTalk Server. The tool can also be downloaded here:

Once you have installed BHM, you can setup scheduling so you will automatically retrieve health reports in your mailbox.

Although BHM contains important information on the health of your BizTalk environment, it is yet another console you must be aware of. Especially organizations with less knowledge of all the consoles needed to support BizTalk Server, this one can easily be overseen or forgotten, with potentially, catastrophic results.

To be able to access BHM, be it for configuration of the runs of BHM or viewing (historic) reports, you need Remote Desktop access to the BizTalk server on which the BizTalk Health Monitor software is installed. Logging in to the BizTalk server repeatedly is time-consuming and can prevented by using the MBV/BHM integration which is discussed in the next paragraph.

As you probably know, the vision behind BizTalk360 is to provide One platform for BizTalk Server. By providing One platform, aka one user interface, we bring all the different consoles, a BizTalk administrator might need to be able to do his job, under one hood.
For that reason, we already brought integration with Message Box Viewer years ago and updated the integration to support the BizTalk Health Monitor. This integration exists of the following features:

For many years, BizTalk360 already had integration with the predecessor of BizTalk Health Monitor, being Message Box Viewer. This integration included the scheduling capability, which was brought by BHM, when the tool became available, as well.
So, when we replaced MBV integration with BHM integration, of course we made sure that you would be able to setup BHM schedules from BizTalk360 as well. 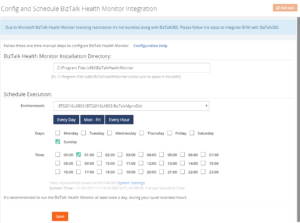 BHM allows users to create specific so-called Monitoring profiles, which can be used to execute a subset of all the available queries and rules. This can be used, for example, to monitor just specific components or artifacts.
BizTalk360 allows you to run or monitor on such a profile, by creating such a profile in BHM and manually copying it to the BizTalk360 installation folder. If you want to read more about this capability, read below article:

Getting BizTalk360 to run a BHM Monitoring profile

Besides being able to run BHM based on a schedule, as shown in the previous paragraph, you can also run the tool immediately from BizTalk360. By clicking the ‘Run BHM Now’ button (see the picture below), BizTalk360 schedules a run immediately and the results can be checked after the run has been processed.

The reports of all the different runs of BHM can be viewed directly in BizTalk360. The screenshot below shows the dropdown from where you can select, which report you would like to see. The most recent report is shown on top.

Storing the output of BHM runs
The BHM reports are stored in the BizTalk360 database and can reside there for a configurable time frame. By default, this time frame is 5 days, but you can choose values between 1 day until any number of days/weeks/months you prefer. Of course, it is wise to not to keep the date for too much time, as this will affect the size of the BizTalk360 database.
After the time frame expired, BizTalk360 will automatically delete the expired reports. 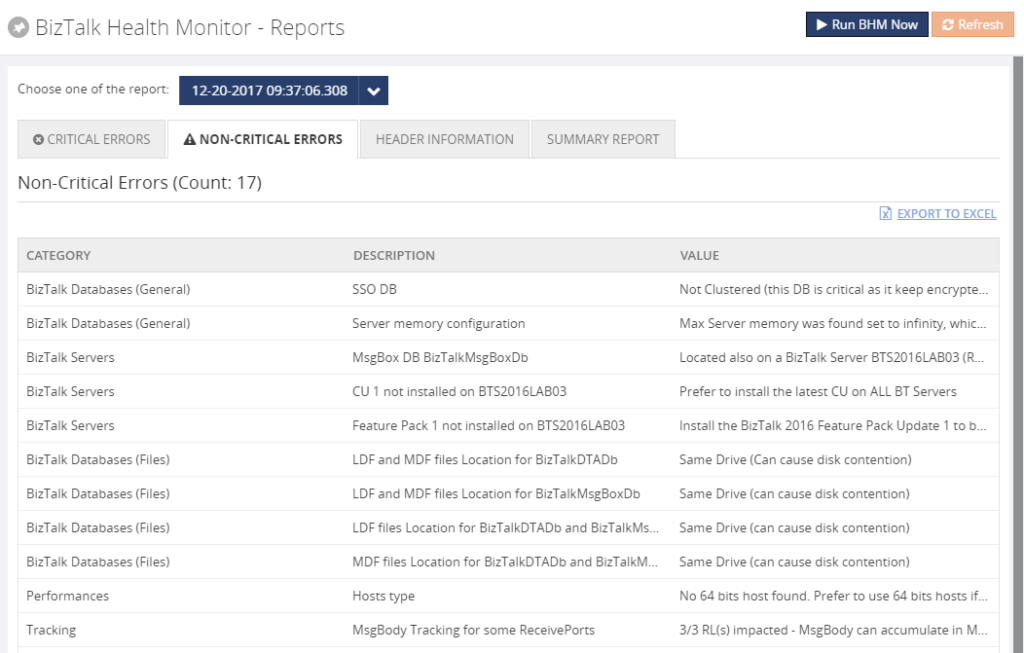 Monitor the results of BHM runs

Besides running and viewing the output of BHM, you can also setup monitoring on the output. This way you can get notified easily of critical and non-critical errors which might be found by BHM.

In another article of the `Why we built XYZ feature in BizTalk360` series, we`ll explain monitoring of BHM output in more detail.

By executing BizTalk Health Monitor runs, the tool reports about important topics on all kind of health and best practice related stuff. Having MBV/BHM integration in BizTalk360, the product makes it easier to schedule runs of BHM and provides you with easy access to the output of the BHM.

Get started with a Free Trial today!

Do you prefer to setup your BHM schedules and view BHM output in BizTalk360, instead of setting up RDP connections to your BizTalk server? Why not give BizTalk360 a try! Installation takes about 10 minutes on your BizTalk environment. Get started with the free 30 days trial.