What do I need to do to start developing stateful or stateless workflows – Azure Logic Apps (Preview)? (Part III) 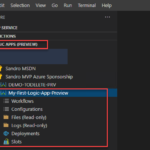 Finally, the last chapter of this blog post series where we address:

Today, I will start to explain a different and more powerful way for you to create your Logic Apps (Preview) projects and workflows. Notice that, for this approach, you need to have all the prerequisites installed; otherwise, it will not work correctly or at least certain features like Logic App Designer, debug, or inline code.

If you are like me, a developer used to work with Visual Studio as his primary tool, then you need a little learning curve to start developer using VS Code. It is a different way to developer your solutions.

Before you can create your logic app, the first thing you need to do is to create a local project. This will allow you to manage and deploy your logic app from Visual Studio Code.

Note: Using the VS Code, there are multiple ways for you to:

I will approach and explain the way I prefer better and which I think is the most ideal.

Visual Studio Code reloads and will switch to the Explorer pane, showing you the workflow definition and your new Logic App (Preview) local project, which will include several automatically generated project files. For example:

Developing your Logic Apps in VS Code

Now that we have everything we need already created, we can start developing our logic apps locally on VS Code.

Note: If you have .NET Core SDK 5.x, this version might prevent you from opening the logic app’s underlying workflow definition in the designer. Rather than uninstall this version, in your project’s root location, create a global.json file that references the .NET Core runtime 3.x version that you have that’s later than 3.1.201, for example:

And the rest is basically the same that we are already used to doing it in our “original” Logic Apps, or using the Azure Portal or inside Visual Studio. We need to add a trigger and actions.

Now what we need before deploying this is to run and test this workflow locally.

On the Overview page, you will get another entry on the Run History.

How can I add more workflows to my project?

Can I add more workflows to my local project? If so, how can I do it?

Everything we created above is not created/publish on Azure, they were developed and created locally. Nevertheless, from Visual Studio Code, you can deploy your project and with it all your workflows directly to Azure. If the Logic App (Preview) resource type is not yet created, you can create in Azure during the deployment.

This will trigger the deployment process to Azure. Once the deployment is finished, you will be able to see your stateful workflows live in Azure and enabled by default.

The post What do I need to do to start developing stateful or stateless workflows – Azure Logic Apps (Preview)? (Part III) appeared first on SANDRO PEREIRA BIZTALK BLOG.