Visual Studio: Failed to create window handle for pane while trying to open a Schema

There are errors that we are familiar with, but I guess this you may never hear about it. I didn’t know it until today: Failed to create window handle for pane ”.

This happened today while I was trying to open a Schema from my BizTalk Server project. Every other artifact opened well in their designer/editor like Orchestrations, Maps, and Pipelines… with the exception of Schemas.

I try to force it open by the BizTalk Schema Editor by right-clicking on the schema, open with and select the BizTalk Editor (Default) without any result. 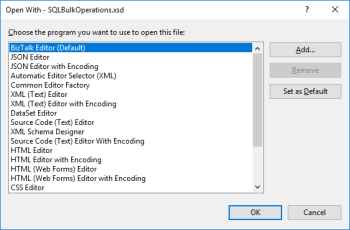 I even try to force it open with another editor like XML (Text) Editor – it worked by the way – and once again try to open by the Schema Editor, again, without any practical result.

Note: I had 3 visual studio instances opened with 3 different projects: 2 of them worked well and only one had this problem.

Also, when I try to close this particular Visual Studio instance, I got another error:

Microsoft Visual Studio: Object reference not set to an instance of an object

Honestly, I have no f*** idea… but I know the solution.

To solve this problem, you need to… do what we normally do when nothing works! 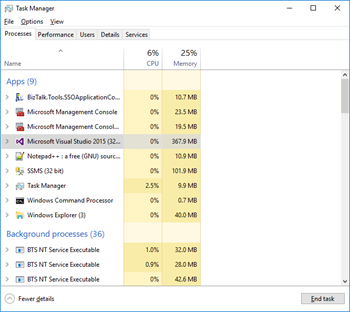