Revisiting “The Get-AzLogicApp command was not found”? 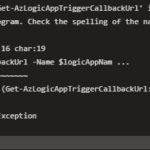 Last week, when preparing for a deployment, I bumped into this error again. As from my previous post, it could be easily fixed with a PowerShell module install.

You can review it here: https://www.linkedin.com/pulse/get-azlogicapp-command-found-pedro-almeida/?trackingId=LYhay%2BdvR7ieQ0XnCy9q0Q%3D%3D

But this time, the script was already fixed. Nothing had changed, as far as I knew. The last build and publish was in September, no errors there.

So what happened that killed my build?

It couldn’t be the Az module updates, because we were forcing the version. There had been several updates, so could this be it?

I tried to force a newer version, like 2.0.0, but still failed to execute the command. I even restricted the script to use only the command I needed, that was the CallbackUrl.

After a few other failures, my thinking was, “this can’t be the problem, the script was executing without issues, so it has to be something else.”

So I took another look at my pipeline. It was the same as before… Azure Powershell task to remove AzureRM, install Az module and Azure CLI task to execute the scri… wait!

Could this be the problem?

I switched the tasks and re-queued the pipeline.

And success! No more errors.

I looked into the Azure CLI release notes, but found nothing referring the LogicApp commands or Az.LogicApps.

This time, I can’t find a proper explanation for this error, but I’m suspecting some update broke the ability to run these Az module commands with Azure CLI or the Az.LogicApps commands specifically.

The post Revisiting “The Get-AzLogicApp command was not found”​ appeared first on SANDRO PEREIRA BIZTALK BLOG.