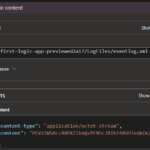 A few months ago I was involved in an integration project that required sending files to a local file system, that resided in an Azure VM.

This was a bit of an issue, because we had to use the ISE connector and it was in Preview at the time, we had to do a Proof-of-concept and make sure it worked properly.

It all went well, the integration went live and the client was happy.

A couple weeks ago, Michael Stephenson asked for my help, to solve an issue that he was having. The problem was on how to send files to another system.

Now, in an operative system, you’d just move the file over by code or using the UI. But in the integration with Logic Apps, what came out was a JSON message.

Of course you can copy files over to another Azure storage, but in this particular case, we were pulling files with a webservice and dropping them into a local VM. The OOTB connectors help, but they don’t create the file object on their own.

In my example, I’m using an Azure File Storage connector to get the file content. It mimics a Webservice where you’d get the same content. In this case, we’re also getting the content-type in the response.

If we set the File content to a variable, it will just send, well, the content itself. In my example, it’s a XML log file, so it’s actually translating the Base64 into a XML string, which is interesting. It might not be properly formatted, but it’s a string at the end of the day, instead of its Base64 representation.

So, we pick up the file, assign the string to a String object and set it to create in the end system.

This works, but creates a string file but this is not what we wanted. We also need to keep the MIME type of the file.

I’ve searched for help in how to achieve this, but there’s no information about it. This is quite shocking, because it almost sounds like Microsoft doesn’t want you to know how to do this or they didn’t took the time to document this.

The good thing, is that it’s quite simple to do this. The JSON object we need to create is extremely simple and very easy to understand how it works.

Let’s get another example. In this case, we have a SOAP web service that returns an array of fields, one of them being the Base64 for the file and the MIME type. This is the perfect example of our issue. As I’ve said before, if I just set the FileData field to a variable, it will end up in sending the string to a file, not caring about what type of file it is.

So, grab those fields into a JSON Parse action, we’re about to jingle some files into your system.

Create a Compose action and…

TA-Daaa! You just need to add a $content and $content-type fields in a JSON object and it will create your file.

It’s interesting that the GetFile connector provides the answer we needed, but as I’ve said, there’s no actual guide lines for this. There might be a few other metadata fields you can set for a file, I haven’t explored this yet, but it makes sense to be able to do it.

I hope this helps you and takes away one headache before Christmas.