When Logic Apps was first announced at the Integrate summit in Seattle a few years ago one of my first comments was that I felt that this could be an integration game changer for small business in due course. The reason I said this was if you look across the vendor estate for integration products you have 2 main areas. The first is the traditional integration broker and ESB type products such as BizTalk, Oracle Fusion, Websphere and others. The 2nd area is the newer generation of iPaas such as Mulesoft, Dell Boomi, etc. While the technicalities of how they solve problems has changed and their deployment models are different they all have 1 key thing in common. They all view integration as a high value premium thing that customers will pay a lot of money to do well.

This has always rules them out of the equation for small business and meant that over the years many SME companies will typically implement integration solutions with custom code from their small development teams. This was often their only choice and made it difficult because as they grow they would reach a point where they got to a certain size yet their integration estate would be a mess of custom scripts, components and other things.

What excites me with Logic Apps is that Microsoft have viewed the cost model in a different way. While it is possible to spend a lot of money on some premium features it is also possible to create complex integration solutions that have zero up front cost and a running cost of less than a cup of coffee. This mindset that integration is a commodity not a premium service can be put forward by Microsoft because they have a wide cloud platform and offering low cost integration will increase the compute usage by customers across their cloud platform. Other than the big cloud players such as AWS and Google its much harder for them to think of integration in this way because the vendor doesn’t have the other cloud features to offer. Likewise AWS and Google who do have the platform play don’t have any integration heritage so this puts

Outside of the integration companies, small business has looked at products like Zapier and IFTTT for a few years but these products can only go so far in terms of complexity of processes you want to implement.

Microsoft in a unique position where they have an integration offering with something for the biggest enterprise right down the scale to something for a one man band.

In Microsoft world if you’re a small company the likelihood is your using Office 365, there are some great features available on that platform and for my own small business ive been an Office 365 user for years. One example of how I use it is for my accounts and business finance. While I use it a lot, I do have one legacy solution in place from my pre-office 365 days. I had a Microsoft Access database which I wrote a small console app which would load transactions from the CSV files from my bank into it so I could process them and keep my accounts up to date. Ive hated this access solution for years but it did the job.

I have decided that now is a good opportunity to migrate this to Office 365 along with the rest of my accounts and finance info and this will let me get rid the console app.

The plan for this new interface was to use Logic Apps to pick up the csv file I can download from my bank and then load the transactions into an Office 365 SharePoint list and then copy the file into a SharePoint document library for back up.

At a high level the architecture will look like the below picture.

While this integration may seem relatively straightforward there were a few hoops to jump through so I thought it might be interesting to share the journey.

First off the thing to think about would be the Barclays file. I will always have to download this manually (it would be nice if I could get them to deliver it to be monthly). The file was a pretty typical CSV file but a couple of things to consider.

First there is no unique id for each transaction!! – I found this very strange but the problem it causes is each time I download the file the same transaction may be in multiple files. A file would typically have around 3 months data in it. This means I need to check for transactions which have already been processes.

2nd there is a number field in the file but this is not populated so ill ignore this for now.

3rd and most awkwardly is that its possible to have 2 or more rows in the file which would be exactly the same but refer to different transactions. This happens if you pay the same place 2 or more times with the same amount on the same day. Id have to figure out how to handle this.

I was going to implement the solution with 2 logic apps. The first one will collect the file, it will then process the file and do a loop over each record but each record will be processed individually by a separate Logic App. I like this separation as it makes it easier to test the Logic Apps. 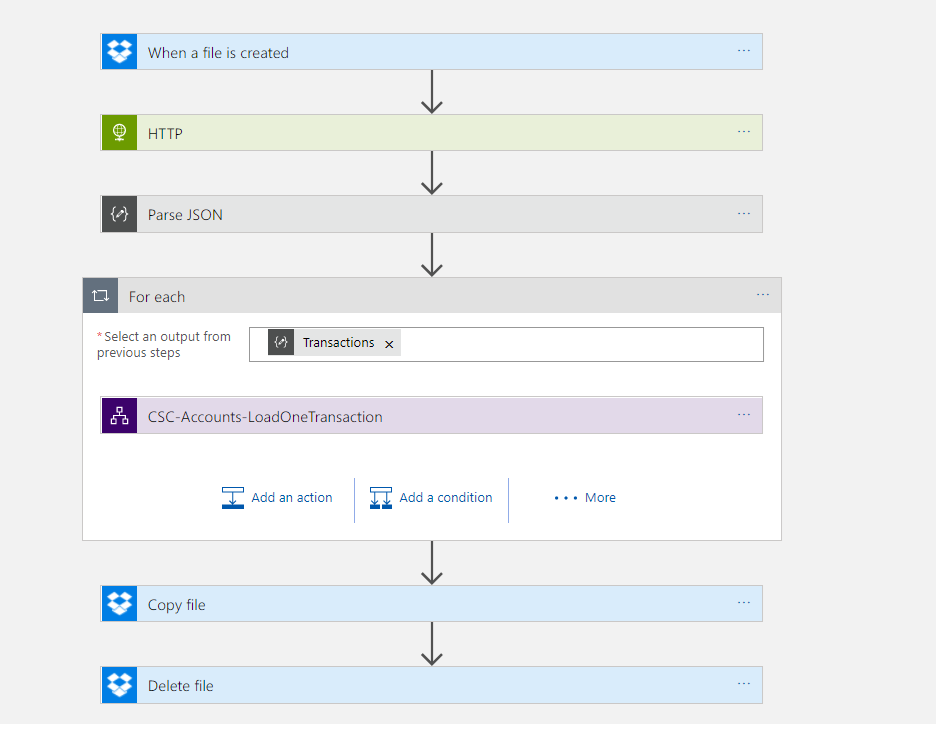 The main bit that is interesting in this Logic App is the parsing of the csv file. With Logic Apps if you have plenty of money to spend you can get an Enterprise Integration Account which includes flat file parsing capability. Unfortunately however I am a small business so I cant justify this cost. Instead I took advantage of the Azure Functions. In the Logic App I pass the file content to a function and then in the function I processed each line from the file and created an object model which will be returned as Json which will make the rest of the processing much easier.

In the function it was easy for me to use some .net code to do a bit of logic on the data and also to do things like trying to identify the type of transaction.

The big positive is using the consumption plan for Functions this means the cost is again very very cheap.

One interesting thing to note was I had some encoding issues calling the function from the logic app using the CSV data. I didn’t really get to workout the root cause of this as I could call it fine in Postman but I think its something about how the Logic App and its function connector encapsulate the call to the function. Fortunately it was really easy to work around this because I could just call the function with the HTTP connector instead!

The only other interesting point is I made the loop sequential just to keep processing simple so I didn’t have to worry about concurrency issues.

In the Azure Function I chose to tackle the problem of the duplicate looking transactions. The main job of the function was to convert the CSV data to JSON but I did a little extra processing to simplify things. One feature I implemented was to add a row key field. This would be used to populate the title field in the sharepoint list. This means id have a unique key to look up any existing records to update.

When calculating the row key I basically used the text from the entire row which in most cases was unique. As I processed records I checked if there was a transaction which already had that key. If it did I would add a counter to the end of it so if there were 3 rows with a row key id add a -2 and -3 to the 2nd and 3rd instances of the for to make them unique.

This isn’t the nicest solution in the world but it does work and gets us past the limitation from the Barclays data.

Below is an picture of the response object returned from the functions so you can see its just an object wrapping a list of transactions. 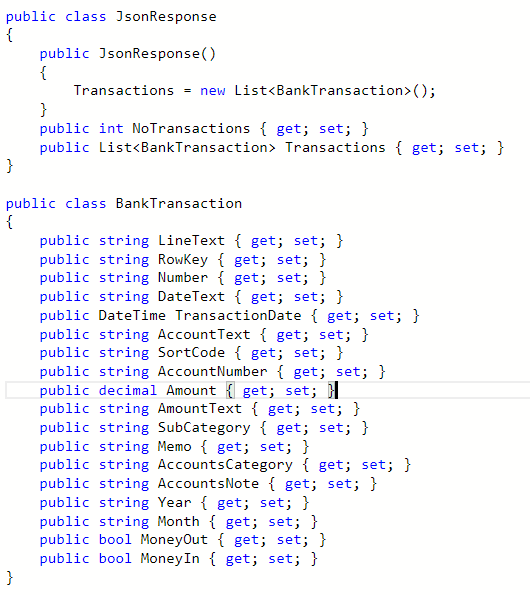 In this next section I am going to talk about how I implemented the solution. Please note that while this works, I did have a chat with Jeff Holland afterwards and he advised me on some optimisations which I am going to implement which will make this work a little nicer. I am going to blog this as a separate post but this is based on me working through how to get it to work with designer only features.

What’s interesting about this Logic App was the hoops to do the upsert style functionality. First off I needed to use the SharePoint Get Items with a query expression to “Title eq ‘#Row Key#’”. This would take the row key parameter passed in and then get any matches. I also used the return max records 1 setting as there would only be 1 match.

I also initialized a variable which I then counted the number of records in the logic app array that was returned. In my condition I could check the record could to see if there was a match in the query of SharePoint which would direct me to insert or update.

From here the Insert Item action was very straight forward but the Update Item was a little more fiddly. Because get items was an array I needed to put the Update inside a loop even though I know there is only 1 row. In the upsert I could use either fields from the input object or the queried item depending if I want to change values or not.

At this point I now had a working solution which took me about 2-3 hours to implement and test and I now have migrated my bank transaction processing into Office 365. The Azure upfront cost for the solution was zero and the running costs is about 50 pence each time I process a file.

As you can see this integration solution is viable for a small business. The main expense is manpower to develop the solution. I now have a nice sandboxed integration solution in a resource group in my companies Azure subscription. Its easy to run and monitor/manage. The great thing is these kind of solutions can grow with my business.

If you think about it this could be a real game changer for some small businesses. When you think about B2B business, often its about how smoothly and well integrated two business can be that is the differentiator between success and failure. Typically big organisations are able to automate these B2B processes but now with Azure integration a very small business could be able to implement an integration solution on the cloud which could massively disrupt the status quo of how B2B integration works in their sector. When you consider that those smaller business also don’t have the slow moving processes and people/politics of big business this must create so many opportunities for forward thinking SME organisations.