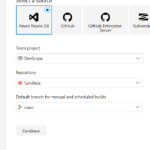 In the previous posts of these series, we’ve talked about how to build and prepare your Logic App for CI/CD. In this last post, I’ll show you how to build your Azure Pipeline, making it prepared for any environment you need.

If you’ve missed the other posts, here are the links for them:

Assuming you already have your repo configured, building the pipeline is fairly simple and quick. I’m not a big fan of using YAML, I find it easier to use the classic editor, having the GUI seems more appealing to me.

Having your repo in place and all the code ready, you need create the Pipeline.

As such, you need to choose the classic editor (or venture yourself in YAML) and select your repo and branch.

The available templates are helpful but if you’re just trying to deploy logic apps, I’d suggest you start with an empty job, because you might have actions that are not necessary and you’ll have to delete them.

The first thing we’re going to do, is configure the pipeline for continuous integration. It doesn’t take much to achieve this, you just need to activate the needed triggers. By default, it will filter to your main branch, but you can change this and trigger for specific projects and branches. This comes in handy when you have multiple projects and you only want to include some in the build.

After enabling the triggers, you’ll need to add the required tasks to get your pipeline going. You might be getting a few secrets in Key vault, if that’s the case, do remember to add the Azure Key Vault task. This will pull either all the secrets or the filtered ones you’ve selected, keeping them in cache for the pipeline execution. This will be used in the Replace Tokens task, which I’ll discuss a bit down the road.

As you can see, it doesn’t take many tasks to have a functional pipeline, ready to deploy your Logic App to the CI environment.

The required tasks are:

The Copy files task is very simple and easy to use. You take the input folder, copy the files you want/need to the target folder. Easy-peasy-lemon-squeezy.

I’d advise you to set the Target Folder as a named one, when you’re building the Release, it will be easier to find what you need if you divide your assets by name.

After copying the files, we will replace the tokens. How does this work?

Simply put, the task collects all the variables in memory and searches for the token pattern in all the target files. Given that we wrote our parameters with the __ … __ token, if we use other tokens in the files, it should not affect them. This is by far, in my opinion, the most helpful task in multi-environment deployment. It takes out the need to have multiple files by environment and having tons of variables.

Having the files copied, tokens replaced, our Logic App is ready for deployment in the CI environment. Now, this is not mandatory, you might not want to deploy your LA from the pipeline, you might want to use the Release instead. This is fine, you just need to move the ARM deployment tasks to the Release, it will not affect the outcome nor the pipeline.

As you can see, after selecting the Azure details (Subscription, RG, Location, etc) it becomes easy to select your LA to deploy. Since we used the LogicApps folder, we just need to reference the JSON files and the task will pick them up from the drop folder and deploy them.

You’re now ready to go on your adventures and build your Logic Apps, get them ready for Continuous Integration and deploy them. I didn’t approached the Release Pipeline because it’s also very simple. You will only require to create your variables, replace your tokens and deploy the ARM templates.

You can fiddle around with gates, automated deployments, pre-deployment approvals and all, but that is a more advanced feature.

Having multiple releases that you want to joint deploy, you can even build Orchestrations (I can hear all the BizTalk bells ringing in our heads). This is not as simple as isolated deployments, because it does involve some orchestration of the parts (well, duhh).

I hope this small series of posts helped you to solve issues and to improve your deployments.

And, as always, Happy coding!