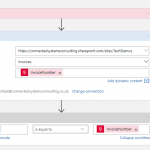 Recently I wrote an article about how I was uploading bank info from Barclays to my Office 365 environment and into a SharePoint list.

In the article I got the scenario working but I mentioned that I didn’t really like the implementation too much and I felt sure there were tidier ways to implement the Logic App. This prompted swapping a few emails with Jeff Holland on the product team at Microsoft and he gave me some cool tips on how best to implement the pattern.

At a high level the actions required are:

In the rest of the article ill talk about some of the tweaks I ended up making.

First off I noticed there was a Get Item action in the list which I hadn’t noticed the other day so I thought id have a look and see if it would do the job for me. I set up my test logic app as below. 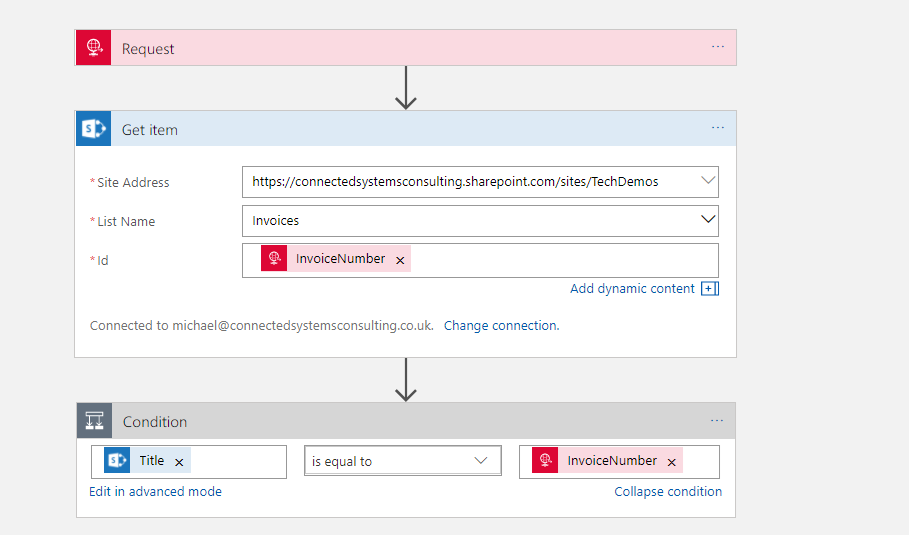 The problem here however is that Get Item requires the ID which appears to resolve to a sort of internal id from SharePoint. In the real world your unlikely to have this id in other systems and you cant set the id when creating a record so I imagine its like an auto number. I quickly found Get Item wasn’t going to help short cut my implementation so it was back to Get Items.

In the picture below you can see how I use Get Items with a filter query to check for a record where the Title is equal to the invoice number. In my implementation I decided to store the unique id for each invoice in the Title field as well as in a custom Invoice Number field. This makes the look up work well and also to be explicit I set the maximum get count property to 1 so I am expecting either an empty array if it’s a new record or an array with 1 element if the record already exists. 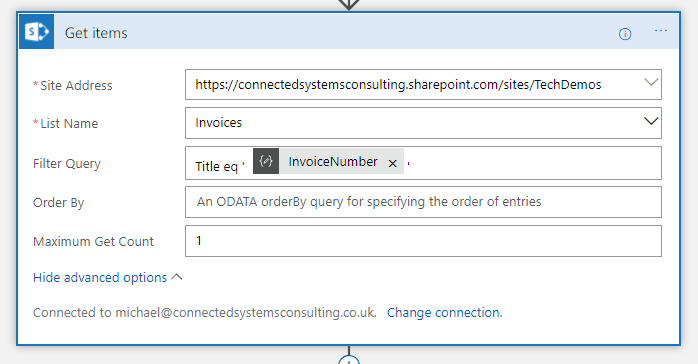 Getting Json for Single SharePoint Item

The next problem after the look up is working with the object from the array. I didn’t really fancy working with complex expressions to reference each property on the item in the array or doing it in an unnecessary loop so my plan was to try and create a reference to the first element in the array using a json schema and the Parse Json action.

To do this I left my Logic App in a position where it just did the look up and I then called it from Postman like in the picture below.

When the Logic App executed I was able to go into the diagnostics of the run and look at the Get Items to see the Json that was returned. (id already manually added 1 record to the SharePoint list so I knew id get 1 back). In the picture below you can see I opened the execution of Get Items. 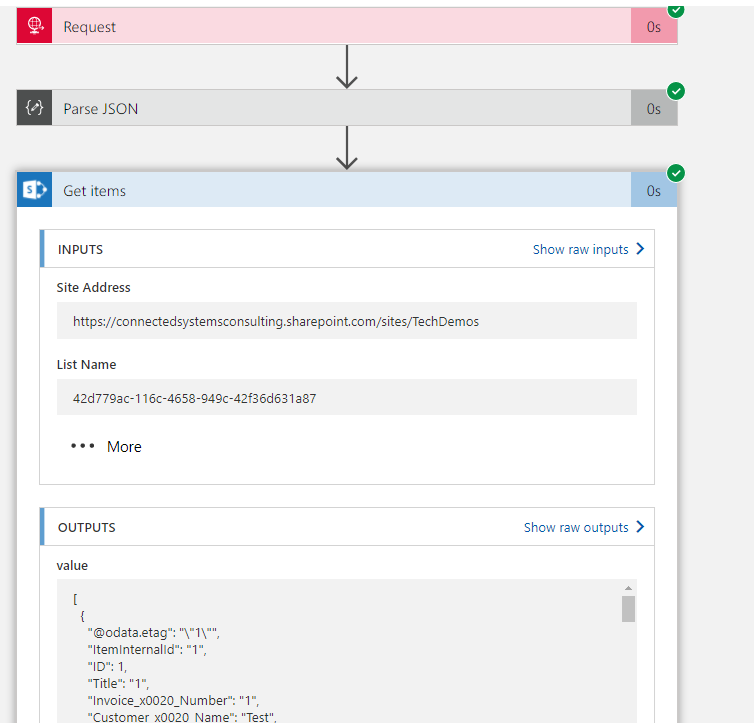 In the outputs section I can see the Json returned from the action and I copied this into notepad. I then removed the square brackets from the start and end which turn the json into an array. What im left with is the json representing the first element in the array. I put this to one side and kept it for later.

Now we wanted to make the look up work properly so lets review what id done so far. First off I had my request action which receives data over http. As a preference I tend to not add a schema to the request unless it’s a Logic App im calling from another Logic App. I prefer to use a Parse Json with a schema as the 2nd step. Ive just felt this decouples it a little and gives me scope to change stuff around a little more in the Logic App without the dependency on Request. A good example of this was once I needed to change the input from Request to Queue and if I had used the schema on Request it would have meant changing the entire logic app.

Anyway so we parse the json and then execute Get Items like we discussed above. 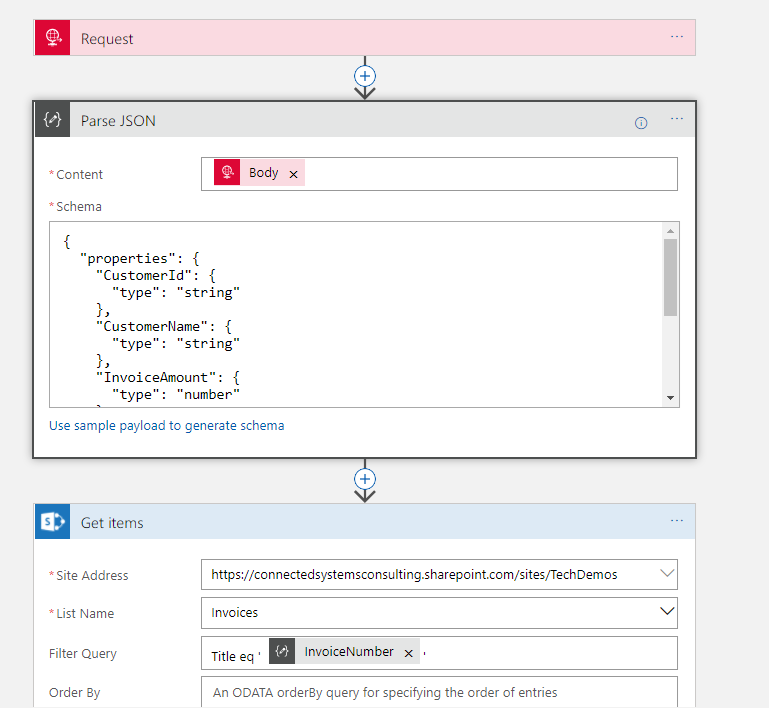 At this point I know im above to execute the Logic App and get a single element array if the invoice exists and an empty array if it doesn’t.

Workout if to Insert of Update

The next step which Jeff gave me some good tips on was how to workout if to do the insert or update. Previously id don’t this weird little counter pattern to count the elements in the array then decide the branch to execute based on that, but Jeff suggested an expression which can check for an empty array.

In the below picture you can see the expression checks the Get Items action and sees if the value is empty.

This has greatly simplified my condition so im happy!

The creation step was really just the same as before. We flow in properties from the inbound json into fiends on the SharePoint list and it gets created. See below pic. 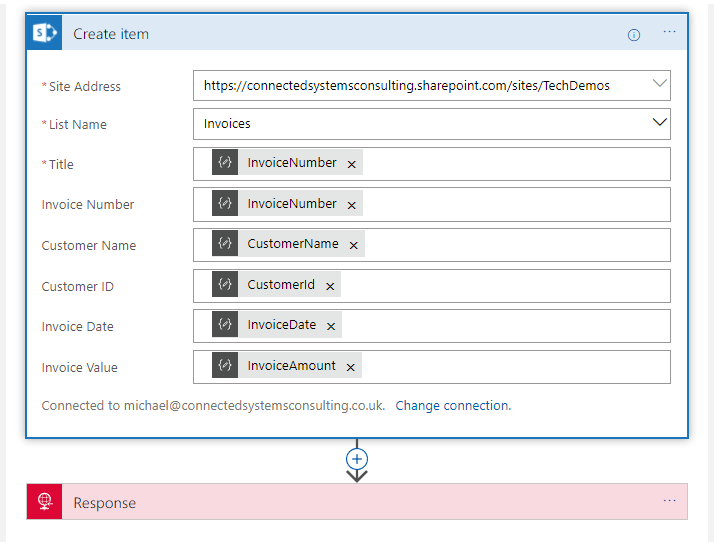 The bit where things got tidier is in the update. Previously I had a loop around the update action meaning it was executed once for every element, even though there should only ever be 1 element. While this works it looked untidy and didn’t make sense in the Logic App. I knew if I looked at it in 6 months time it would be a WTF moment. The problem was that for the update we need some fields from the query response and some fields from the input json to pass to the update action and it was awkward to make them resolve without the loop.

Combining Jeff’s tips and a little item of my own I decided to use the Parse Json action and the json id put to one side earlier which represented a single element in the Get Items response array. I used this json to have a schema for that item from the list and then in the content of the action Jeff suggested I used the @first expression. This basically meant that I could have a new pointer to that first element in the array which means when I used it downstream in the logic app I can reference it with nice parameters instead of repeatedly using the expression.

The below picture shows how I did this.

The next step was to do the Update Item action. At this point I effectively have pointers to two objects in the Logic App created by the Parse Json. The first is the input object and the second is the item queried from SharePoint. I now simply had to map the right properties to the right fields on the update action like in the below picture. 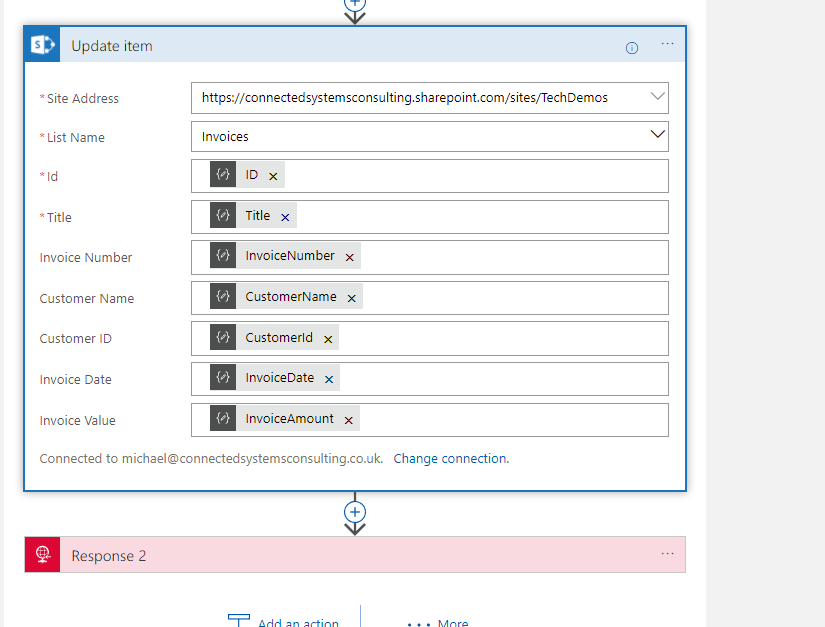 One caveat to note is that although the icons look the same the fields above actually come from 2 different Parse Json instances.

At this point it now meant that when I execute my logic app via Postman I now get the SharePoint list updated and having new items inserted exactly as I wanted. Below is a pic of the list just to show this for completeness. 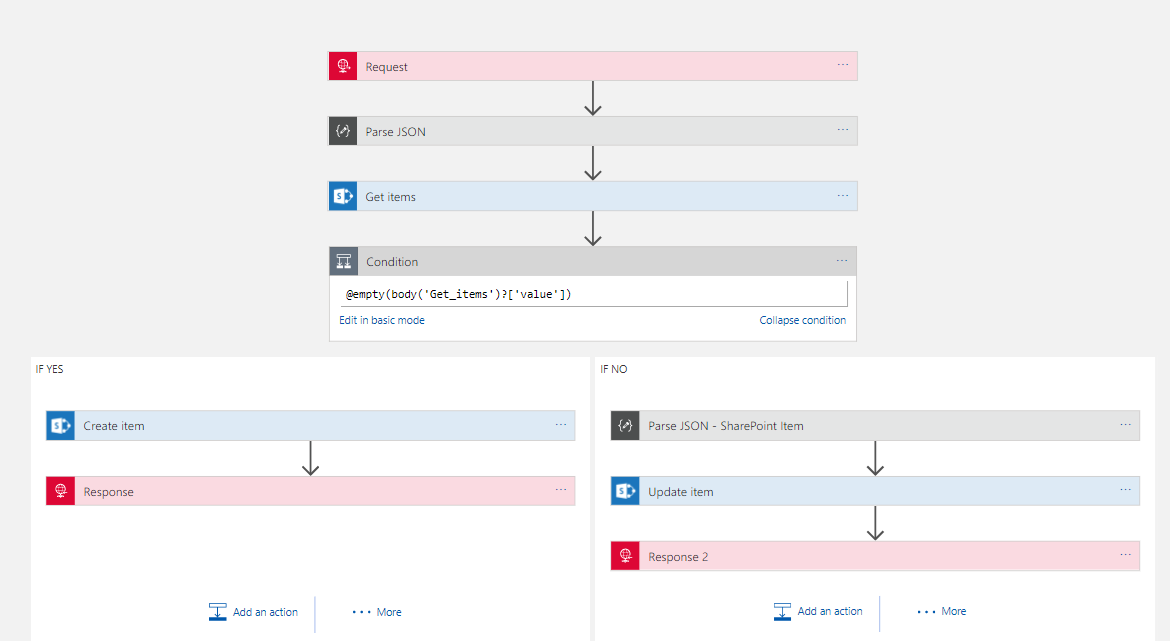 In summary with some help from Jeff I am much happier with how I implemented this upsert functionality. Ive said a few times it will be better when the API connectors support this functionality so the Logic App doesn’t need to care and becomes much simpler, but to be fair most API implementations tend to go for basic CRUD approaches so its common to face this scenario. Hopefully with the write up above that will make it easier for everyone to be able to write a tidier implementation of this pattern. I have a feeling it will be quite reusable for other application scenarios such as CRM which have similar API connectors. Maybe there is even the opportunity for these to become Logic App templates.