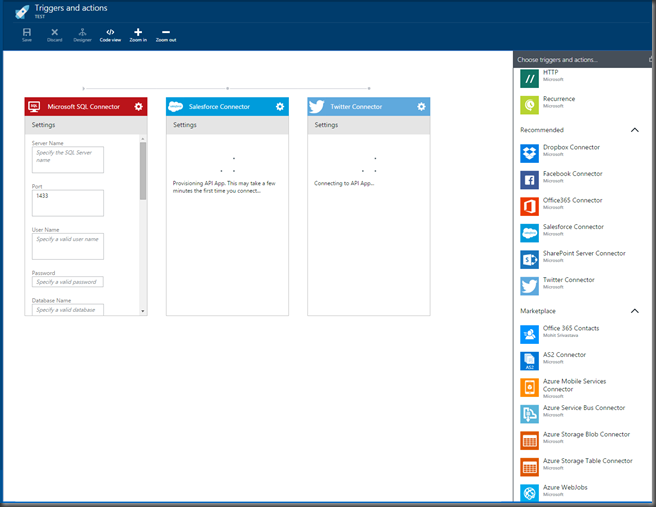 If you have been keeping up with cloud based platforms, I am sure that you have realized it has become a very competitive landscape.  Some cloud platforms focus on websites ,infrastructure, and database platforms, while others focus on integration or API management.  We even have Mobile backend as a service platforms that we can choose from. While organizations can choose to cherry pick from each of these different platforms, they can also get first class capabilities, that encompasses all of these domains, from Microsoft’s Azure platform.

At the Integrate 2014 conference in December, 2014 Microsoft gave us a preview of its next generation ’App’ platform.  At the time, the term Microservice was being used to describe the “architecture style” of the applications that can be built using this new platform.  While the Microservice name did not make its way into the product, the concepts that were discussed at that event have not changed. The day has finally arrived when this Next Generation has emerged in the form of a Preview Service.  The name of this service is called Azure App Service.

For Microsoft this is a PLATFORM PLAY.  No longer do we see disparate product lines in the areas of Integration, API Management, Web Development, Mobility and Workflow.  In addition to these characteristics, we also have the rest of Azure that we can leverage including Service Bus, Analytic Engines(both Microsoft and 3rd party), Databases and Infrastructure.  When you think of all of these different capabilities, using a common platform, common authentication schemes, common tooling, common billing and a global reach for providing these services, Azure is more than just compelling.
Using the Azure App Service we can now create the following types of Apps:

What are some use cases of an API App?
An example of an API app may be a SalesForce connector.  Consider a scenario where you have a mobile application that requires data from SalesForce.  There may be good reasons to place this request on a messaging bus (and don’t worry you still can!) but there may also be good reasons to plug into a connector directly.  Consider a low latency situation where you want to by-pass a monolithic ESB in favor of something lighter.  You could use an API Client library that allows you to consume this SalesForce connector without having a complicated auth scenario.   If you have ever looked at a Mobile Service client, you will feel very comfortable working with API App Client.  When I saw an insider’s demo of this functionality, I was really happy to see the similarities to a paradigm that I am used to.
Similarly, what if you have built an ASP.Net Web API and you want to consume it from a Web Application.  While it can be fun constructing a json message using a String Builder (not really), wouldn’t it be nice to leverage a strongly typed API Client instead?  Yes it would!  So once again much like Azure Mobile Services client we can use something similar in the form of an API App Client.
Another aspect of API apps is that Swagger is a first class citizen of Azure App Service.  We have the ability to generate contracts between the client and API Server which aids in having strongly typed client libraries.

A point worth making is that when building or consuming API apps you are in Visual Studio and there is an accompanying Visual Studio SDK to leverage in order to build or call these API Apps.
Another interesting aspect of this platform is the Cross Platform capabilities.  You can choose to build your APIs in the language of your choice (Java, PHP, Node.js, Python + .Net) and expose them as an HTTP endpoint which you can then consume from other applications.

What are some use cases of a Logic App?
A Logic App is really a workflow application.  Personally, I am not a big fan of Logic App name but it is preview so maybe it will change.  One of the first questions that comes to mind is this workflow based upon Windows Workflow and the answer is no.  Perhaps this is why Microsoft stayed away from using “Workflow App”.

What is interesting about a Logic App is that this is a Workflow that you would construct in a Web Browser without writing code. While some people have made some references to IFTTT (If This Then That), Microsoft feels that this is a much more robust, Enterprise grade, platform.
Below is a screenshot of a “work in progress” Logic App. In this example we can retrieve records from SQL Server, create contacts in Salesforce and then send a welcome tweet all without writing a line of code.

In order to add a connector we simply drag and drop it onto our Logic App canvas and then configure it.

A question you may be asking is well if I am composing a workflow in the cloud, how can I add some version control around this?  Behind the scenes, the Logic App Workflow itself is based upon JSON and we have the ability to save/export this JSON data and subsequently store in TFS/GIT etc.

So where does BizTalk(Integration) fit into this platform?
The BizTalk brand continues to exist both on-premise in its BizTalk Server sku but also in the form of an API App or what is being called a BizTalk API App.  Since building integration applications requires more than just connectivity we can expect to still perform valuable functions such as:

We can drag these BizTalk API Apps onto our Logic App Canvas much like any other connector. I have highlighted a few of them.

It is important to remember that this is a Platform play.  BizTalk, within Azure, now participates in the broader platform.  You can think of the platform as a series of building blocks.  As a developer you now have the ability to select the different building blocks that you need in order to build a compelling solution.  As an example of the breadth of this platform, you do not see Workflow currently listed in the BizTalk section, but that doesn’t mean that the capability doesn’t exist.  This is a capability that is part of Logic Apps. As a BizTalk person we need to start thinking more about Azure and that is a good thing due to the vast amount of capabilities that exist.  Let’s be honest, in the past BizTalk seemed to be a distant cousin of Azure, but it clearly has a place at the family table in this new paradigm.

This is good news for developers.  In the past BizTalk has been accused of being too bulky of a platform with too much ’lift’ required for developers to be productive.  With this new platform Microsoft is democratizing integration and bringing the toolset that BizTalk Developers are used to using to a broader audience.  This will enable more use cases that involve BizTalk and as a result we will see more integrated Web and Mobile applications leveraging BizTalk capabilities.
In addition to these core BizTalk API capabilities we will also see Connectors in the form of SaaS Connectors, Premium Connectors and Protocol Connectors.
SaaS Connectors

We will also see Premium Connectors in the form of:

and Protocol Connectors in the form of:

Conclusion
I have heard many people refer to this release as the “Back to BizTalk 2004” release.  What I mean by this is that back in 2004, Microsoft released BizTalk which at the time was the most modern Integration platform available.  While we are still in preview and there is a lot to learn, there are a lot of expectations about this release.  The current version of BizTalk is extremely robust, but it could benefit by having some very modern capabilities and being able to efficiently run in the cloud.  What we are seeing today are the initial steps of BizTalk once again becoming the most modern Integration platform available.

One particular pattern that I am going to be interested in exploring is the hybrid connectivity scenarios that exist.  As you may have noticed above, we do have an Azure Service Bus Connector.  We also have an Azure Service Bus Adapter in BizTalk Server.  So suppose you have an async messaging requirement that involves on-premises systems but you want to tap into one of these cloud based systems.  Well now you can leverage the Service Bus to ’bridge’ your on-prem envionment with the Azure App Platform Service where we can then leverage one of these fancy new SaaS connectors to talk to SaaS system like Box, Marketo, Dropbox etc without having to do any custom work in BizTalk Server.  It allows you to take advantage of robust on-premise messaging while tapping into modern, SaaS base connectivity and allows you to migrate these workflows to the cloud at a cadence that you are comfortable with and that make business sense.

It is also worth mentioning that I am just scratching the surface on these new capabilities and we are still in Preview mode.  I think being a Microsoft platform developer is going to get even more exciting than it already is.  I think developers will be able to build some compelling, mobile, connected apps using a vast array of building blocks.
Expect much more to come on this blog regarding this release.