How we introduced DevOps during the release of BizTalk360 v8.8 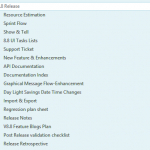 We are excited to launch version 8.8 of BizTalk360, where we have added improvements to existing features and resolved quite a few numbers of outstanding support tickets which were raised by our customers.

As others are excited, I’m even little bit more excited about the BizTalk360 new version release. The reason being, in this release every person in the team has transformed and performed as a DevOps in BizTalk360. Everyone on the team provided their contribution in the form of developing a new feature, enhancing an existing feature, testing, documenting, writing blogs and so on.

2017 was a special year for BizTalk360 product support, we had learned many new things. We started this year with a lot of training. We all product support engineers underwent product training with the help of the respective developers who developed the product features and with the QA who tested.

Being a support engineer for a long time, I have been involved in the development activity. I take this opportunity to thank everyone in and out of BizTalk360 for this wonderful opportunity.

The Development Process of v8.8

This time we have changed our development process from Agile to Kanban as well. As the process changed, we are in a situation to monitor each task what we do.

In the version 8.7, few of us evolved as a DevOps and worked along with the release. With the hands-on experience in the version 8.7, we planned our 8.8 from the requirement of the features to the post-release validation.

Here is the task list what we followed in 8.8. 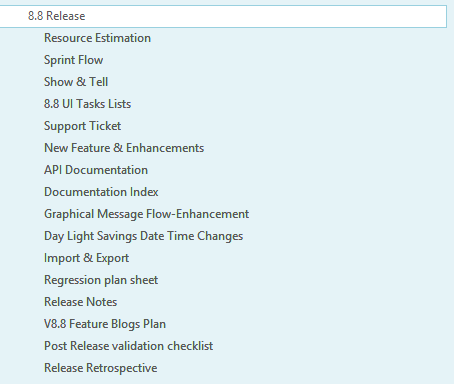 We planned for 2 months duration with 4 sprints, each sprint holding 2 weeks of duration in this release. As we have our own priority (like Support, QA, Dev involved) based on our availability, the tasks were allocated in each sprint.

During the completion of a sprint and to start another sprint, the feature allocated must be in the deliverable state.

The tasks will be assigned to the individuals based on the nature of their jobs. The assigned tasks must be completed before sprint completion. When I say fixing or enhancement of the feature for the sprint, it doesn’t mean just development. It includes:

If it’s a feature enhancement, we will change the existing documentation according to the feature enhancement. For a new feature, we created a new article in our support portal (https://assist.biztalk360.com). Also, we prepared a rough Release Notes article.

Once we complete a feature enhancement or a new feature document, we will send it to one of the team members for internal review.  After review, we will pass it on to the Documentation team to add or make changes to the support document.

Here is a part of the list of the documentation index what we had done in 8.8.

The process does not end once the product is ready for release. We do have few activities for the post-release validations to make the release complete and we were also involved in these activities. The activities include the tasks needed to be done before the product is announced to the public.

Meetings are always helpful for the team coordination and understand the activities and make sure everyone on the team is on the same page. Daily stand-up is one another way to update our daily task, to reveal our technical challenges what we had faced on the day before, the tasks what we have worked and what we are going to work on the day.

If there are any challenges faced, any one of the people from the team or from other teams will help you out to overcome the problem. Also, we get feedback and suggestion on the tasks. If we have any technical dependencies we will convey in the meeting so that within a team all will get to know who is working on what. It helped us to complete the task on time.

Along with the task update, we will also verify the development progress, testing, documentation of the feature, support and mock release notes.

As the name implies, we show our developed feature and tell the progress of our development activity to the team. This is something different from the Daily stand-up as we would showcase the tasks performed for the entire week and demo the feature developed to have the feedback from the management.

Show and tell is conducted every Monday afternoon. We will showcase what we developed during the meeting to our CEO along with the external team members to get their feedback and suggestion. Based on the suggestion we will make changes.

Challenges what we faced

It is not that much easy to transform from a QA and Technical Support engineer to DevOps even though we handle technical things.

From our side, at the very beginning stage, we faced a problem with the priority and time consumption. At a very earlier stage, I was not able to focus completely on the development since we are handling the support. We receive support cases and our priority is to solve the tickets as soon as possible. We could overcome this by the practice in various sprints.

“Success is where preparation and opportunity meet”

From my personal point of view, since we handled from the requirement to post-release validation I would like to name it as contribute360. I personally take this opportunity once again to thank everyone in and out of BizTalk360 for this wonderful opportunity and believing in us. We are looking forward to much more opportunity.

>>Which feature would you like to see coming in BizTalk360 in upcoming releases? <<

Now we would like to request you, our customers, to please take the time to fill this questionnaire. This helps us to prioritize the next upcoming feature tasks and will let us know what your main pain points are. This way we can further improve the product and make it a usable as possible for you.

Sivaramakrishnan is our Support Engineer with quite a few certifications under his belt. He has been instrumental in handling the customer support area. He believes Travelling makes happy of anyone. View all posts by Sivaramakrishnan Arumugam