Host Integration Server 2016: Invalid Assembly. Assembly does not contain any TI Objects that inherit from interface 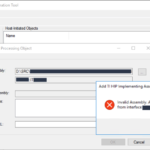 While going through my adventure on a BizTalk Server + Host Integration Server (HIS) project and mainframe connectivity, I’m trying to migrate an old HIS2006 solution to BTS2016 + HIS2016. Just ten years of evolution, I notice that:

I have to say I’m lucky to have good friends, and because of that, I have been learning a lot with my dear friend Steve Melan, that is the best expert I know regarding HIS.

The last strange (all of them are strange) issue I encountered while trying to Add Host-Initiated Processing (HIP) Object on my HIP configuration by using the Transaction Integration (TI) Configuration Tool was:

Invalid Assembly. Assembly does not contain any TI Objects that inherit from interface: namespace.interface

Or in other cases:

Invalid Assembly. Unable to load one or more of the requested types. Retrieve the LoaderExceptions property for more information.

My problem was that this interface implementation was also a very old project, compiled in .NET 2.0. For some reason, I yet not completely understood, and despite successfully migrating them to .NET4.6.1, I couldn’t make it fully compatible with the HIP, and I always got these two issues above.

The resolution was, in fact, quite simple. Basically, I create a new C# class library project from scratch and copy-paste all the existing code to the new one, recreating the old one manually.

Surprise… everything work perfectly! And then, I could create the HIP object.

An example of a Host Application .Net Server Definition interface implementation is something like this: