Great Experience at INTEGRATE 2017 in London!

Last week I had the privilege not only of attending the INTEGRATE 2017 conference in London, but presenting as well. A huge thanks to Saravana Kumar and BizTalk360 for inviting me as a speaker – what a tremendous honour and thrill to stand in front of nearly 400 integration enthusiasts from around the world and talk about Hybrid Connectivity! Also, a big thanks to Mexia for generously funding my trip.

With 380+ attendees from 52 countries around the globe, this is by far the biggest Microsoft integration event of the year. Of those 380, only four of us that I know of came from APAC: fellow MVP speakers Martin Abbott from Perth and Wagner Silveira from Auckland NZ, as well as Cameron Shackell from Brisbane who manned his ActiveADAPTER sponsor stand. Wagner would have to take the prize for the furthest travelled with his 30+ hour journey!

I’ve already published one blog post summarising my take on the messages delivered by Microsoft (which accounted for half of the sessions at the event). This will soon be followed by a similar post with highlights of the MVP community presentations, which in addition to BizTalk Server, Logic Apps, and other traditional integration topics also spanned into the new areas of Bots, IoT and PowerApps. 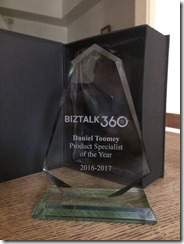 Aside from the main event, Saravana and his team also arranged for a few social events as well, including networking drinks after the first day, a dinner at Nando’s for the speakers, and another social evening for the BizTalk360 partners. They also presented each of the BizTalk360 product specialists with a beautiful award – an unexpected treat!

You have to hand it to Saravana and his team – everything went like clockwork, even keeping the speakers on schedule. And I thought it was a really nice touch that each speaker was introduced by a BizTalk360 team member. Not only did it make the speakers feel special, but it provided an opportunity to highlight the people behind the scenes who not only work to make BizTalk360 a great product but also ensure events like these come off. I hope all of them had a good rest this week!

As with all of these events, one of the things I treasure the most is the opportunity to catch up with my friends from around the globe who share my passion for integration, as well as meeting new friends. In my talk, I commented about how strong our community is, and that we not only integrate as professionals but integrate well as people too.

Arriving a day and a half before the three day event, I had hoped to conquer most of the jet-lag early on. But alas, the proximity to the solstice in a country so far North meant the sun didn’t set until past 10:30pm while rising just before 4:30am – which is the time I would involuntarily wake up each day no matter how late I stayed up the night before! Still, adrenalin kept me going and the engaging content kept me awake for every session.

And no matter what.., there was always time for a beer or two!

I look forward to the next time I get to meet up with my integration friends! If you missed the event in London, you’ll have a second chance at INTEGRATE 2017 USA which will be held in Redmond on October 25-27. And of course, if you keep your eyes on the website, the videos and slides should be published soon.