Getting BizTalk360 to run a BHM Monitoring profile 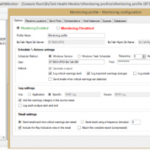 Continuing in our series of blogs, Customer feedback getting Answered, where we will be trying to address and answer some of the issues, where a workaround is possible, rather than awaiting a new feature release.

Today we will address an issue relating to BizTalk Health Monitor (BHM) integration in BizTalk360.

One of our existing customers posted the following feedback request: http://feedback.biztalk360.com/forums/331695-biztalk360-operations/suggestions/20567692-bhm-bt360-profile-use-monitoring-profile
He wanted to specify or change the BHM Monitoring Profile that BizTalk360 should use.

The BizTalk snap-in, “BizTalk Health Monitor” (aka “BHM”), has so been created to help you easily monitor the health of your BizTalk environment. BHM is based on the same engine as MBV. This snap-in can be added to the existing BizTalk Administration Console or can be run individually in its own MMC window.

A Monitoring profile is in fact a BHM profile, but configured specifically to execute a short selection of critical BHM queries/rules and custom rules checking the state of given ports, orchestrations, host instances, queues and BizTalk databases sizes and raise critical warnings detected in a log.

The BizTalk360 product integrates with BHM, but currently has the limitation that you cannot specify a profile, that is stored in BHM, which should be scheduled and run at those specific times.

If you wish for BizTalk360 to run a certain BHM profile – Follow the below workaround. 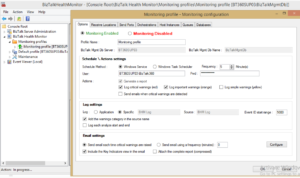 Hope you found this workaround helpful.

Thanks to our customer Joost for his help in the investigation.

Rochelle Saldanha is currently working in the Customer Support & Client Relationship Teams at BizTalk360. She loves travelling and watching movies. View all posts by Rochelle Saldanha