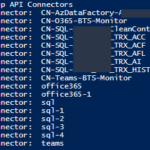 Developing solutions on Azure is sometimes an effortless operation. Administrate all your Azure resources that may be a different story. And this PowerShell script focuses on simplifying one of these processes.

What is the importance of this script? Over time, our Logic Apps can change to fit new requirements or fix some issues that can occur. And we can quickly end up with unused Azure API Connections. In addition, it is not easy to work out which API Connections are being used by our Logic Apps directly thru the Azure Portal! Neither to see if a specific API connector is orphaned.

This script was initially created by Mike Stephenson, which I took as a reference and improved or modified according to what I thought fit better to this task:

You can download Find Orphaned API Connectors from GitHub here: