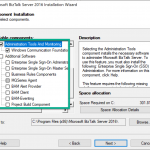 From time to time, in conversations we have with our prospects and customers, the question pops up if additional licenses needed for BizTalk components on separate servers. You can install BizTalk360 on a BizTalk server, but also on a separate server on which no BizTalk processing takes place. Normally, we recommend to install BizTalk360 on a separate server. This has advantages like not using resources which BizTalk can use for processing and (equally important) to prevent not able to access BizTalk360 when the BizTalk server goes down.
For BizTalk360 to work, it needs the so-called BizTalk Server Administration Tools. You need to install these tools on the server which will run BizTalk360, as they contain the APIs which BizTalk360 uses to access BizTalk Server.
These APIs, being used by third party products like BizTalk360, is not the only reason why an organisation might want to install these components. These APIs are part of a set of components and tools, you might want to install on a separate server. In the BizTalk Server installer, this set can be found under the category Administration Tools and Monitoring and Additional software, as you can seen in below screenshot. 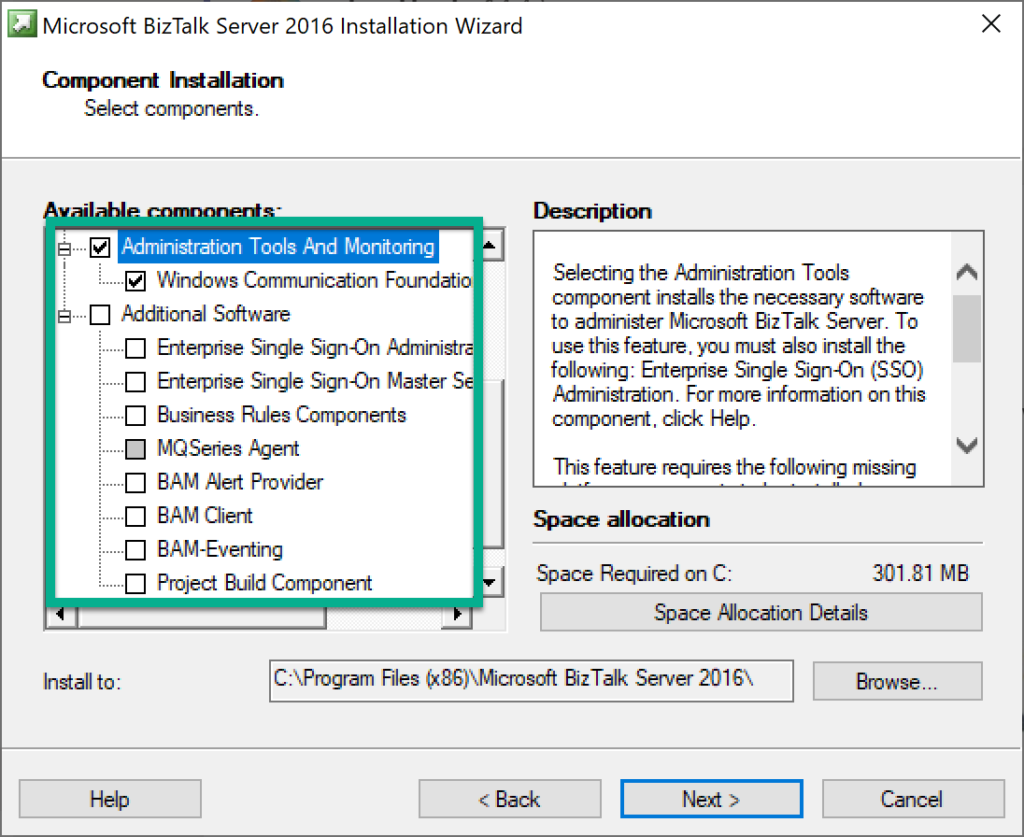 The Administration Tools and Monitoring and Additional software contain the following components and tools:

Why would you need these components/tools

So, given the list with available components/tools, an organisation could have several reasons to install them, depending on the purpose of the component. You could think of BizTalk users who might want to achieve, for example, the following:
Hence, it makes sense to be sure whether (or not) you require additional BizTalk Server licenses for the server(s) on which such components will be installed.

The hunt for information

We have been trying to find that information somewhere on the internet. However, as Microsoft is the supplier of the product, we searched for a formal statement from their side. Therefore, we checked web sites like the BizTalk Server product web site and the BizTalk Server Core Documentation. However, we were not able to find that information.
As we want to give our customers clarity about this matter, we decided to reach out to the Product Group directly. After a couple of emails, the Product Group informed us where to find the information we were looking for. See below, the email we received from the Product Group. 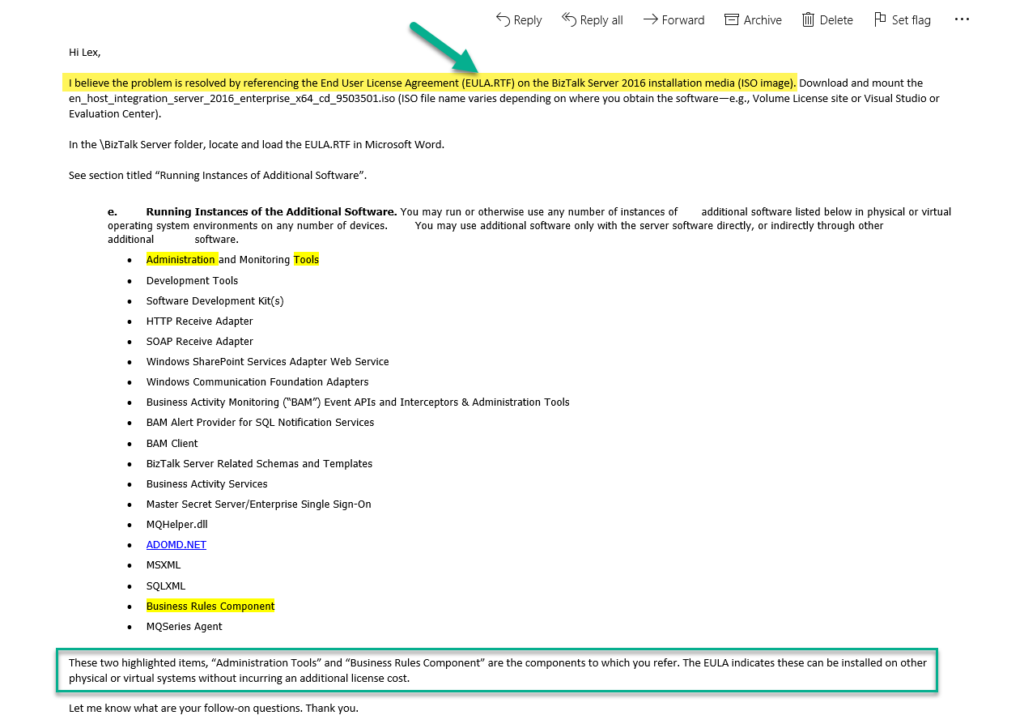 The email from the Product Group mentions that:

These two highlighted items, “Administration Tools” and “Business Rules Component” are the components to which you refer. The EULA indicates these can be installed on other physical or virtual systems without incurring an additional license cost.

For people who are working with BizTalk Server for some time, it is no surprise that no additional license costs are involved in installing these tools on separate machines. Main reason for this, is that by only installing these tools, the machines are not a part of the BizTalk Group and no additional BizTalk processing is taking place (like receiving/sending messages or processing orchestrations).
However, it has always been a bit frustrating that we could not back this by a statement from Microsoft. So, we are glad that we can now refer to an official resource which gives clarity about this matter.

How to find the End User License Agreement(EULA)

Now we know where to find that information, let’s have a look on how to find the EULA, including the section where the clarity is given.

1. Download and mount the en_host_integration_server_2016_enterprise_x64_cd_9503501.iso (ISO file name varies depending on where you obtain the software—e.g., Volume License site or Visual Studio or Evaluation Center)

2. Start a Windows Explorer and navigate to the BizTalk Server folder 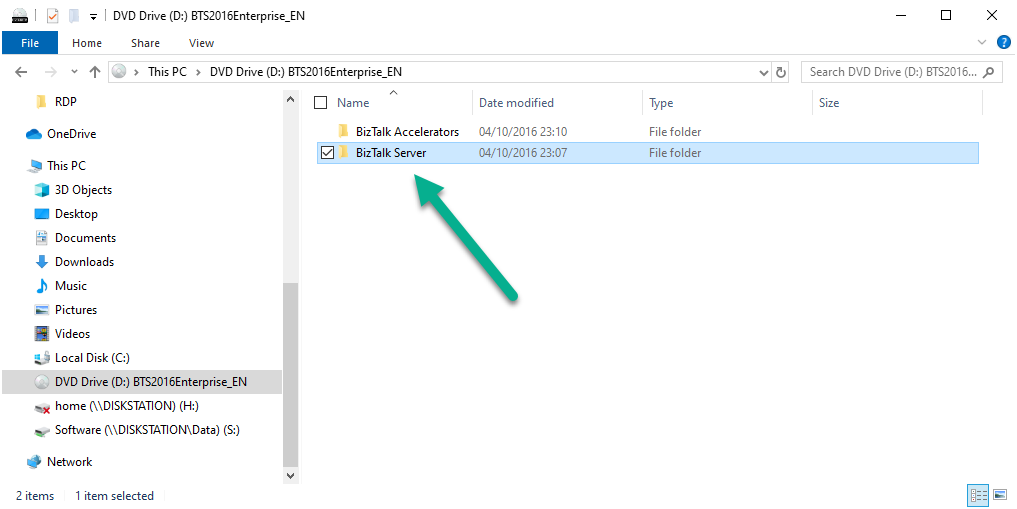 3. Locate and load the EULA.RTF in Microsoft Word 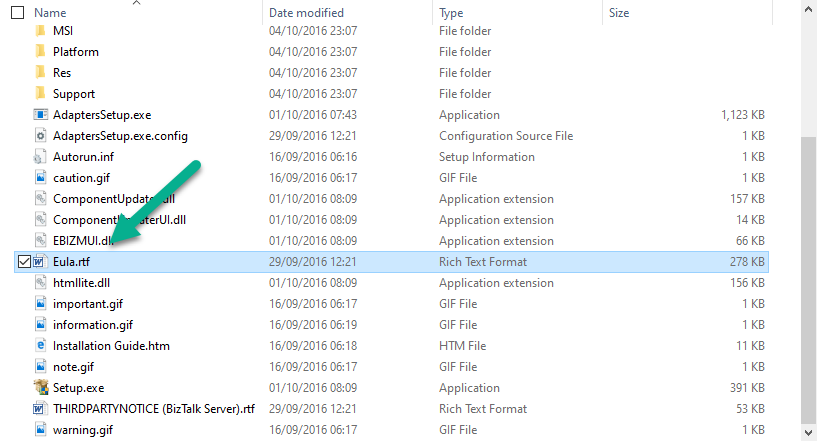 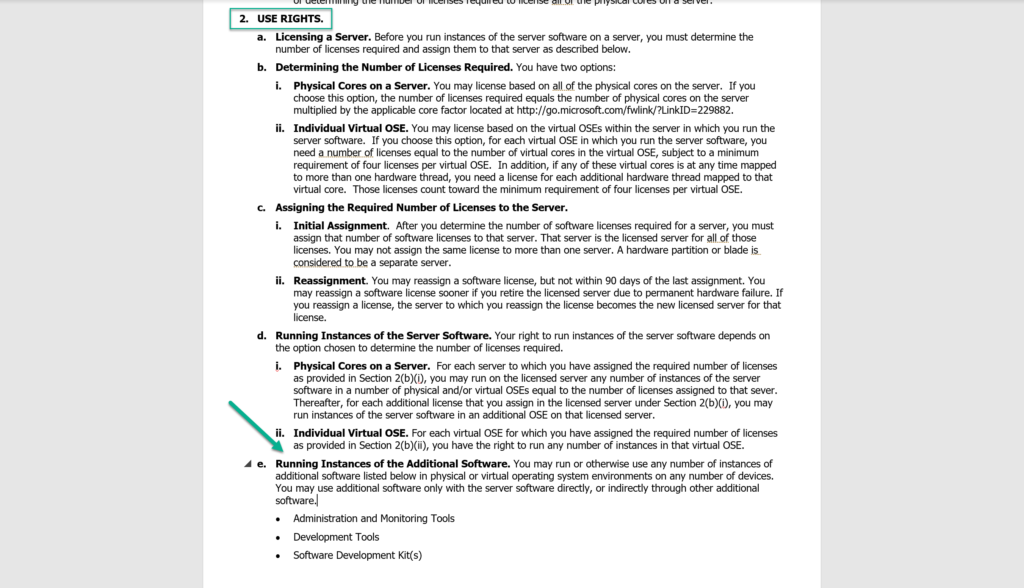 There you have it, written in black on white! No license costs will be incurred for installing the Administration Tools etc. on a separate server!

We, as a company, are glad to be able to give clarity to our customers, prospects and partners about the matter that no additional license costs will be incurred in case of installing the Administration Tools etc. at separate servers. However, also organisations who are using BizTalk Server, resellers of Microsoft products and consultancy companies who advice their customers about BizTalk Server, are now able to safely say that no additional license costs are involved in case of installing these components and tools as they are backed by the EULA from Microsoft.
From this place, we also like to thank the BizTalk Server Product Group to help in giving the clarity.

The post Do you need additional BizTalk Server Licenses for installing BizTalk components on separate servers appeared first on BizTalk360.