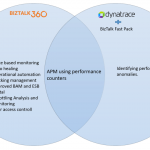 BizTalk360 and Dynatrace in short

BizTalk360 is a comprehensive product for operations, monitoring and application performance management (APM) of BizTalk Server environments. Unlike other APM products, BizTalk360 is an agent less, non-intrusive software which requires zero configuration on BizTalk servers. This makes it an easy to use and operations-friendly tool. Customers have a lot of influence in the roadmap and the vendor is very receptive to feedback via http://feedback.biztalk360.com. Furthermore, Support is very responsive. This means the product is always up to date to support the latest releases of BizTalk Server.

BizTalk360 is a market leader in BizTalk Server space, has a large customer base and healthy partner ecosystem. The company understands that supporting BizTalk Server applications for business continuity and efficient operations requires a tool which can go beyond being a traditional application performance management tool. Therefore, the product provides BizTalk specific capabilities such as managing BizTalk Applications, proactive monitoring of throttling conditions, role-based user access policies, audit logs, data monitoring etc. In some instances, BizTalk360 has helped customers to meet SOX compliance.

DynaTrace, on the other hand, is a typical Application Performance Management tool with generic capabilities to monitor operating systems, services, network protocols, system metrics, network infrastructure, services, applications etc. There is no out of the box DynaTrace plugin or agent for BizTalk Server. Either the customer needs to create one of their own or use an open source plugin Fastpack. This plugin must be installed on all the BizTalk Servers and some configuration changes must be made to the BizTalk host instance’s configuration file (btsntsvc.exe.config). With an agent it brings the ability to analyse and monitor the performance counters for BizTalk host instances, databases, orchestrations, pipelines etc. The Fastpack plugin seems to have been updated a couple of years back and might not be up to date with the latest BizTalk releases; this is a typical challenge with using open source plugins from individual contributors.

In this section we will compare the 2 products, BizTalk360 and DynaTrace, for capabilities in achieving BizTalk Server monitoring requirements.

Getting a proactive alarm to warn before a problem occurs

In the BizTalk environment problems can occur in the following situations:

BizTalk360 has features to monitor state-based artefacts, which ensures that all BizTalk application artefacts such as receive locations and orchestrations are up and running and generate notifications in case of aberrations. State based monitoring also ensures that essential SQL jobs and Windows services are running as expected. Features like suspended queue monitoring and throttling monitoring ensure that the BizTalk Server is running in a healthy state.

DynaTrace has no out-of-the box support for BizTalk Server. The Open Source plug-in does not have features such as state-based monitoring, throttling monitoring and suspended queue monitoring. However, it does have monitoring capabilities based on some BizTalk and SQL performance counters. In conclusion, it lags behind BizTalk360 in proactively warning of potential issues.

In some situations, issues do occur and the operations team needs easy to use tooling to correct the faults. For example, if receive locations get disabled, they will have to be re-enabled. If messages get suspended, they will have to be terminated or resumed. If we have a software which auto-corrects these faults and automates the operational tasks then it is a big bonus as it brings the down time to its minimum levels and ensures operational efficiency.

BizTalk360 has a powerful feature called Auto Healing, which allows the users to define the expected state of an artefact and in case there is an aberration, arestores the expected state without any human intervention. With another feature Operational Automation, the day to day monotonous tasks such as resuming/terminating suspended messages can be automated.

DynaTrace on the other hand has no operational capabilities. Auto-healing and Operational Automation are not features you can expect from a typical Application Performance Management system. Hence, DynaTrace will not be the right tool to be used for BizTalk related problem solving actions.

BizTalk Server has a very limited number of user groups. The BizTalk Administrators group has the highest level of privileges and the BizTalk Application Operators group has highly restricted access. There are no access levels to give intermediate level access to BizTalk applications and artefacts. Many customers have ended up providing their users with the unrestricted access to production boxes. It is typical of organisations to provide all the users the access to production servers for business continuity.

One of the widely used features of BizTalk360 is Granular User Access Control. With this feature, user access can be controlled at a very granular level. Users do not need to RDP to production boxes to support BizTalk applications. BizTalk360’s web portal allows them access to all the features without the need for them to log on to production boxes unless they are doing deployments.

Again, access control is the feature which can be expected from an Application Performance Management tool. Hence, DynaTrace clearly has no capabilities which to help to restrict access to BizTalk Servers.

One tool for operations, monitoring and analytics

If a support professional needs to use multiple tools daily, operational efficiency takes a big hit due to all the context switching he must do between the tools. This is one of the main challenges in supporting BizTalk Server applications. Every operations team needs a single tool to perform operations, monitoring and analytics.

BizTalk360 brings all the capabilities of operations, monitoring and analytics into a single web portal. Apart from this, it allows the users to access BAM data, ESB data, EDI reports from the same web portal. This means users do not have to switch to different tools.

DynaTrace being an Application Performance tool, does have the ability to monitor performance counters and detect some anomalies. However, the user will be required to switch to different tools such as admin console, event log, ESB portal, BAM portal etc. to perform various other tasks. In a true sense, it adds another tool to the list.

BizTalk360 has a feature called Tracking Manager, which brings great control to manage tracking options at various artefacts. This helps customers to ensure they are following the tracking standards set at the organisation. BizTalk360 also has a feature called Graphical Flow, which is an analytics feature providing a visualisation of message flow across various artefacts such as receive ports, orchestrations and send ports. Enabling pipeline tracking is a minimum requirement for the feature. Not many of our customers use it due to performance requirements. This is the only feature which is dependent on tracking. Most of the earlier discussed features of BizTalk360 are not dependent on the tracking.

DynaTrace, like BizTalk360, will not be able to provide analytics related to ports and orchestrations if the tracking is not enabled. It surely is not a tracking management tool either.

Comparing the capabilities of BizTalk360 and Dynatrace against the day-to-day requirements necessary to work with BizTalk Server, BizTalk360 comes out as a clear winner. Dynatrace is a generic APM tool and will not match most of the capabilities of BizTalk360. The features such as State-Based Monitoring, Auto Healing, Operational Automation, Throttling Monitoring etc. are essential to bring the operational efficiency and ensure the health of BizTalk environments and applications. 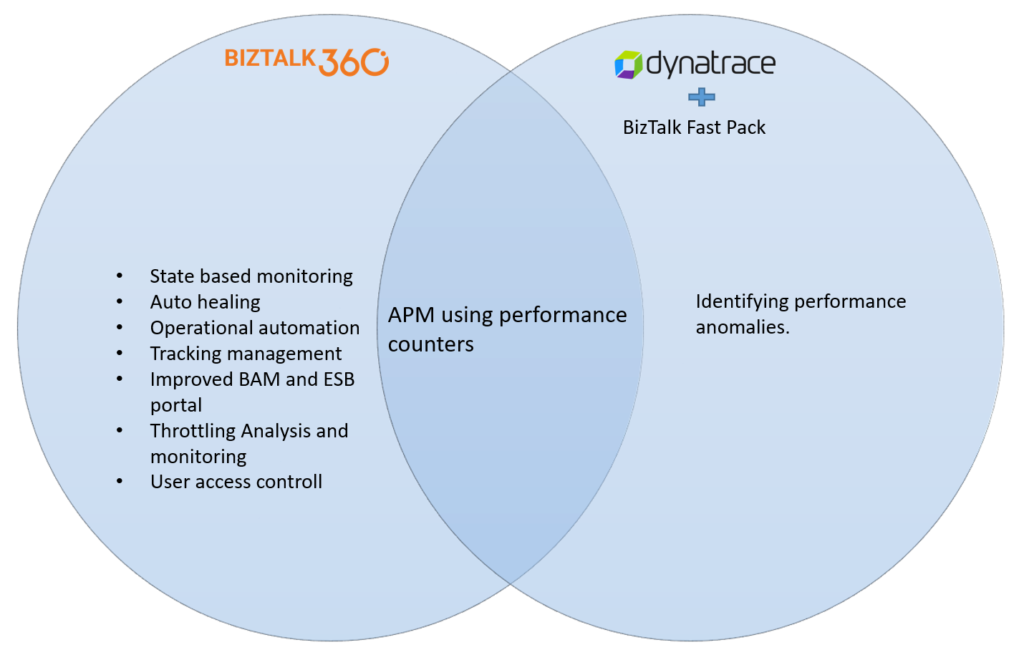 Why not give BizTalk360 a try! A trial version of BizTalk360 can be requested here.