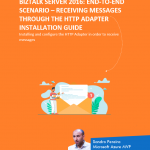 And you thought there was no Santa Claus? I couldn’t
take this opportunity and this time of year to once again give back to the
community what they have also done for me: grow up together in several aspects.

So, this year with the fantastic help as always of BizTalk360 team, my partner in many adventures during these years and the sponsor of my blog, we end up writing, revising and editing in a short period (5 days) another BizTalk Server whitepaper to be completed before Christmas: BizTalk Server 2016: End-to-end scenario – Receiving Messages through the HTTP Adapter whitepaper.

The role of an adapter is to enable communications
between BizTalk Server and external systems and trading partners. Users
configure adapters by creating send ports and receive locations that define the
properties for given instances of the adapter. Most adapters support both send
and receive operations, whereas other adapters support communication in only
one direction.

The HTTP Adapter is one of the adapters that support
two-way communications, but unlike other adapters, this adapter has two
characteristics that define it:

In this whitepaper, we will describe the step-by-step process of installing and configuring the HTTP Adapter in order to receive messages.

Some of you may think that the HTTP adapter is deprecated,
but that is not true. The only adapters that were deprecated were the old SAP
adapter (removed) and the SOAP and SQL adapter (that still are present in the
Administration Console). The HTTP adapter is a classic but is not deprecated
and is still very used today.

The idea for
this whitepaper was partly out of a real need and at a customer request.
Because it is a strange adapter with a peculiar configuration unlike any other
adapter in BizTalk Server, when I was giving a training course, the attendees
struggle to understand and put it working correctly. By coincidence, a week
later, I needed to put this adapter working at another client.  As a result of that request and that client’s
need, I end up creating this step-by-step guide on how to install and configure
the HTTP adapter to receive messages through HTTP requests. I think this is a
good whitepaper about a classic adapter in BizTalk Server.

You can also find, download and enjoy several other
free whitepapers of my own here: