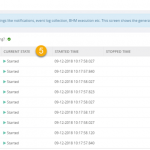 This article will help you to understand the architecture of the infrastructure details for various scenarios of high availability, multi-server and multiple environments setup.

With regards to High Availability of BizTalk360, there are few parts which can be made Highly Available/Load Balanced:

The UI, including the REST services, can be made Highly Available by installing BizTalk360 on multiple servers. By putting a software/hardware load balancer (NLB) in front of these BizTalk360 servers, the UI of BizTalk360 can be accessed via the virtual address which is provided by the NLB.
Independently whether one of the BizTalk360 servers is down, you will always be able to access BizTalk360 via the address of the NLB. This is in no way related to the high availability of the BizTalk360 NT services.

Depending on the license tier a company goes for, BizTalk360 comes with the following Windows NT services:

To split the responsibilities of the NT services, each of these services contains several sub-services. One of these sub-services is used for heartbeat and will be used in case BizTalk360 is installed on multiple servers.

The picture shows the BizTalk360 Monitoring Service, including its sub-services. See below list, for some more explanation about the capabilities:

To make these NT services highly available, BizTalk360 needs to be installed in multiple servers. At these servers, the BizTalk360 NT services must be started. From that moment on, the heartbeat of the services will be monitored cross-wise between the services on the BizTalk360 servers. For each (Monitoring and Analytics) service only one on either BizTalk360 machine can be Active. In other words, this is an Active-Passive configuration. Active-Active is not supported!

Below screenshot shows a configuration in which the BizTalk360 Monitoring service is installed in 2 servers. As you can see, the BTS2016LAB02 server is Active, which means that it is performing the monitoring tasks. The other server, the BTS2016LAB03, is not active. However, this server can be activated by clicking the Activate button.

Again, it is important to remember that although BizTalk360 can be installed on multiple servers, only one of these servers can be Active and performing the monitoring tasks.

For making the BizTalk360 database highly available, you need to use a clustered SQL instance. That could be the same SQL instance as where the BizTalk databases reside, but could also be a separate (clustered) instance.

As BizTalk Server can also be made High Available and Load Balanced, there are quite a lot of different scenarios possible, with respect to the server setup of both products. Let’s have a look at the most common scenarios and see how these scenarios affect the BizTalk360 licensing.

In our following scenario, we will see how to have multiple BizTalk Servers and a standalone BizTalk360.

Below is the diagram that explains how to have a multiple server setup for both BizTalk Server and BizTalk360 servers and its pre-requisites:

In this scenario, we have used two BizTalk360 servers, pointing to the same BizTalk group, which makes BizTalk360 highly available.

As we have seen, there can be several combinations of server setups, and it is purely based on the customer’s requirement and their infrastructural policies. What we explained are 4 various scenarios and their requirements. These are basic setups and the fundamentals will not change, even if you have other scenarios.

Test Lead at BizTalk360 – Software Testing Engineer having diverse exposure in various features and application testing with a comprehensive understanding of all aspects of SDLC. Strong knowledge to establish the testing process from the scratch. Love to test the software product to deliver it with good quality. Strongly believes on “Testing goes beyond just executing the test protocol”. View all posts by Mekala Ramesh