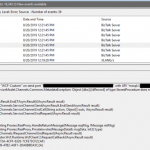 In the past, I wrote a blog post about a similar type of error: BizTalk WCF-SQL Error: Microsoft.ServiceModel.Channels.Common.MetadataException: Object [dbo].[StoredProcedureName] of type StoredProcedure does not exist. The difference for this new post is that instead of being the Stored Procedure name that is complaining it is now complaining about the Column name:

A message sent to adapter “WCF-Custom” on send port ” STAGING_SQL_WCF_SEND” with URI “mssql://SQL-SERVER-NAME//Database?” is suspended.
Error details: Microsoft.ServiceModel.Channels.Common.MetadataException: Object [dbo].[IdRecord] of type StoredProcedure does not exist

However, despite this error and despite the
fact that we were talking about the same server and same project of the previous
issue, one thing I was sure about: they were not related at all.

At a first glimpse, it seems that the stored
procedure does not include the column name: IdRecord, or that this field
was not passed to the stored procedure at all. So, this was my first point to validate,
however, quickly I realized that:

Just to precaution, I double-check if that was
not related to security permission, and it was not also. So I went back to my some
conspiracy theories list that I described on my previous post:

But the last one put me thinking: the
operation is not properly set.

Because the last change I did was redesign the
solution that was performing composite operations with the SQL Adapter, in my
case I was sending multiple-rows to update in the same message.

And now I was doing a single operation.

And by doing that the WCF-SQL Adapter was throwing
this strange behavior.

The solution was quite simple. We just have to
change the Action CompositeOperation with the correct operation action mapping
as show bellow as an example: