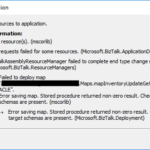 In my infamous crusade to document any BizTalk Server error that I have already come across, here is another error, warnings, cause, and solutions blog post, this time joining another of my favorite topic: Maps.

I came across this error during the progress phase:

Nevertheless, I was using BizTalk Server 2016, so that wasn’t the case. Luckily for us, the error provides a piece of clear evidence where the error is happening: FULLY-QUALIFIED-MAP-NAME.

To understand this issue, I went to my dev environment and opened that solution to analyze that specific map, mainly to know which schemas were being used. I then realize that one of the schemas was from an external assembly, a common schema that could be used by several applications.

The cause of this error was precisely that. I used a reference schema (external DLL) inside my map outside the project I was trying to deploy. But that assembly – DLL containing the map’s schema – was not yet deployed in the environment.

But once again, the critical point here is to make sure to deploy all schemas outside your solution that are being used. Because, even if we use specific projects for maps and schemas inside our solution, BizTalk Server is smart enough to see the dependencies and deploy it accordingly.

After installing the external assembly that contains the schema used by that map, I was able to deploy the BizTalk project into production successfully.