On 15th of January 2020, Microsoft announced the release of BizTalk Server 2020. There was a lot of buzz on social media about the release. Pretty much all of the posts were highlighting and excited about the new set of features that got shipped in the product.

Even though the release came with a bunch of exciting new features like any other regular software product updates, there are some important points to note, especially for people who invested heavily in Microsoft BizTalk Server for the past 2 decades.

BizTalk Server 2020 is not just a simple software update it’s a game-changer and beginning of a new era.

Two decades of past

That’s how long Microsoft BizTalk Server is in the market.

There are very few products in the history of software sustained a two decades life span and still going strong. On Microsoft land I can only think of a few products like Windows, Office, SQL Server are the ones which reached this milestone.

I’m feeling lucky enough to be one of them who worked on this amazing piece of technology for 20 years now. For most of the software developers out there, our career is pretty much determined by our initial few months/years after graduation and where we end up. For some people, you become programmers, again depending on what technology stack you got initial opportunities, some become data guys like DBA’s, IT administrators,  and in the modern era new things like AI/ML, Big Data, etc. For me, it was/is BizTalk Server and Integration in general.

In the past 20 years, I have seen various technologies come and go. We ourselves were bitten by choosing a wrong one for BizTalk360 in the initial days. Microsoft Silverlight as our front-end, the thing that looked flashy and promised to change the way Rich Internet Applications (RIA) are build quietly died and we ended up wasting full 1 year rebuilding everything in HTML5. We finally released version 7.0 back in Oct 2013 fully revamped in HTML5

Unless otherwise, the product solves a core problem well, the chances of sustainability for this long is pretty slim.

One decade of future commitment

When Microsoft releases a server product like BizTalk Server, they commit for 10 years of product support commitment. 5 years of regular support and another 5 years of extended support for you to comfortably run your production systems without worrying about the end of life.

It’s very important for large enterprises to get this commitment. As I mentioned earlier, you cannot afford to make wrong bets (like what we did on the front-end technology for BizTalk360 using Microsoft Silverlight), you simply end up with wasted time, money and more importantly opportunity. For us, that one year was a very painful period, with limited resources instead of building exciting new features for our customers, we ended up redoing the same thing.

Even for a large organization like Microsoft, it’s not easy to maintain and improve a legacy matured product like BizTalk Server.

During my long-standing relationship with BizTalk Server in this 20 years period, I have personally dealt with at least 4-5 different completely different sets of teams at Microsoft. This is what I have witnessed

“People will come, people will go but the product stays.”

I can imagine it will be such a hard job to bring people on board to get up to speed understanding such a vast platform and innovate on top of that mixing the old and new era.   In spite of the challenges, Microsoft still continued and innovated constantly for the past 20 years.

What goes behind the scene?

On every release, one of the important updates will be platform alignment. BizTalk Server relies on four important underlying platforms, the core Windows Operating System, SQL Server for data, Visual Studio for development tools and finally Microsoft Office for certain dependencies like BAM.

Supporting these new platforms is not always just a recompile of your code. For instance, the team had spent nearly 3 years rebuilding the tools for Visual Studio 2019. Some of the BizTalk Server toolings like Mapper and Orchestration designer is complex. Visual Studio 2019 changed the complete plugin-architecture and significant work has gone behind the scene to make it work.

There are few areas Microsoft does not highlight on the release notes, but that takes a significant amount of time for the product group like accelerators and adapters. Microsoft BizTalk Server is a central middleware hub supporting various industry standards like HL7, SWIFT, etc, these specifications change regularly as well, in every release they need to make sure they support the latest standards.

In a similar way, all those connecting BizTalk adapters like SAP, Oracle, JD Edwards, Peoplesoft, etc all need to be retested and realigned.

Being a global product there are a ton lot of legal procedures they need to pass through before a 20 year old product like BizTalk Server is released to the public.

You probably are not aware, some of the high-end military/defense teams across the world use BizTalk Server, it’s not that easy to commit a new release when you have such sensitive customers.

I remember having a conversation with one of the product owners of BizTalk Server in the past, how tough the whole legal process before they can get a go-ahead for the release.

Hub for modern and legacy world

If you look carefully at how Microsoft is positioning BizTalk Server 2020, it’s positioning it as a hub/window between the legacy and modern world.

The fact is, however the new cloud technology stack spans out and promises to change the world, there will always be an on-premise dependency. It will take at least another few decades (or never), for 100% cloud-native organizations to evolve.

Oh! Do you know still some of the big bank’s core systems are still running on IBM Mainframes built-in 1960 and ’70s?

The below picture depicts how Microsoft BizTalk Server can act as a glue between the on-prem and the cloud world and get most of the benefit out of both. 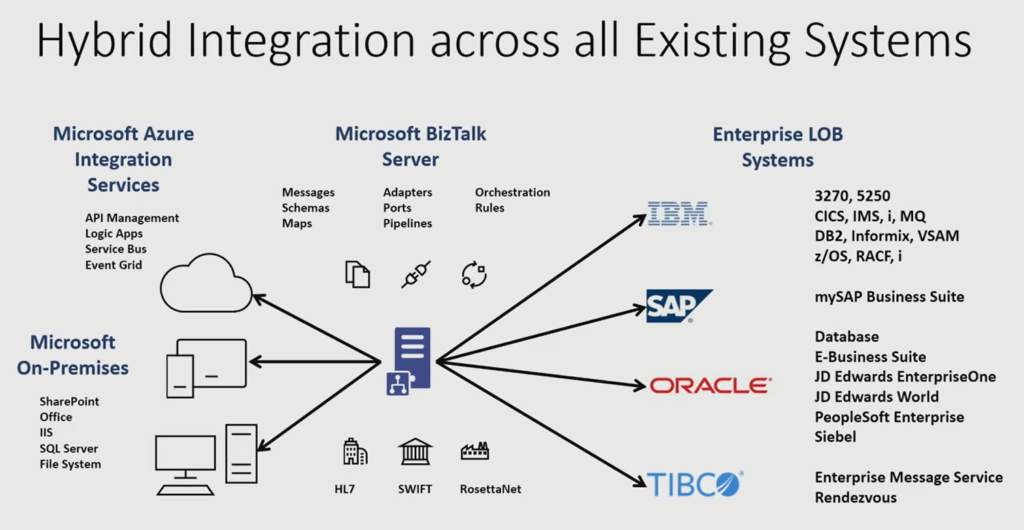 There are a lot of features that shipped with BizTalk Server 2020 supporting this vision.

If you are on a hunt for choosing your middleware platform, it’s not an easy decision to make. With a ton of new products available in the market and each product requiring months of learning to understand the capabilities, it’s never going to be easy to compare and test everything.

This long history of the product is such an important decision-making factor.

And the future commitment from Microsoft gearing towards the cloud makes it a perfect candidate for any organization to bet on this middleware platform.

Why BizTalk Server developers and administrators must be excited?

Learning a complex product like BizTalk Server is time consuming long term commitment. It takes years of work and the right projects to fully understand the product and its capabilities. If you have invested your time in the past few years being a BizTalk Developer or Administrator it’s a great time to be excited with the commitment from Microsoft on the future of BizTalk Server.

For those of you who are not aware of BizTalk360. I would like to give a short intro and excited to announce after working with Microsoft for the past few months, we are now fully supporting Microsoft BizTalk Server 2020 with our latest release.

BizTalk360 is a widely used product in the market with over 650 large enterprises helping them to manage/operate and monitor their BizTalk Server environments. BizTalk360 supports BizTalk Server 2013, 2013 R2, 2016 and now 2020.

You can get a 30 days trial version of BizTalk360 and explore the product yourself or arrange for a personal demo of the product.

The post BizTalk Server 2020 – Why it’s a game-changer? appeared first on BizTalk360.