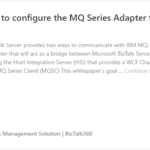 Surprisingly enough, or not, legacy systems can still be found across many organizations. IBM MQ is a family of message-oriented middleware products that IBM launched in December 1993. It was called MQSeries initially and was renamed WebSphere MQ in 2002 to join the suite of WebSphere products. In April 2014, it was renamed to IBM MQ.

We can mainly see the use and the need for integration with these products in banks systems. BizTalk Server provides two ways to communicate with IBM MQ:

This whitepaper’s goal is not how to install and configure MQSeries, neither compare the advantages or disadvantages of using this adapter compared to MQSC. Instead, this whitepaper’s focus is on improving the performance of the MQSeries adapter to better support low latency scenarios that most of the time are required in financial transactions.

You can also find, download and enjoy several other free whitepapers of my own here: