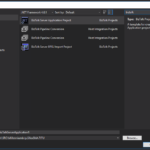 It is not a common situation in a BizTalk Server Development environment, but I cannot say that this is the first time I have found this issue.

I tried to see if the project template was available on the local system. Normally VS stores the available templates at Program Files(x86) -> Microsoft Visual Studio 14.0 -> Common7 -> IDE -> ProjectTemplates, but the template was there:

I don’t know very precisely why Visual Studio was not loading the most critical BizTalk Server Visual Studio template, and it is hard to find the proper cause of this issue.

Of course, this problem was not related to the lack of installation of the development tools and the SDK. The Developer tools and SDK component was installed during the BizTalk Server installation.

On a quick search over this issue, I found several mentions that you could solve this issue by installing the template available on the Visual Studio Marketplace. According to the documentation, this template is available for Visual Studio 2015, 2017 (?), and 2019.

However, trying to install this template using the marketplace, I got a dependency alert for Visual Studio MPF 16.0. I try to follow the instructions provide by Microsoft to overcome this problem in which you can get more information here, but without any practical effect.

So, I went applying the traditional method to solve the problem of the missing template.

To fix this issue, the solution is quite simple: