BizTalk Assessment: How to check if Windows Defender is running on BizTalk Server with PowerShell 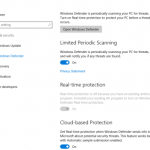 Why checking if Windows Defender is running on BizTalk Server, or another anti-virus, is important? I have been creating several BizTalk Server 2016 Developer environments on Azure using Azure Virtual Machines, normally I tend to be careful in choosing the VM Disk type – SSD can be expensive – and the size of the virtual machine – I would love to use a 4-core machine with 28GB but still using a HHD disk it will cost me near 430€ per month – so, because of the pricing I’m usually choose a modest machine from 1-core and 3.5 GB RAM or up to 4-core and 8GB RAM.

They tend to be a little slow, so tuning it well is important for archive a better performance and by default Windows Defender is configured on that machines. Not only as a negative impact in the general performance of the machine but also can have a huge impact on BizTalk Server performance. 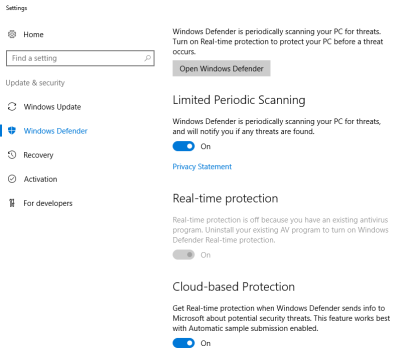 In this post, I will not address how you can disable Windows Defender, I will live it to another post and I will not address also all the possible existing Anti-virus in the market, instead, here I will focus only in Windows Defender for a simple reason: that this is the anti-virus installed by default in the BizTalk Server 2016 Developer Virtual Machines template on Azure. Neither to configure Anti-virus exclusions that you should do for BizTalk, for that a good blog post from MSFT: BizTalk Server Anti-Virus Exclusions

However, one of the first steps while doing one BizTalk environment performance, or even a basic, assessment is to find out if there is any Anti-virus running on your BizTalk Server.

So, I create this simple PowerShell script to use in all my environments just to check is Windows Defender that is installed and enabled by default in Windows Server 2016 is running on the Server:

The script to check if Windows Defender is running on BizTalk Server can be found and download on Microsoft TechNet Gallery: