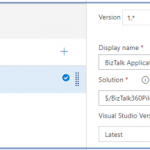 The process of BizTalk Application deployment is a complex, time consuming and repetitive task. Microsoft BizTalk Server comes with capabilities to create deployment packages. However, the MSI packages you create with the out-of-the-box features of BizTalk Server have some shortcomings which lead to deployments which are error-prone.

To eliminate the manual process, organization’s start to adopt the DevOps practice. In this article, we will see how the BizTalk360 API’s are helpful in a BizTalk environment monitoring while deploying BizTalk Applications using Azure CI/CD Pipelines.

With Automated build/release definitions you can set up the CI or CICD Pipelines based on environment (Development/QA/Staging/Production):

In the BizTalk Application deployment process, you can create the following build/release definitions:

We can use the following steps in Build definitions to achieve the above scenario;

Automation of Build and/or Deployment will be helpful to reduce the turnaround time. Hopefully, this article has provided insight in how you can setup the BizTalk Application Deployment automation and how you can utilize BizTalk360 API’s to stop alert during deployment and how to set up monitoring of the newly deployed BizTalk Artifacts.

Get started with the free 30 days trial. For any queries/feedback please write to us support@biztalk360.com.