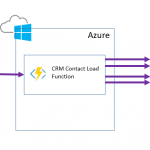 Recently I had the opportunity to look at the options for combining BizTalk and Azure Functions for some real world scenarios. The most likely scenarios today are:

This is great because this gives us support for synchronous and asynchronous execution of a function from BizTalk.

The queue option doesn’t really need any elaboration, there is an adapter to call Service Bus from BizTalk and there are lots of resources out there to show you how to use a Queue trigger in a function.

What I did want to show however was an example of how to call a function using the http trigger. First question though is why would you want to do this?

I think the best example would be when using a façade pattern. This is a pattern we use a lot where we often create a web service component to encapsulate some logic to call an external system and then we call that web service from BizTalk. The idea is that we make the interaction from BizTalk to the web service simple and the web service hides the complexity. In the real world we usually do this for the following reasons:

Azure Functions offers us an alternative way to implement the façade component compared to using a normal web service which we might host in IIS or on Azure App Service. Lets take a look at an imaginary architecture showing this in action.

In this example imagine that BizTalk makes a call to the function. In the function it makes multiple calls to CRM to lookup various entity relationships and then create a final entity to insert. This would be a typical use of the façade pattern for this type of integration.

In the video below I show an example of consuming a function from BizTalk.

What would I like to see Microsoft do with BizTalk + Functions?

There are lots of ways you can use Functions today from within BizTalk, but Microsoft are now investing quite heavily in enhancing BizTalk and combining it with cloud features. I would love to see some “Call Function” out of the box capabilities.

Imagine if BizTalk included some platform settings where you could register a function. This would mean a list of functions which had a friendly name, the url to call the function and a key for calling it. Maybe there was a couple of variations on this register function capability so you could use it from different places. First off:

This would be like the expression shape in some ways but by externalising the logic into a function it would become much easier to change the logic if needed.

We drag the azure function functoid onto the map designer. We wire up the input parameters and destination. You supply your friendly named function from the functions you have registered with BizTalk. When the map executes again it makes an http call to the function. The function would probably have to make some assumptions about the data it was getting, maybe a collection of strings coming in and a single string coming out which the map could then further convert to other data types

The use of a function in mapping would be great for reference data mapping where you want an easy way to change the code at runtime.