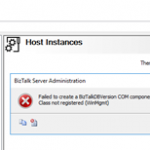 Failed to create a BizTalkDBVersion COM component installed with a BizTalk server.

And based on that you wouldn’t be able for example to: restart the host instances from the BizTalk Server Administration console.

Happy to inform you that Microsoft already released a new security update that will fix this problem.

As official documentation (https://support.microsoft.com/en-gb/help/4345913/access-denied-errors-after-installing-july-2018-security-rollup-update) state: Applications that rely on .NET Framework to initialize a COM component and that run with restricted permissions may fail to start or run correctly after you install the July 2018 Security and Quality Rollup updates for .NET Framework.

Microsoft .NET Framework runtime uses the process token to determine whether the process is running within an elevated context. These system calls can fail if the required process inspection permissions are not present. This causes an “access denied” error.

After you install any of the July 2018 .NET Framework Security Updates, a COM component fails to load because of “access denied,” “class not registered,” or “internal failure occurred for unknown reasons” errors.

So, the cause of these problems was security updates that were released by Microsoft on July 10, 2018.

On July 30, 2018 Microsoft released new Security Updates https://www.catalog.update.microsoft.com/Search.aspx?q=4346877 that will fix these issues.

To solve my problem, I:

After I restarted my BizTalk Server machine, this problem was fixed.