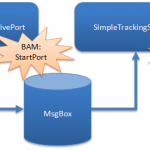 There are integrations which only purpose is to move a file just as it is. No advanced routing. No orchestration processing. No transformation. Just a simple port-to-port messaging scenario.

It is however still a good idea to monitor these just as one would monitor a more complicated integration. We use BAM to monitor all our integrations and to measure how many messages that has been processed in a integration. Using BAM monitoring in a simple solution as the above however has its issues …

Setting up a simple test solution

Our tracking profile configuration will like below. Dead simple.

So – what’s the problem?

Let us drop a XML message looking some like this.

As soon as BAM tracking is configured on a port that is however not the case. Lets take a look at the file we receive on the other end of our integration.

As we also don’t have a installed schema it is not possible to use a XMLTransmit pipeline to add the XML declaration and remove the BOM.

If you’d like to track a XML based message using BAM make sure you have the schema installed … Even if you are just using PassThru.

Is it a bug or just something one should expect? In my opinion it is at least very annoying!