This blog post serves as a quick recap of and expansion on my October 19th Integration Monday talk titled Building Push Triggers for Logic Apps. You can view the session and look through the slides over at integrationusergroup.com. In the … Continue reading →

In one of our earlier blog post, we mentioned how Microsoft is taking the effort to shape a community driven approach by organizing a monthly “Google Hangout session” to communicate the latest updates in the filed of Azure Logic Apps. This month’s session – fifth in the series – happened yesterday (October 29th). You can […]

Why Every Company Should Visit Their Customers Frequently?

I’m writing this blogfrom Calgary, Canada where I’ll be speakingat “Azure Hybrid Integration Day” along with fellow MVP’s. This is my first time at Calgary. When the opportunity came few months ago, I decided to spend few additionaldays here to meet with fewof our long term customers. Calgary is well knownfor Energy, Oil and Gas […]

The post Why Every Company Should Visit Their Customers Frequently? appeared first on BizTalk360 Blog.

Further to my post about deploying BizTalk solution using Octopus found here, this post will describe the substitution of variables in Octopus 3.0 release. In Octopus 2.x.x release, we had Octopus.Platform.dll which gets the variable information from the octopus database, however in octopus 3.0 this feature is removed and not included any more.

This will prevent us to use “Substitute variables in files” process template available on Octopus community. To overcome this issue, I’ve to write custom power shell script to replace variable. Yes, there is in-built substitute variable feature in octopus, apparently we cannot use it, because BizTalk deployment is slightly different from .Net.

This is the custom variable replacement function”:

This is how it is called:

If someone has a better approach then please let me know.

Further to my post about deploying BizTalk solution using Octopus found here, this post will describe the substitution of variables in Octopus 3.0 release. In Octopus 2.x.x release, we had Octopus.Platform.dll which gets the variable information from the octopus database, however in octopus 3.0 this feature is removed and not included any more. This will […]

BizTalk Server: Teach me something new about Flat Files (or not) – Delimited Flat File Schema Optimizations

We ended last post asking: Do you think the schema is entirely correct? Does it handles with all files accordingly to the expected results? Or do we need to tune some of the properties of your schema When we start working with Flat File schemas for BizTalk, we may think that just using the Flat […] 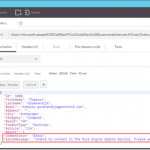 When you create a Web API you can use it for your own applications but maybe you also want to expose it to the outside world. In that case you probably want to change the behavior of the Web API. For example add security or hide properties. You can use BizTalk to create a virtual service in front of your Web API to modify the behavior but is that the smartest choice?  Because BizTalk writes every message that it receives a couple of times to the MessageBox database. This increases heavily the execution time and especially with Web APIs it’s important to have a really low execution time!

Let’s have a look at the following example where an Order Web API is used inside an organization to process orders. This Web API must also be exposed to external customers to show the status of an order but if an error occurs in the Web API or in a background process, the OrderStatus property must be modified that the order is still in progress and the ErrorMessage property with the error must not be shown to the customers. Furthermore the output of the Web API must be in XML instead of JSON.

The following steps in Sentinet are necessary to make it work:

Sentinet makes it really easy to modify the response of a Web API. You only have to create a Virtual Service in front of it and add custom Pipeline Processing! Especially if you are already familiar with XPATH and XSLT, the example above doesn’t take long to implement.

In September Microsoft added the Performance test feature in the Azure Preview Portal to check your Web App’s performance. For API Apps this is also very important and because API Apps are built on top of Web Apps I was very curious if I can also use this feature for API Apps! The Web App that hosts an API App is called the API App Host in the Azure preview portal, so on the API App host blade I tried to go to the Tools menu where the Performance test feature resides.

Unfortunately I got an error so the Tools menu doesn’t seem to work for API Apps but there is another way. You can also add the Performance test tile directly on your API App blade!

See the following steps how to do it.

Getting started with the Logic Apps SDK

The first Logic Apps SDK for .NET (v0.1.0) was released on August 28th.
Stephen Siciliano covered it in the LogicAppsIO Community WebCast on August 27th.
But there haven’t been many blog posts on how to use it, nor many samples.
So here we go: How to use the SDK…

What Are All of Microsoft Azure’s Application Integration Services?

As a Microsoft MVP for Integration – or however I’m categorized now – I keep a keen interest in where Microsoft is going with (app) integration technologies. Admittedly, I’ve had trouble keeping up with all the various changes, and thought… Read More ›