Every year some of the brightest minds in Microsoft Integration descend upon Redmond, Washington for the Microsoft MVP Summit. This year 3 MVPs (Saravana Kumar, Steef-Jan Wiggers and Michael Stephenson) from Europe will be stopping by Calgary on their way to the Summit and will be giving some presentations.   Myself and a local Microsoft employee, Darren King, will also be presenting.

I have shared the stage with these MVPs before and can vouch that attendees are in for a unique experience as they discuss their experiences with Microsoft Azure and BizTalk Server.

During this full day of sessions you will learn about how BizTalk and Microsoft Azure can address integration challenges. Session topics include SaaS connectivity, IoT, Hybrid SQL Server, BizTalk administration & operations and Two Speed IT using Microsoft Azure. Also bring your burning questions for our interactive Ask the Experts Q & A.

The free event takes place on October 30th, 2015  at the Calgary Microsoft office.  You can find more details here.

This post is for the BizTalk Server and other Portuguese Community, will be held on September 30, 2015 between 18:45 – 21:30 the XI Porto.Data Community meeting at the Science and Technology Park of University of Porto (UPTEC) in Oporto. For me it is a pleasure to return, for the second time this year, to […]

In a community driven approach from Microsoft, the Logic Apps team have been conducting a “Google Hangout session” every month to let the community stay up-to-date on their technology developments. This is a nice way for them to reach out and engage withthe community to gain feedback of thefeatures. We thought it would be good […] 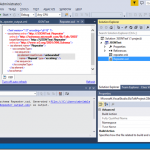 I wanted to know whether the out of the box  JSON encoder pipeline component creates an JSON array  if there is only one repeating XML fragment. One of my colleagues found with BizTalk 2013 he had to add an array attribute to the XML to force the creation of a JSON array (https://connectedcircuits.wordpress.com/2014/03/27/sending-json-messages-from-a-biztalk2013-adaptor/).

I created a test schema shown below and deployed it to my run time.

The XML message was then processed on a send port with a pipeline that only contained the JSON encoder pipeline component. Voila! I got the correct output shown below;

Thanks Microsoft this has saved me a lot of extra work that i had to do in BizTalk 2013. 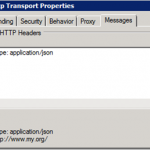 I had a requirement where I needed to send a message to a web API that only accepted messages as JSON.

BizTalk2013 provides a WCF-WebHttp adaptor for sending sending XML messages to a REST endpoint but not in JSON format. There are rumours this will be remedied in BizTalk2013R2, unfortunately I required a solution now.

So in the meantime I will use the the Json.NET component to convert the XML message to JSON. I also found this blog from http://blog.quicklearn.com/2013/09/06/biztalk-server-2013-support-for-restful-services-part-45/ to convert XML messages to JSON using the Json.net in a custom pipeline component which I ended up using with some mods.

When using this pipeline remember to set the Outbound HTTP Headers as shown below:

This all worked a treat until during the unit testing phase I created a sample XML document with only one repeating element.This caused the following error from the Web API.

Can not deserialize instance…

Creating a Web Service in Azure, Part 1- Introduction and Architecture

With Integration Monday gaining a wider audience reach, we thought it would be apt to get some sessions from the Product Group guys to let the community know what’s happening in the space of Azure and related technologies. The last two sessions (on September 14 & September 21) were on Service Bus and Azure API […]

With the introduction of Azure Resource Manager (ARM) the world of Infrastructure as a Service (IaaS) inside Azure changed – for the better.

With these changes introduced the AzureResourceManager PowerShell module.  I could write many posts on this along, but not to get into to many details you now have two ways to do many things in Windows Azure using PowerShell.  This gets a little more complex considering additional breaking changes are coming soon when Switch-AzureMode is deprecated and the introduction of both traditional and classic versions of some Azure Artifacts like storage and virtual machines.   Going forward I would recommend using AzureResourceManager based PowerShell commands for all new scripts.

Never the less, the way to create a new Virtual Machine is a little more complex now using AzureResourceManager.  This is due to the greatly enhanced feature set in Azure that we just did not have a few years ago.  As part of these changes, you need to call out your base image disk differently than before.  Lets take a look at the two options.

Using Azure Resource Manager (ARM- will be the new default)

With Azure Service Manger you only need to supply the operating system image name and this can easily be found doing a single PowerShell query.
With Azure Resource Manger you need to specify a Publisher Name, Offer, SKU, and Version of the Operating System Azure Image you want to use.  It is not as easy or straight forward to get these values.

Below I have put together a quick reference list related to BizTalk Server, SQL Server, and Windows as well as the PowerShell scripts to get these values for any other operating system image.

* some of the SQL SKUs contain other types of optimized versions.

If you want to get the Publisher Name, Offer, and SKU for other Azure Images you can use these PowerShell commands.

If you weren’t one of the students that attended the recent Cloud-Based Integration Using Azure App Service class offered by QuickLearn you really missed out. I was able to attend and found the experience very informative.

Some technologies lend themselves to simply picking up a book and reading about how it works. BizTalk Server has never been one of those products and it looks like for the foreseeable future at least Azure App Services and Logic Apps are going to fall into that same category. It’s a good thing that Rob Callaway and Nick Hauenstein are braving the front lines to create and deliver quality training for all of us that are too busy to keep up with the rapid changes in Azure.

This class was delivered by Rob Callaway, one of the best BizTalk and now Azure App Services instructors in the world! This three day class had an eclectic international audience with people traveling from Canada and Europe to attend the course.

As you can tell from the overview this class is jam-packed with everything that you need to prepare to build integration solutions using Microsoft’s newest addition to Azure App Service, Logic Apps. Since there is so much that goes into creating a logic app the class feels a bit like a snowball rolling down hill, it starts small but as it progresses the knowledge you gain becomes almost overwhelming. The labs ensure that you don’t get lost in the cloud (pun IS intended) by providing a rich hands on experience to match the excellent lecture.

As an integration specialist, I felt very comfortable with the early concepts. By the time we got into day two everything was new as we built first simple and then more complex logic apps.

For the uninitiated a logic app is comprised of triggers and actions which are themselves API Apps. These API Apps are in turn Web Apps that perform some simple function. This whole thing is hosted in Azure. When strung together a Logic App can be very powerful providing capabilities similar to BizTalk orchestrations.

We didn’t just explore Microsoft Azure App Services, but learned how to integrate with Microsoft Azure Service Bus as a reliable and persistent store for inbound and outbound data, and identified the role that Microsoft Azure BizTalk Services (MABS) plays in cloud-based integration. By the end of the course the participants were even able to build their own custom API Apps, no small feat!

The goal of the course, one that I think all the participants would agree was achieved, is to provide the best training possible on these evolving technologies. QuickLearn Training is able to deliver on this goal because we have spent the last two years digging through the sometimes scant documentation and Microsoft presentations to find the golden acorns of knowledge that we happily share with our customers.

One of the benefits of our close relationship with the product team and our proximity to the Microsoft campus is that from time to time we have special visitors. We appreciated Mark Mortimore and Jeff Hollan for taking time out of their busy schedules to drop by on Thursday evening for a meet and greet with the students. Students provided Jeff with some great feedback for features in Logic Apps, and they even convinced Jeff to take a BizTalk Server course. While we don’t always get our friends at Microsoft to visit when we do it’s exciting and fun.

To wrap up the class on Friday we had a special guest appearance by our own Nick Hauenstein where he previewed his Creating a Push Trigger API App to Process NFC Tag Reads demonstration that he will be delivering at the upcoming AzureCon2015 on September 29th.

What The Participants Are Saying

Rob did a great job helping the attendees navigate the mine field or maybe, given the mental challenge, that should read MIND field, of creating and configuring Microsoft Azure Logic Apps.

Some of the feedback that we received from the attendees of this class:

…the QuickLearn materials were flawless and perfectly adapted to the objective of the course…I think that the learning environment is close to perfect and I’m having a hard time thinking of anything that should be changed.

The pace of his speech is very easy and pleasant to follow. Important points are made and repeated, often with humor, which is yet another demonstration that Rob masters his topic and enjoys sharing his knowledge.

This class probably needs to be at least 4 days if not a week.  Need more time to complete labs.

With an evolving set of technologies such as this there were inevitable additions that were made between the initial deliveries of this course and the most recent one. With this new content the class will simply not fit into the three day time-box that we initially allotted. As a result of these additions, and the feedback that we got from the recent class, we are excited to announce that the Cloud-Based Integration Using Azure App Service class is being extended to five days!

Your first opportunity to attend this new expanded version of the class is November 30th. As with all QuickLearn Training classes it is offered for remote attendance if you prefer but of course you are all invited to attend at our state-of-the-art facilities in Kirkland Washington as well.

I predict that within one year, your customers will be asking you about cloud based integration. Wouldn’t you rather be the one that knows the answers already, and have several months experience under your belt?

If you are worried that new features will be added that you miss out on by being an early adopter, QuickLearn Training always offers the opportunity for students to retake any class within six months, thus future-proofing your learning. As new features are added to these technologies you can bet that we will do our best to stay on top of the changes so that we can share that knowledge with you.

So indeed if you weren’t one of the students that attended the recent Cloud-Based Integration Using Azure App Service class offered by QuickLearn you really missed out, but you have another chance to mend your ways and get an improved and lengthened version of the course. Don’t miss out on this great opportunity.

If you weren’t one of the students that attended the recent Cloud-Based Integration Using Azure App Service class offered by QuickLearnyou really missed out. Some technologies lend themselves to simply picking up a book and reading about how it works. … Continue reading →