I was working with Windows Azure Automation using a MSDN account to create a run book that will run nightly to turn off all my running virtual machines.

This is super easy and you area even provided a sample script that all you need to do is set your Active Directory (AD) User Name and your Subscription Name.

Once I completed this and created an Automation Asset of Type Credential for my newly created AD User I was all set to go.  The AD User has been added as a co-administrator on the account to allow them access to the virtual machines.

With this configuration I received the following errors.

Lets loos closer at the User Name value setup in the Credential:

That’s right is has a space at the end of the name from doing a copy and paste of the user name.

If you run into this error you will want to check your user name setup under both the Asset Type of Credential and your user name entered in your script.

Once I removed the space everything worked as expected..

One of the core tenets of RESTFul architecture is that APIs should support content negotiation. That is to say that the service consumer should be able to tell the service through the use of the Accept HTTP header what format the response message should be returned in. On the flip side, it is commonly accepted […] 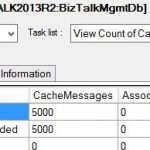 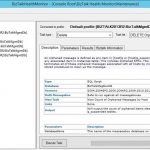 Disclaimer – Shameless (but hopefully informational) plug follows 🙂 Close to a year ago myself and my colleagues Mark, Mahindra, and Colin were approached by Packt Publishing to update Richard Seroter’s “SOA Patterns with BizTalk Server 2009” book for BizTalk Server 2013. We considered this a great honour seeing as the base material in the […]

I have just released v1.6.0 of the BRE Pipeline Framework to the CodePlex project page. The framework is now mature enough that it’s core has not changed much this time around, but there are still tons of new features and optimizations to be found in this version. For a recap on what the framework is […]

So the App Service product group did a Google Hangout today (basically a live YouTube stream) and gave some updates on Logic Apps, along with some demos on chaining Logic Apps, calling a Logic App from another Logic App etc…

One of the key areas to focus on when using Service Bus Relays to expose on premise BizTalk hosted WCF services externally without making any firewall changes is availability. Service Bus Relay endpoints in Azure will only be enlisted upon initialization of your on premise service. NOT when your application pool starts, NOT when you […]

While working on a project using the WCF webHttpRelayBinding binding with SAS based authentication over transport security, I found that my services were taking a very long time to spin up (30-60 seconds) and that my runtime performance was a bit less than optimal in terms of latency (and I had proven that the latency […]