If you are really excited about the Microsoft Integration Stack and of course Microsoft BizTalk Server, you should absolutely attend the BizTalk Summit 2015 !

If you are really excited about the Microsoft Integration Stack and of course Microsoft BizTalk Server, you should absolutely attend the BizTalk Summit 2015 !

Working with CDATA Elements inside a BizTalk Map

For the past 14 years I have not done a lot with CDATA Elements.  If you do not know much about them, they are tags you put around a blob of data to tell the XML parsing systems to skip over them.  It will allow you to have < and & inside the data block without having to escape them.  They can be useful if you need to place another XML messages inside another one without having to worry about escaping the inner XML tags.

How does BizTalk handle CDATA?  Well, BizTalk does what it should when it receives a node with a CDATA section.  The XML Disassembler skips the parsing of the inner data.  The maps are where you can run into issues because they will remove the CDATA tags when the data is being mapped.

Luckily they provided a way for you to add the CDATA sections back into the output message to ensure they are escaped correctly.  You can do that by setting the property called CDATA section elements. 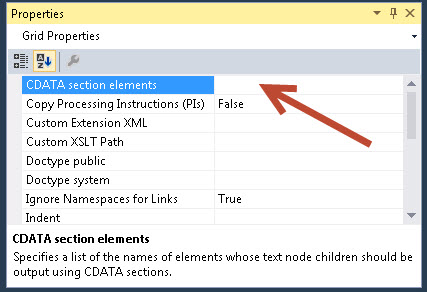 This is accessible by clicking any open area on the map canvas.  While this looks straight forward, it is a little tricky.  This property needs to be a namespace prefixed space separated list of values that you want to be enclosed in CDATA.  Lets look at the example below and assume a default namespace of ns0.

If you wanted all three nodes on the output to have CDATA tags you would set the CDATA section elements property to:
”ns0:AddressXML ns0:OrderXML ns0:HistoryXML”

Something else to point out is the mapper does runtime validation on the elements in the CDATA section elements property.  If you entered ns4:Item and ns4 was not a defined namespace prefix you will get an exception when the map runs.

Hope you learned a little about how BizTalk Maps handles CDATA.  Enjoy.

Almost one month after I have released, BizTalk Scheduled Task Adapter suffered its first update in order to fix one important bug. One of the important bug that was fixed in the previous version (5.0) was the support for timespan with more than 60 seconds, but while doing that I unintentionally create another bug. The […] 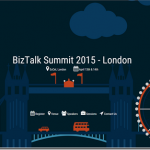 In my last post I created some awareness on the upcoming BizTalk Summit in London, 13 and 14th of April. This event will be the biggest Microsoft integration focussed summit in Europe. Microsoft BizTalk product group, Microsoft Integration MVP and veterans will speak about integration, Azure and API Management.This event is once again, like the previous two events, being organized by BizTalk360 in conjunction with Microsoft and the BizTalk Product group. There are various reasons you can think to attend like for instance described in the blog post by one of the speakers Sandro Pereira.

My topic is on Hybrid connectivity and more specifically what BizTalk Server 2013 R2 platform offers today. You can read the details below.

The IT world has changed with the rise of the internet (cloud). Google, Amazon and Microsoft offer a variety of services in the cloud for storage to applications. Besides them there are a ton of other vendors selling software as a service (SaaS), or provide a dedicated service for instance Drop Box offering storage on demand. This means that integrating on premise, cloud services and software will generate a new demand. Enterprises will now face these challenges as they will need to integrate their on premise systems that are not likely to move to the cloud like SAP with cloud services or solutions. The latest BizTalk Server release 2013 R2 offers capabilities to full fill the demand for a new hybrid type of integration solution. In this talk various hybrid integration scenario’s will be discussed and how you can leverage Microsoft BizTalk Server 2013 R2 to build these solutions.

After this event, I will the week after travel to Sweden for Swedisch User Group event in Gothenburg and Stockholm. I am invited by Johan Hedberg to join him on stage to talk about API Management, on-premise (Sentinet) and Azure API Management.

The last stop for me in April will be the BizTalk Bootcamp in Charlotte, US. Two years I was invited to come over and talk, but was unable to make it. However, this time I will be there! I will speak on similar topics like the London event, with probability to do other talks on API management and BizTalk extensibility. The event is being organized by Mandi Ohlinger who works for Microsoft and is responsible for a lot of the technical content that you find on Azure BizTalk Services and BizTalk Server. This is a free event and registration is necessary!

See you on the road on any of these events.

In my last post I created some awareness on the upcoming BizTalk Summit in London, 13 and 14th of April. This event will be the biggest Microsoft integration focussed summit in Europe. Microsoft BizTalk product group, Microsoft Integration MVP and veterans will speak about integration, Azure and API Management.This event is once again, like the previous two events, being organized by BizTalk360

I'm excited to announce the release of BizTalk Health Monitor (aka BHM) v3 !

The BHM team collected a lot of feedback from BHM users to enrich the tool with new features while at the same time making it more reliable to provide a better experience.
Version 3 brings many great new features and one major one:  the integration of the famous Terminator application making BHM a complete BizTalk maintenance solution – checking the health of any BizTalk platform and providing remediation capabilities.  The entire remediation power of Terminator is now included in BHM!

The BizTalk Health Monitor MMC snap-in shares the same analysis and repository engine as MBV application and has been available since June 2014 with the release of BizTalk Server 2013 R2.  Since then, it has been continuously updated with new features to provide more flexibility and power to BizTalk administrators in their monitoring and maintenance tasks.
As mentioned in my previous post, there will be no further public updates of MBV, as BHM is now the recommended free solution for a BizTalk group health check.

Click here for more details on the V3 release

BHM gives you a powerful and customizable dashboard to monitor the health of your BizTalk group and can be enriched with custom queries (SQL, WMI, PS, etc..) and custom rules.  It can be added to the existing BizTalk Administration Console or run individually to provide the following features:

In my last post I described Top 7 Reasons to attend BizTalk Summit London 2015 event and as I mention there this year this annual event will be even bigger and better! There are already 250 registrations (based on what I heard from the speaker update email) and we will have a capacity for 500 […]