For a while we were planning to do an event in Australia, but the magnitude of arranging something on the other side of the planet was daunting and we couldn’t persuade it for a long time. It all changed when Dean Robertson from Mexia consulting attended our popular BizTalk Summit London event this year and […]

In my last post I explained how to implement Unit Testing in Schemas and Maps in BizTalk Server 2013 project within Visual Studio 2012. I also describe that there is an issue when we try to perform Unit Testing in maps and each time we try to run the unit test it give us the […]

When a transformation or routing process fails, the ESB creates an exception message and submits it through a direct-bound port to the Message Box database. The ESB also implements a send port named ALL.Exceptions that subscribes to and retrieves exception messages and publishes them to the ESB Management Portal.
The ESB Management Portal that ships with the ESB Toolkit is a sample website and is not really intended for production environments. Installation can also be quite difficult because the sample depends on many other components that must be installed first before the ESB Management Portal can be installed and there is not much documentation about it. Because of the installation difficulties there are quite some blogs created on how to install the Portal and there are also many questions about it in the BizTalk ESB Toolkit forum.
Another option is to access the ESB exception data directly via BizTalk360. In that case you only have to do one simple configuration in the BizTalk360 settings and you can avoid using different portals and tools to access your data, BizTalk360 consolidates everything in one place, making you productive.

The ESB Portal in BizTalk360 works very well. Almost no configuration, the navigation is clear, it’s fast and the design is pretty. It would be nice that you could also edit and resubmit the fault message but the company stated that they are bringing a lot of new features as part of future release like Edit, Resubmit, Bulk Resubmit and more!

To implement BizTalk Server 2013 unit test within Visual Studio 2012 to test Schemas and Map we need to: Open your BizTalk Project in Visual Studio.NET 2012, in this sample: “UnitTestingFeatureWithMaps.sln” In Solution Explorer, right-click in the BizTalk Server project, in this sample “UnitTestingFeatureWithMaps”, and then click Properties. In Project Designer, click the Deployment property […] 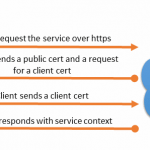 Digital certificates and asymmetric security is notoriously hard to get right in a Windows environment. Getting it right in a BizTalk context isn’t exactly easier.

In this scenario a BizTalk Server act as a client and communicates with a service over https. The service also uses a client certificate for client authentication.

Third party root certificates always needs to be places under “Third-Party Root Certification Authorities” or directly under the “Trusted Root Certification Authorities” folder on Local Machine level in Windows. When however also configuring the “WCF-BasicHttp” adapter to also use client certificate authorization the BizTalk Administration console requires the thumbprint id of a specific server certificate (in addition to the client certificate thumbprint). This makes the runtime also look for the for the public certificates under “Trusted People” folder and causes an error if we don’t also place it that folder.

In the end this requires us to add the public root certificate in two different places.

Let’s start by getting the server certificate right.

After configuring everything in BizTalk using a standard WCF-BasicHttp port and selecting Transport security I encountered the following error message.

A message sent to adapter “WCF-BasicHttp” on send port “SP1” with URI “https://skattjakt.cloudapp.net/Service1.svc” is suspended.

The error message is pretty straightforward: Could not establish trust relationship for the SSL/TLS secure channel with authority.

The first thing that happens when trying to establish SSL channel is that a public server certificate is sent down the client for the client to use when encrypting further messages to the server. This certificate is validated so it hasn’t been revoked, that it’s Valid to date hasn’t passed, that the Issued to name actually matches the services domain and so on.

But to be able to trust the information in the certificate it needs to be issued by someone we trust, a certificate authority (CA).

In our case the service didn’t use a certificate from one of the trusted authorities but had based their certificate on a root certificate they created themselves.

Further the Certificate Manager in Windows has three different levels: “Local Machine”, “Service” and “Current User”. The top level is the “Local Machine” and certificates added on this level are available for all users. “Service” and “Current User” are more specific and only available for specific services and users. From a BizTalk perspective it’s important to place the certificate so it’s accessible for the user running the BizTalk host instance.

So after requesting the used root certificate and placing it in the trusted authorities folder for the Local Machine we’re able to successfully establish an SSL session!

As the server however required a client certificate for authorization I reconfigured the send port to use Certificate as client credential type.

So in this case we need to add the public CA certificate in two different places for the communication to work.

8 Characteristics of our DevOps Organization

What is the human impact of DevOps? I recently got this question from a viewer of my recent DevOps: The Big Picture course on Pluralsight. @rseroter just watched your DevOps Pluralsight. Great tool discussion was hoping you could talk more on org structure….— Tim Barcz (@TimBarcz) August 16, 2014 I prepared this course based on […]

Sentinet is highly extendable through standard Microsoft .NET, WCF and WIF extensibility points, and through the Sentinet API interfaces.
In the last post we saw how to build a custom alert handler for SLA violations notification. In this 4th post I want to continue the Sentinet Extensibility series exploring another possible customization, the routing.

What if you could take all infrastructure cloud providers and combine their best assets into a single, perfect cloud? What would it look like? In my day job, I regularly see the sorts of things that cloud users ask for from a public cloud. These 9 things represent some of the most common requests: Scale. […]

We’re doing it again, and we are inviting you to join our BizTalk Innovation Day in Oslo.

For the third time the BizTalk Crew (Steef-Jan Wiggers, Sandro Pereira, Nino Crudele, Saravana Kumar and me) are hosting the BizTalk Innovation Day, one whole day with hardcore BizTalk!

We have decided to invite Cloud specialist Richard Sertoer from USA to tell us more about the future of integration both on-prem and in the cloud.

“The next decade looks to be one of the most disruptive in the short history of IT. New computing and architecture paradigms, an exploding number of connected devices, and new organization models have all directly impacted what systems integration will look like in the years ahead. What challenges has the cloud introduced? How does a DevOps commitment impact my integration approach? What role does integration play in the “internet of things”? In this session, we’ll talk about some of the mega-trends in the industry and how that may impact your approach to integration today and tomorrow.”

“Microsoft Azure BizTalk Service (MABS) is almost available to us for year. It is a newcomer in the world of integration Platform as a Service (iPaaS) and promising contender for the sweet spot in the Gartner’s Magic Quadrant. This service in Azure has a lot offer and can provide different means of integration in the changing IT world of on premise ERP systems, services, cloud and devices. In this session the audience will learn where the Microsoft Azure BizTalk Service stands in middle of the iPaaS world, what it has to offer today and what the road map will look like in the future. During the session, the audience will also see demo is showcasing the various service features from a development, deployment and operations perspective.”

Sandro Pereira will announce a new whitepaper and give us a detailed overview of the new “Transform Designer” in MABS “.

“Migrating current BizTalk Server projects to BizTalk Services or starting new BizTalk Services projects can provide some challenges because although the developing experience is very similar, we are still talking about a new integration platform on Azure, and one of the main differences is the way we apply messages transformation with the new Transform Designer.

In this session, we will see the main differences between BizTalk Mapper Design (BizTalk Server) and the Transform Designer (BizTalk Services).”

Nino Crudele will talk more about how to “Develop as an Integration person”.

“After the London session, thinking like an integration person, Nino Crudele will speak about the real approach in a real development environment. There exists a lot of strategies, theories and philosophies about what the best strategies to use during development, some of them are very useful, other expensive, other very wrong.

In this session, Nino will present his personal approach and mining about development in real, considering all important topics for a good BizTalk developer.”

Saravana Kumar is repeating his known announcements at the BizTalk Innovation Day in Norway by releasing some brand new awesome feature in BizTalk360:

“BID Norway kind of became our inaugural place for introducing major versions. Last year we showcased version 7.0 to the public at BID, Norway. Since then we were constantly adding new features to the product and accelerated our development process. We worked on some exciting features like Graphical Message Flow, Throttling Analyzer, Business Rules Visualizer, Managed Services etc. Lot of these new features are designed in helping BizTalk customers to improve their support/operations/monitoring efficiency. In this presentation, Saravana Kumar will showcase the top 10 features we added since our last BID visit. We may be in a position to showcase some of the bits that’s going to come in 8.0 planned for end of this year.”

Myself (Tord Glad Nordahl) will be talking more about how developers and admins can co-exist together in harmony.

“The fight is on, and I am ready to provide you with the best ways and ideas on how to effectively work better together as a team, who messes up what, and how can we collaborate better. And I’ll share some of the secrets from both world, follow the rules and see how much more effective your team can become.”

Early bird is available till September 7th, so hurry up. We have a maximum cap, and the tickets are running out fast!!