Due to lot of work and a presentations mainly on BizTalk Innovation day events, I still had not managed to create new articles on TechNet Wiki this year, despite having lots of ideas and ongoing projects. Unfortunately, with the weather not inviting outdoor activities in Portugal, a lot of rain, I got some free time […] 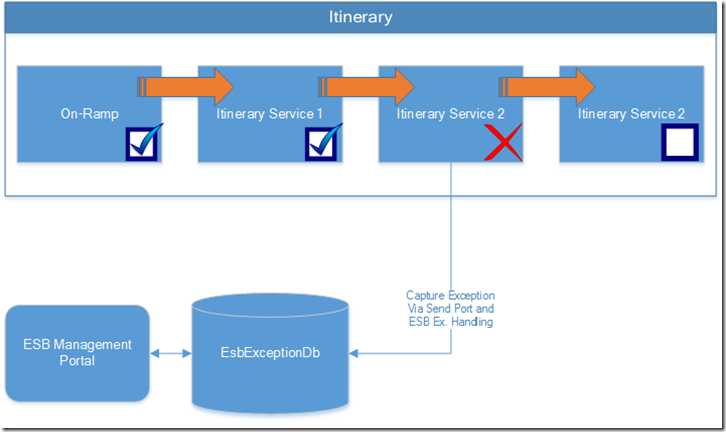 In my experience, the two most commonly used components of the ESB Toolkit are the Management Portal and Itineraries.  First thing I must remind everyone of is that the Management Portal is a SAMPLE application.  This means it is not production readybut you do have all of the source code.  If you want the functionality the portal provides, I recommend you extract the code into your organization’s source control system, and own the solution going forward.  I’ll cover my list of “things you must do to make the portal production ready” in another post.

Now to the main event.  When using Itinerary-based processing for your BizTalk solutions, you get some great features out of the box, with little to no effort.  One of these is the ability to continue processing an instance of an itinerary from the step at which it failed.  First, you must have the ESB Exception Management solution deployed.  This provides the EsbExceptionDb repository for storing exception and instance data of failed messages, as well as an out-of-the-box Send Port for populating the database when failures occur.  Second, you must both enable Failed Message Routing on all itinerary-used Send and Receive Ports and use the prescribed ESB exception handling in all itinerary-used orchestrations.

Once these steps are completed, you will see failed itinerary instances in the ESB Management Portal, along with the Itinerary XML in the message context.

At this point, enough information is available to submit the failed message to the out-of-the-box ESB On-Rampsyou just have to make a small tweak to the ESB Management Portal source code.  The following is a snippet of code from the out-of-box MessageViewer.ascx.cs file, located in the ESB.Portal\Faults folder.  The ResubmitMessage method is where all the magic happens. 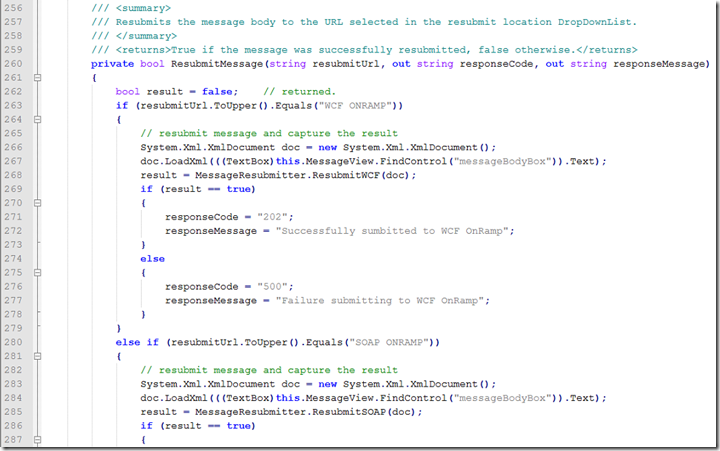 As you can see, depending on what the user does, the message could be resubmitted via a SOAP or WCF endpoint.  Both use a helper library called MessageResubmitter.  Looking at that library, you can see that both resubmission options do not include the Itinerary in the service request, even though it is available! 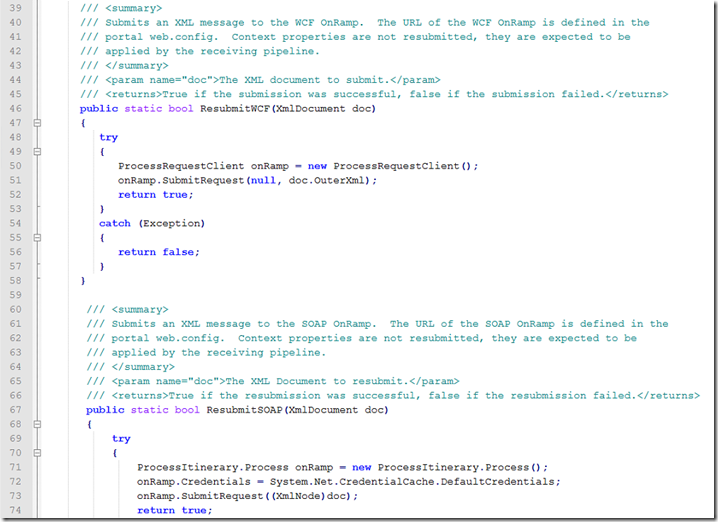 These services can each handle the itinerary being includedwe just have to add it to this client proxy code.  here is what it looks like post-modification: 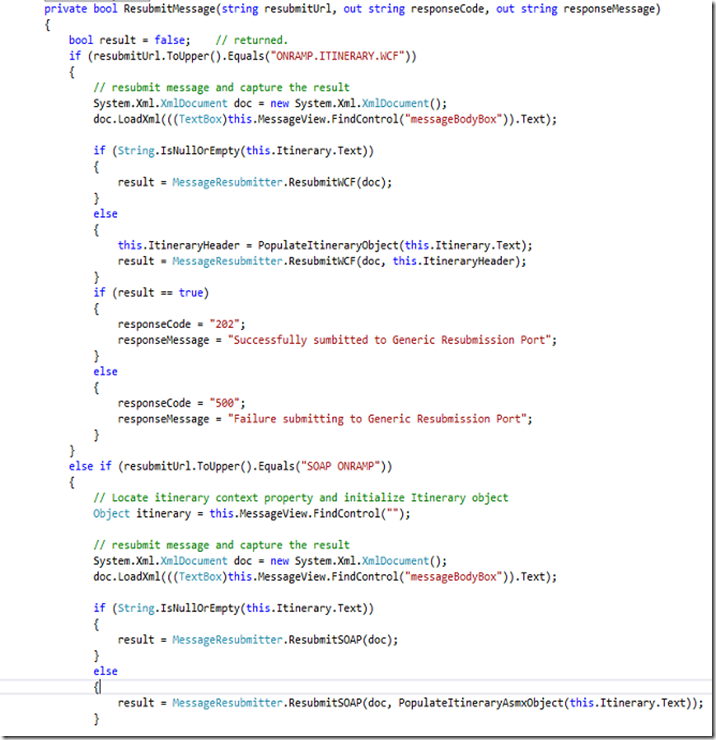 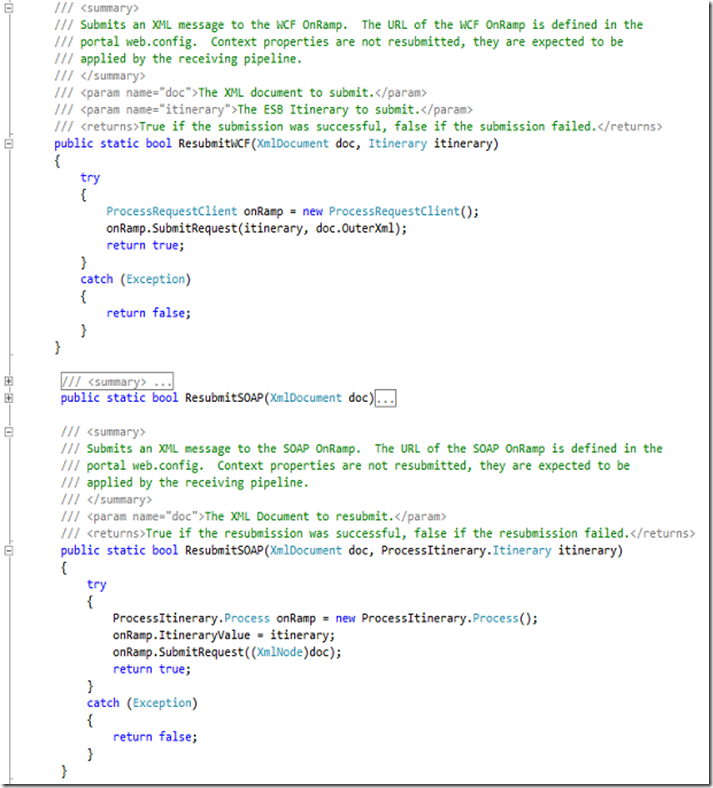 What is great is to understand that this will automatically start processing the itinerary from the point at which it failed.  Looking at an example Itinerary XML attached to a failed instance, you can see that the next step in the itinerary is already set, since the Itinerary engine manages this as it processes. The <ServiceInstance> tag identifies the next itinerary step to be executed, and you can see the state of both the step and the overall Itinerary are both “Pending”.

Once submitted, the remaining steps of the itinerary are executed, while any steps that executed successfully the previous time are not re-executed. 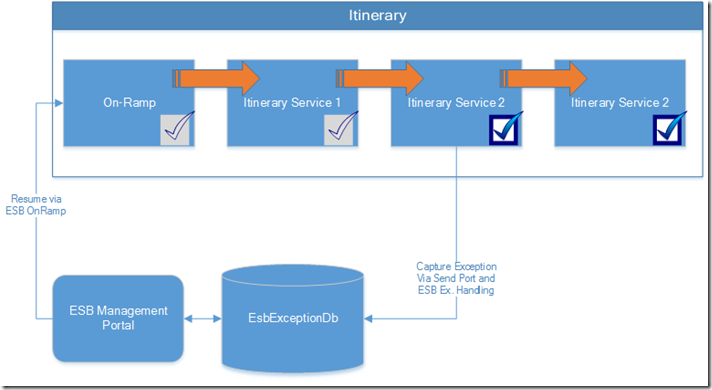 Such a simple change, but adds compelling exception handling capabilities.  The solution described above is a Manual Intervention scenario.  If you needed an automated mechanism for resubmission, simply adding a component, such as an orchestration, which processes exception messages before they reach the ALL.Exceptions Send Port, would allow you to configure automated resume with whatever retries, delays you needed.

Error: Party ‘PartyName’ enlisted under role ‘Provider(Codit.MyRoleLinkType)’ has not bound all the operations of role link port types.

Small post on troubleshooting the error “Party ‘PartyName’ enlisted under role ‘Provider(Codit.MyRoleLinkType)’ has not bound all the operations of role link port types”. It seems you need to remove the assembly and thus also the binding to get rid of this error.

I’ve used other blogs in the past and was never real good at blogging consistently.  I’m now on a mission to get some posts up here on a consistent basis.

Coming soon will be a little series of ESB Toolkit How To’s, consisting of concepts and solutions I’ve used on real BizTalk Server projects for customers.  Please let me know if you have any particular requests and I’ll get them queued up.

I had developed a simple Rule Policy in the Business Rule Composer, and was attempting to include it in an Orchestration using the Call Rules shape. The Policy was correctly Published and Deployed, and was available in the ‘Select the business policy’ drop-down, however, I was unable to specify any parameters to pass to the […]

Problem while adding custom database to the BizTalk Backup Job

BizTalk provides out-of-the-box functionality to include your custom BizTalk database in the standard backup procedure. Lately, I’ve encountered an issue with this setup.

The Evolution of BizTalk Server

The post The Evolution of BizTalk Server appeared first on BizTalk360 Blog.

This is amazing, now we don’t need to de-batch the incoming messages to insert into database tables. The single multi-record message send to the send port can be inserted into database using “CompositeOperation” in WCF-SQL adapter soap action header tab. This is know as Single file method. Create schema with the below structure. Transaction […]

BizTalk 2013: Breeze is ready to help you

With the launch of BizTalk 2013 coming to a city near you from next month, Breeze is across all the new features and has the expertise to get it done right – the first time.
(Watch this space – we will be announcing the launch ‘party’ shortly)

This is the 8th release of BizTalk and Breeze has been there as a TAP partner, early
adopter etc. for ALL 8 releases (even before BizTalk…but that scares even me). We’ve
provided feedback and suggestions on the current release and Breeze has the ability
to contact the Product team and raise an issue should the need arise.

BizTalk 2013 is also targeted for the cloud and will be offered as Platform as a Service(PaaS)
and Infrastructure as a Service(IaaS), so keep an eye out in the Azure image galleries
for this.

I’m pleased to announce that our current set of products have been updated and tested
to work with BizTalk 2013 environments, such as:
– Breeze Monitor – centralised monitoring based dashboard that gives you comfort
at night knowing your solutions are being looked after.
– Breeze Integration Framework – integration should be easy, this does
exactly that. We have put many new capabilities and items here for the BizTalk 2013
version.

For the on-premises BizTalk Server 2013 release, the following themes are important:

There is also a change in the licensing approach, where BizTalk is now moving to
a per-core licensing model.  If you need more information on this, drop us
a line.