Exciting news for all the BizTalk Community! Once again you will be able to interact with BizTalk Product Team, this time in Oporto BizTalk Innovation Day. Akshat Sharma from BizTalk Product Team will make the event keynote and will be also in the Q&A panel! 10:00 KEYNOTE: BIZTALK SERVER 2013 AND FUTURE VISION Many of […]

We are going to repeat the same statement "New release every 4-5 months once". Our last release (v5.0) was back in 10th October (Release history). Once the product gets matured and start addressing the pain points then the users (customers, prospects, community members) drive the growth of the product. Whenever we give a presentation/demo we […]

Under the hood of the "Cumulative concatenate" functoid

What’s under the hood of the cumulative concatenate functoid in the BizTalk mapper. Analytics of current code, compared with an xslt file, optimalisations and profiling. 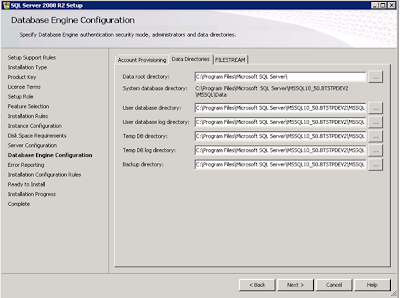 During the installation of a SQL instance, you’ll have the ability to define some folders
These locations can be defined:

%ufeff
Within SQL Server Management Studio you have the ability to change the default location for your Data and Log files for all new databases. Just %ufeff right click on the server name and select properties, navigate to the Database Settings page. Here you can find a section Database default locations for changing the data and log directories. 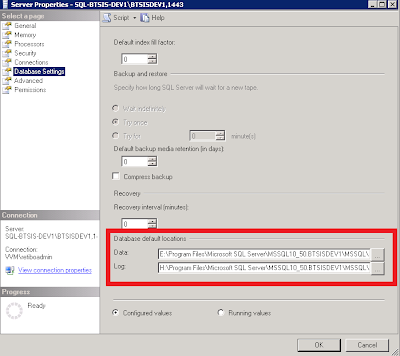 But if you search through all of the pages under Database Settings you will not find anything that shows the default backup directory.  To find this we need to look in the registry.

Or something similar for your instance of SQL server. The registry key BackupDirectory is the one you’ll need to change to set another default Backup Directory. 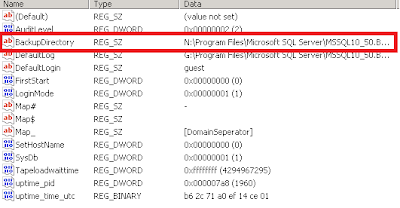 %ufeff
Changing the registry can also be done with a T-SQL query command. To do so, you’ll be using the extended stored procedures XP_REGREAD and XP_REGWRITE.

Reading the falue in registry can be done by using this command:

This will result in something similar as this:

Authentication on an SFTP location can be done with simple username/password credentials However another way to authenticate the sender is by using a Key Authentication file. But how can this last authentication method be used inside the BizTalk SFTP adapter?

Now then let’s set up the port in BizTalk. In my example I ’ve configured a receive location, but obviously the same goes for the send port configuration.

First of all choose the created adapter in the biztalk admin console, as shown below.

To set up the proper configuration for the SFTP port, just press the ’Configure’-button.

These parameters need to be set:

Seems pretty straight forward, doesn’t it?
Well there are some things you ’ll need to take into account to make sure the connection can be made

Make sure the identyfile type is supported

You’ll need to make sure the identyfile type is supported by the library. The supported versions can be found here. As this is the library which is used by the bizTalk SFTP adapter.

Make sure the identyfile can be recognized

In my case for example, I got an *.ppk file as authentication file. But as it turned out, this wasn’t recognized.
The error message you git is this:

Also make sure you only use the intended parameter SSH Identyfile Passphrase, and leave the SSH password blank.
In case both password fields are filled, the SFTP adapter will try to authenticate by the username/password credentials stated. So it won’t offer the specified identyfile to authenticate.

I orignally posted this on my companies blog: http://blog.cnext.eu/2013/02/19/using-key-file-authentication-with-the-biztalk-sftp-adapter/

Porting the WCF Test Step from BizUnit 2.0 to BizUnit 4.0 leveraging some of the best features of the framework

Whipping up a BizUnit test step using the BizUnit 4.0 libraries is a piece of cake, but chances are that any test step you write is going to be used multiple times throughout the life of a project and in ways you can’t predict and you will want to spend the extra effort when developing […]

Overview The following is a “brain-dump” of my experiences configuring ESB Toolkit 2.2 on a Windows Azure VM using the BizTalk Server 2013 beta (February 15th 2013 revision) on Windows Server 2012. What’s New There have been some enhancements made to the ESB Configuration Tool. Default Configuration The ability to apply a default configuration, similar […]

March 14th I’ll be in Oporto during the Oporto BizTalk Innovation Day in Portugal. The event is organized by Sandro Pereira and Devscope. Sandro and I will be joined on stage by Microsoft Integration MVP’s Tord Nordahl, Saravana Kumar and Nino Crudele. We as a team (BizTalkCrew) will provide all the presentations of the day and will be answering questions at the end of the event during a Q&A