Governance and Auditing Capabilities I leave it to the end, which in my opinion is perhaps one of the main and important functionality of this tool and that no other on the market enables: the ability to bring auditing functionalities to BizTalk Server platform. The same way as it is imperative for organizations to be […]

2012 was a fun year. I added 50+ blog posts, built Pluralsight courses about Force.com and Amazon Web Services, kept writing regularly for InfoQ.com, and got 2/3 of the way done my graduate degree in Engineering. It was a blast visiting Australia to talk about integration technologies, going to Microsoft Convergence to talk about CRM […]

As a pure Microsoft fan, I pretty much buy anything that gets shipped by Microsoft whether I use it or not. XBOX is one such device which was just sitting and collecting dust in my TV cabinet for a while now. During this holiday season I decided to clean up the TV cabinet, get rid […]

Productivity Tools Integrated Knowledge Base Repository Once the problems, failures or incident are solved, usually two things may happen: The administration team documents the problem in an internal repository (Wiki, SharePoint) of the organization, or in a worst case scenario in their personal notebooks; The Administration team after the incident has been solved don’t make […]

My momma always said, “Life was like a box of chocolates. You never know what you’re gonna get.” (Forrest Gump). I am sitting here reviewing what i have done during 2012 and trying to envisage what the 2013 will bring andI started to dream about Azure Service Bus (ASB). I had been reading the “Magic […]

Complexity abstraction of certain tasks Due to several reasons, either for not having enough work to keep resources busy, thereby justifying not having a dedicated team or simply for financial reasons, few companies have a dedicated BizTalk administration team. This way organizations tend to group these administration tasks in a team with extended functionalities to […]

So it’s been a long year and a lot of things have happened, I wanted to highlight all this in my recap of 2012! The first BizTalk Admin book was canceled in an agreement with us authors and PackT, me and Steef-JanWiggers are working on a new one, so stay tuned it will come out […]
Blog Post by: Tord Glad Nordahl

While closing out some tasks before the Christmas holidays I ran into this “head scratcher” during the Enable Exception Management Database step of the ESB Toolkit configuration. Error Exception calling “Create” with “0″ argument(s): “Create failed for Login ‘XXXX\BizTalk Server Administrators Prod’. “ Fix The server I was configuring the ESB Toolkit 2.1 on was […]

Monitoring and Alert Notification capabilities BizTalk360 allows us to monitor all kinds of resources associated with the different BizTalk Server infrastructure layers in which we can highlight: Services and Applications Allows us to monitoring HTTP address or external Web services codes for known errors (e.g. 200, 202, etc.). We can monitor the expected state (Started, […] 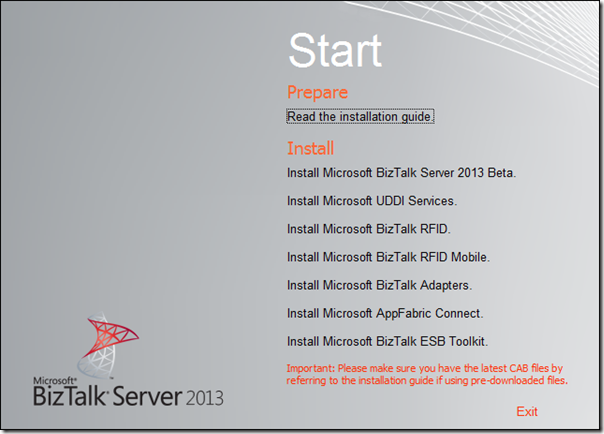 In case you download BizTalk2013Beta.exe from the Download Center you will have a folder named for instance BizTalk2013beta (depending how you named the folder when unpacking the media). When you run the setup in that folder you can install BizTalk, UDDI Services, RFID, BizTalk Adapters and ESB Toolkit.

For BizTalk Server 2013 Beta itself there is documentation available for installation (divers Operating Systems), and the product itself. 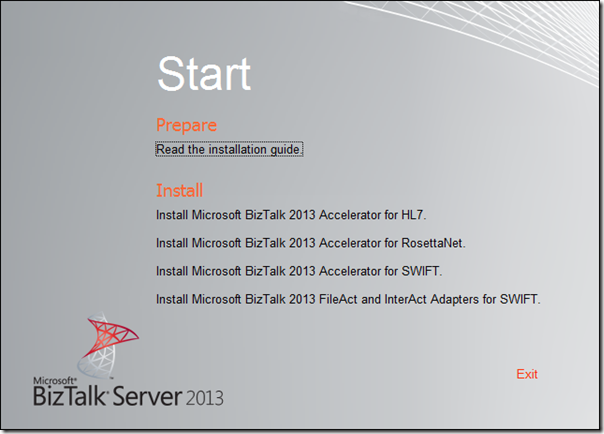 Within this folder you will also find the installation guide for the accelerators.

In case you download HIS2013BETA.exe from the Download Center you will have a folder for instance called HIS2013Beta (depending how you named the folder when unpacking the media). 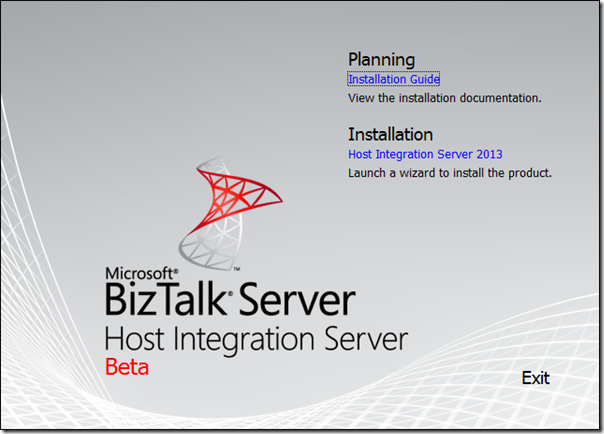 BizTalk Server 2013 beta is in my view an improvement from an installation and configuration perspective. There a now loose ends as in separate downloads for additional features like adapter pack or ESB Toolkit. Everything is on the media and for the accelerators or HIS there is a separate download, available through same location on the Download Center.