This is the second post in which I in detail describe how to install and configure an EPiServer project.
Configure providers and permissions in web.config

Since we’ll be  using SQL Server…

These two posts are the base for an introductory EPiServer lab evening I’ll be hosting at Sogeti (or have hosted depending on when you’re reading this). Instead of a…

I am deeply engrossed at present in a new book, published at the beginning of this year, called ‘Intelligent Systems – Principles, Paradigms and Pragmatics’ by Robert Schalkoff, and published by Jones & Bartlett. Rather strangely, I note the copyright year is 2011, so I guess it fell through some kind of wormhole from the future. I don’t think I have enjoyed reading an IT book as much in the last 20 years.
The book is a modern introduction to the whole field of ‘intelligent systems’ (IS) which is broadly what we used to call AI before the term fell out of favour. It is very much an introduction “suitable for a first course in IS…anywhere from the junior level undergraduate to first year graduate level”. It is 700+ pages of excellence.I’m glad to say that I’m fairly familiar with the ground covered in the first few chapters, despite the absence of a degree in Computer Science. What I really like about it, though, is that it covers a wide range of subjects, is grounded in practical use of freely available tools (Protege, CLIPS, Soar, etc.,) and is written by someone who clearly understands what it is like to be unfamiliar with the subject and the kind of questions that beginners ask. It doesn’t drown you with algebra, but uses enough to illustrate the points being made. It concentrates almost more on worked examples of CSPs, rule sets, blackboards, decision trees, fuzzy logic and all kinds of other stuff than it does on maths. An hey, Microsoft’s BRE even gets a mention in dispatches on page 171 🙂 I’m happy! I have some way to travel yet before I get to the chapters on neural networks, learning systems, genetic algorithms and the like, but I will enjoy the road.
I strongly recommend this book for anyone who is looking for a comprehensive and highly readable introductory overview of IS.

I’ve added the first two of a series of webcasts looking at creating custom activities in WF 4.0. The first one looks at deriving from the CodeActivity class to create simple activities, and the second looks at deriving from the AsyncCodeActivity (and being more friendly to the workflow runtime).
WF 4.0 Custom Activities Part 1 Code Activity
WF 4 Custom Activities Part 2 Asynchronous Code Activity

As promised, you can download the slides and demos from my presentations today here.  Enjoy.

Pluralsight was happy to sponsor the event this year – look for us at the next Code Camp!

So there I am doing what a geek does best – sitting in Cafe Nero on Tottenham Court Road in the centre of London on a Saturday afternoon, killing timewhile waiting to meet up with my daughter, and doing a little coding to pass the time when someone (his name turned out to be Jim) asks me “so what do you think of the Visual Studio 2010 beta?”

Me> It’s OK; its stable and functional, and the UI performs quite well, which is good because it uses WPF.

Me> (slightly confused, and thinking he means he is working with WPF) Oh, that’s interesting. So what kind of code do you write?

Me> Yes, I realise, but what are you using WPF for?

Jim> No, I mean I work for Microsoft. I’m in the Visual Studio team over in Redmond. I work on Visual Studio. Always good to get feedback!

Beats an MSDN survey any day of the week!

The HIPAA 5010 Support KB Article 973415 explains the new ability within BizTalk to support the next version of HIPAA standards for EDI data interchange.

Note: as noted in the Applies To section at the bottom of the article, this only works with BizTalk 2009, sorry BizTalk 2006 R2 users, looks like you will be migrating to 2009 sooner than you thought.

Better reliability, performance, and scale for the following key features

Integrated tracing to help in debugging EDI specific issues. This improvement is aimed at reducing the time taken for diagnosing and isolating an EDI problem. 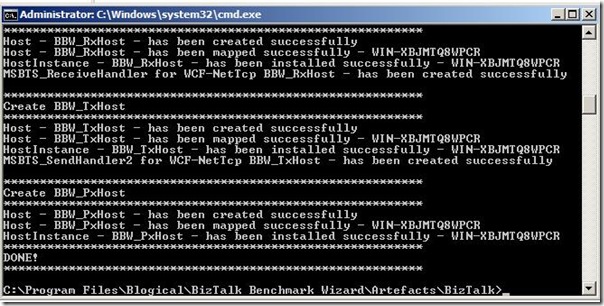 My colleague Gijs (BizTalk MVP) pointed me towards benchmark tool for BizTalk. This wizard checks the performance of your BizTalk Server installation using pre-existing scenarios and validates it against some known results. I thought I will give it a spin on my VPC (sandbox BizTalk 2009 environment with SQL Server 2008 Enterprise and Windows 2008 Enterprise). Installation process is describe on this blogpost. Run script:

If follow up the rest of process and you have your Benchmark tool set to go. Start Wizard, give correct database name, let check prerequisites and select a scenario: 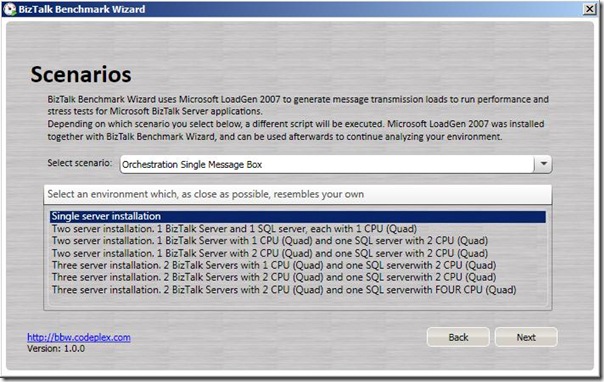 In this case a Single Server Installation with orchestration with singel messagebox. 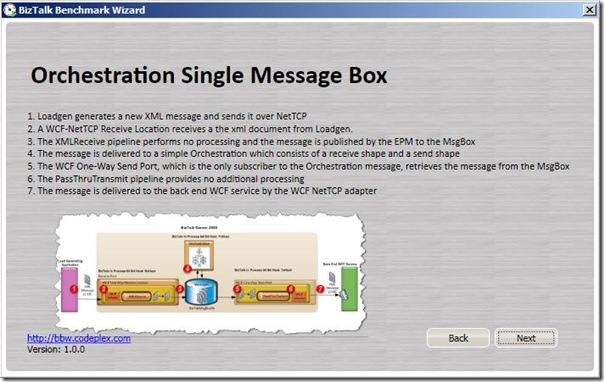 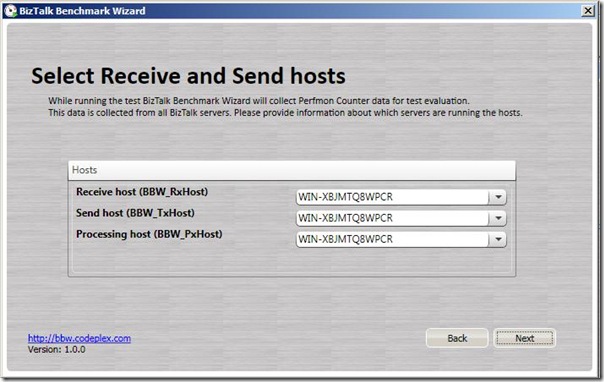 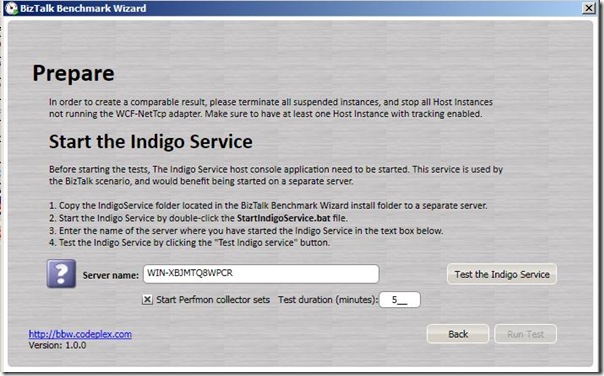 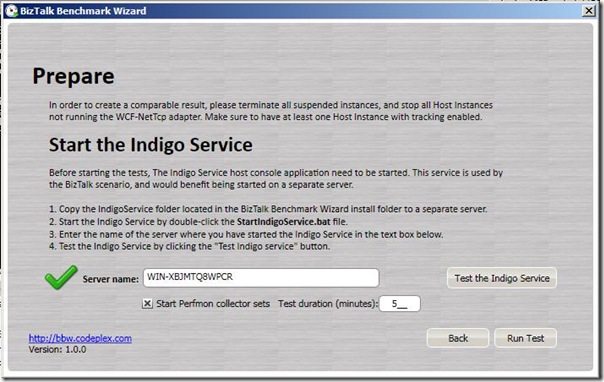 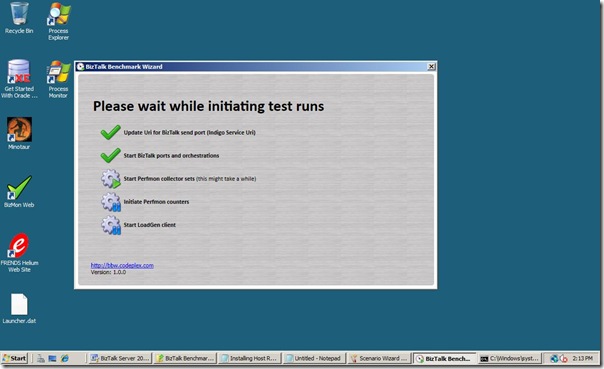 and then finally the results as test is running: 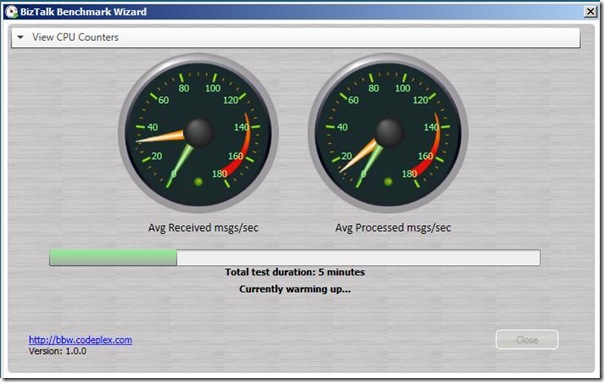 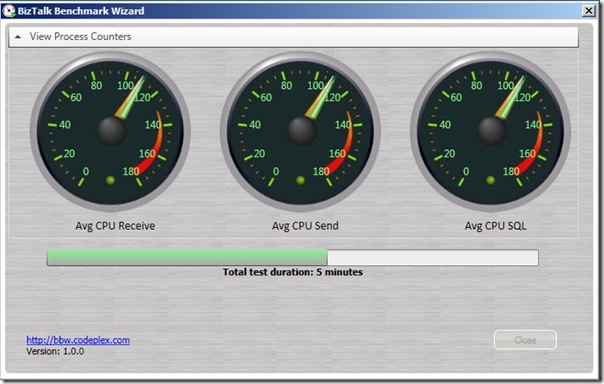 This test runned inside my VPC, with 1024 Mb memory and 1 CPU (Centrino Vpro Dual Core). Test did succeed completly: 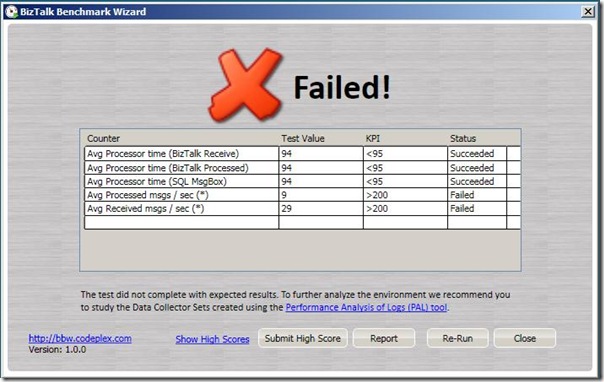 I finished with report that creates PDF for you. I must say I am very pleased with this tool, easy to install and to setup tests via a scenario. Of course this is just a single machine and representative for a real scenario (i.e. High availability). I will use it again soon when I am going to set a high available environment (clustered SQL 2008, two BizTalk instances).