Despite its flaws and bugs, Visual Source Safe continues to be the most popular source control program in the Microsoft realm. Many poeple I talk to are not aware some of its more useful functions such as “Pinning”. Understanding the use of pinning can be very useful in a multi-developer environment……(read more)

When declaring complex types in XML schema definition, I have grown accustomed to suffix the type name with “_Type”. This allows me to easily distinguish a complex type from a global type when viewing the definition in a graphical design tool such as XML Spy. However, it has unintended consequences when incorporating such schema into a web service.

When using Microsoft’s Web Service proxy class generator (wsdl.exe) , the generator uses the type name for the names of the classes it generates. Which means you’ll end up with something like this:

Not as readable as this:

Also, avoid using the “any” type, as it produces a blank class. If you cannot avoid it, you must hand tweak the generated class to use a string type instead. 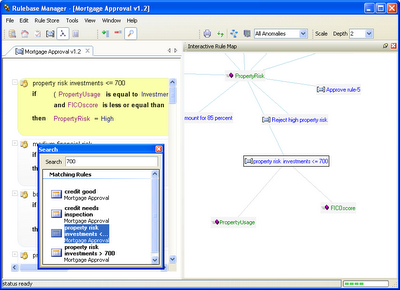 Acumen Business has just released the beta version of the new Policy Verificator that supports BizTalk 2006.

Major enhancements are made in the Interactive Rule Map (rule spider). There is a new free text search. And of course all the previous functions of Printing BizTalk Rules and Merging Vocabularies are available. 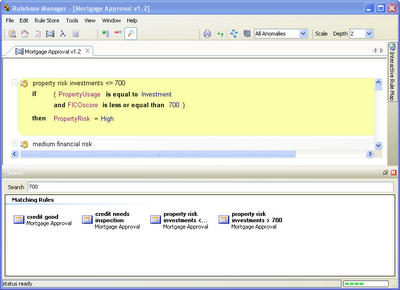 A few months ago I
wrote about an issue with writing fully streaming custom decoding components for
BizTalk pipelines, which originated in limitations imposed by the disassembler components
(the XmlDisassembler component in particular) on the streams it received from the
decoding stage.

While doing some further work on custom decoding component I ran into what seems another
reason why you’ll need to do in memory buffering in some scenarios:

I think that for most purposes, all the components care about is that the position
of the stream can be queried; however, because of the mixed COM/.NET nature of the
BizTalk Messaging engine and some of the existing components, custom streams need
to be “partially” seekable. This is not so much because they are going to actually
try to move the position of the stream, but because they use the Seek() method of
the stream to discover the current position of it (instead of using the Position property)
as described here.

Something that hints at this is that if you just return 0 from your Length implementation,
the disassembler tries to read 0 bytes from your stream (though I haven’t verified
this 100%, it might be something to watch out for).Anyway, just wanted to mention
that it appears it is important that your custom streams returned from your decoding
components are able to accurately return the stream length as it appears to the disassembler.
This can be hard in some scenarios without fully buffering the message in cases where
the length of the decoded data is different from the encoded data, because the component
cannot predict the resulting length before actually processing the entire stream.

Acumen Business released the Policy Verificator version 1.1. An all new UI is designed what should significantly increase the usability issues from the initial release. Specially of interest is the inclusion of Datetime support for rule verification as well as support for the standard Microsoft Biztalk functions and predicates.

I started of with log4j in my Java days, and was quick with adopting another fine .NET port: log4net.

But for work, we had to consider Microsofts Enterprise Instrumentation Framework (EIF). But a little more reading revealed that this package is getting replaced with the newly designed Enterprise Library. This framework not only contains Logging, but also a design pattern for Configuration, Data Access, Exception handling, Security, etc.

The Enterprise Library is all looking pretty o.k. but it seemed to be overly designed, over complicated and getting pretty slow. Also on migrating from one Microsoft packages to another: there is no migration path. And no support is mentioned for the future. Seems like this is going for a Corba-death: Beautifully designed, complicated to use, and slow.
For a comparison overview see Daniel Cazzulino’s EIF vs log4net feature comparison char

I always like fast and simple. So that takes me back to log4net. The only concern I have with log4net is that the latest view builds on Sourceforge all refer to beta releases that seems to be quite dated. But till so far I never had any issues with this latest beta release.

Scott Colestock also has been writing how log4net can be integrated with Biztalk 2004. So what else are we waiting for. Let me put in my 2 cents for some documentation on the conversionPattern:

You are free to insert any literal text within the conversion pattern.

would yield the output

By default the relevant information is output as is. However, with the aid of format modifiers it is possible to change the minimum field width, the maximum field width and justification.

The optional format modifier is placed between the percent sign and the conversion character.

The first optional format modifier is the left justification flag which is just the minus (-) character. Then comes the optional minimum field width modifier. This is a decimal constant that represents the minimum number of characters to output. If the data item requires fewer characters, it is padded on either the left or the right until the minimum width is reached. The default is to pad on the left (right justify) but you can specify right padding with the left justification flag. The padding character is space. If the data item is larger than the minimum field width, the field is expanded to accommodate the data. The value is never truncated.

Below are various format modifier examples for the category conversion specifier.

Below are some examples of conversion patterns.

The book (by Scott Woodgate, Stephen Mohr, Brian Loesgen ISBN 0-672-32598-5) seems to be getting into it’s final stage. There was a page advertisement in the MSDN magazine of November 2004 (Vol 19 NO 11 Page 108) offering a 30% discount for ordering the book from SamsPublishing.com (plus free shipping).

On Sams website I could not find any link or discount coupon. I opened an issue with Customer Service and they are contacting the Sams Marketing to inquire how we can get the 30% discount.

I received an email from the Sams Marketing with the following information: In order to get the 30% discount you have to use the coupon code BIZTALK (note it must be all caps!). You enter the coupon code on the ‘Payment Method’ page in the order process. A review of the discount will be shown on the ‘Place Order’ page. The offer is valid till the Dec 15.

In a couple of days Sams website will provide a direct link.

The BizTalk Vocabulary Upgrader has gone into beta.

The Vocabulary Upgrader enables to replace multiple references to different versions of a vocabulary to a single vocabulary version.

Have a look at the documentation, screenshots, getting started guide.

The tool is submitted to the Microsoft BizTalk Developers competition.

The Vocabulary Upgrader is also available at Acumen Business. Also available on this site is the automatic Business Rule Verification;

Log4net development is showing signs of life! After a long period of silence the 1.2.9 Beta has been released. Some highlights of the list of new features: