Today I registered for TechEd Europe 2012. Last time was in cold autumn Berlin. This time it will be warm summer Amsterdam. Time to stock up on motivation, knowledge, contacts and also some “Bitter Cookies” and Heineken.

Last time I blogged my proverbial a$$ off and I can guarantee I will do the same this time.

BizTalk Server: Basics principles of Maps – What are maps and where BizTalk can use them? (Part 2)

BizTalk maps are graphical representations of XSLT (Extensible Stylesheet Language Transformation) documents that allow us to perform, in a simple and visual manner, transformations between XML messages. We can enumerate the following standards used in the BizTalk Mapper: XML (Extensible Markup Language) – designed to transport and store data of messages; XML Schema (XSD – […]

Sometimes you just don’t have a choice but to hardcode the credentials for a SQL connection string in a config file. I’m not cowboy enough to accept that storing a username and password in plain text in a web.config file is a good practice, so I started trawling around the web for an alternative. My […]

Introduction Maps or transformations are one of the most common components in the integration processes. They act as essential translators in the decoupling between the different systems to connect. In this article, as we explore the BizTalk Mapper Designer, we will explain its main concepts, covering slightly themes such as product architecture, BizTalk Schemas and […]

Off course you make backups of your BizTalk databases! You have set the Recovery Model from the databases to Full and every single day your Maintenance Plans or (actually) the SQL Server Agent jobs make Full and Log backups. So in case you need to restore your BizTalk databases, you are safe…
Well, I’ve got some news for you… You’re not so safe…

If you make BizTalk Backups like described above, you could be in deep trouble in case you need to restore. When it comes to making backups from your BizTalk databases, Microsoft supports only one way….

I generally try to write a blog each month about something I have been doing around BizTalk but lately I have been doing more and more work outside of the BizTalk world and I have not written anything. I have shifted to a new role in the company I work for, where I now give […]

Microsoft and the open source community

For the last decade, I have repeatedly, in my imitable
Microsoft fan boy style, offered an alternative view to commonly held beliefs
about Microsoft’s stance on open source licensing. In earlier times, leading figures in
Microsoft were very vocal in resisting the idea that commercial licensing is
outmoded or morally reprehensible. Many
people interpreted this as all-out corporate opposition to open source
licensing. I never read it that way. It
is true that I’ve met individual employees of Microsoft who are antagonistic
towards FOSS (free and open source software), but I’ve met more who are
supportive or at least neutral on the subject.
In any case, individual attitudes of employees don’t necessarily reflect
a corporate stance. The strongest
opposition I’ve encountered has actually come from outside the company. It’s not a charitable thought, but I
sometimes wonder if there are people in the .NET community who are opposed to
FOSS simply because they believe, erroneously, that Microsoft is opposed.

Here, for what it is worth, are the points I’ve repeated
endlessly over the years and which have often been received with quizzical scepticism.

a) A decade ago,
Microsoft’s big problem was not FOSS per se, or even with copyleft. The thing which really kept them awake at
night was the fear that one day, someone might find, deep in the heart of the
Windows code base, some code that should not be there and which was published
under GPL. The likelihood of this ever
happening has long since faded away, but there was a time when MS was running
scared. I suspect this is why they held
out for a while from making Windows source code open to inspection. Nowadays, as an MVP, I am positively
encouraged to ask to see Windows source.

b) Microsoft has
never opposed the open source community.
They have had problems with specific people and organisations in the
FOSS community. Back in the 1990s, Richard
Stallman gave time and energy to a successful campaign to launch antitrust
proceedings against Microsoft. In more
recent times, the negative attitude of certain people to Microsoft’s submission
of two FOSS licences to the OSI (both of which have long since been accepted),
and the mad scramble to try to find any argument, however tenuous, to block their
submission was not, let us say, edifying.

c) Microsoft has never, to my knowledge, written off the
FOSS model. They certainly don’t agree
that more traditional forms of licensing are inappropriate or immoral, and
they’ve always been prepared to say so.

One reason why it was so hard to convince people that
Microsoft is not rabidly antagonistic towards FOSS licensing is that so many
people think they have no involvement in open source. A decade ago, there was virtually no evidence
of any such involvement. However, that
was a long time ago. Quietly over the
years, Microsoft has got on with the job of working out how to make use of FOSS
licensing and how to support the FOSS community. For example, as well as making increasingly
extensive use of Github, they run an important FOSS forge (CodePlex) on which
they, themselves, host many hundreds of distinct projects. The total count may even be in the thousands
now. I suspect there is a limit of about
500 records on CodePlex searches because, for the past few years, whenever I
search for Microsoft-specific projects on CodePlex, I always get approx. 500
hits. Admittedly, a large volume of the
stuff they publish under FOSS licences amounts to code samples, but many of
those ‘samples’ have grown into useful and fully featured frameworks, libraries
and tools.

All this is leading up to the observation that yesterday’s
announcement by Scott Guthrie marks a significant milestone and should not go
unnoticed. If you missed it, let me
summarise. From the first release of
.NET, Microsoft has offered a web development framework called ASP.NET. The core libraries are included in the .NET
framework which is released free of charge, but which is not open source. However, in recent years, the number of
libraries that constitute ASP.NET have grown considerably. Today, most professional ASP.NET web
development exploits the ASP.NET MVC framework.
This, together with several other important parts of the ASP.NET
technology stack, is released on CodePlex
under the Apache 2.0 licence. Hence,
today, a huge swathe of web development on the .NET/Azure platform relies
four-square on the use of FOSS frameworks and libraries.

Yesterday, Scott Guthrie announced
the next stage of ASP.NET’s journey towards FOSS nirvana. This involves extending ASP.NET’s FOSS stack
to include Web API and the MVC Razor view engine which is rapidly becoming the
de facto ‘standard’ for building web pages in ASP.NET. However, perhaps the more important
announcement is that the ASP.NET team will now accept and review contributions
from the community. Scott points out
that this model is already in place elsewhere in Microsoft, and specifically draws
attention to development of the Windows Azure SDKs. These SDKs are central to Azure development. The .NET and Java SDKs are published under
Apache 2.0 on Github and
Microsoft is open to community contributions.
Accepting contributions is a more profound move than simply releasing
code under FOSS licensing. It means that
Microsoft is wholeheartedly moving towards a full-blooded open source approach
for future evolution of some of their central and most widely used .NET and
Azure frameworks and libraries. In
conjunction with Scott’s announcement, Microsoft has also released Git support
for CodePlex (at long last!) and, perhaps more importantly, announced
significant new investment in their own FOSS forge.

Here at SolidSoft we have several reasons to be very
interested in Scott’s announcement. I’ll draw attention to one of them. Earlier this year we wrote the initial
version of a new UK Government web application called CloudStore. CloudStore provides a way for local and
central government to discover and purchase applications and services. We wrote
the web site using ASP.NET MVC which is FOSS.
However, this point has been lost on the ladies and gentlemen of the
press and, I suspect, on some of the decision makers on the government
side. They announced a few weeks ago
that future versions of CloudStore will move to a FOSS framework, clearly
oblivious of the fact that it is already built on a FOSS framework. We are, it is fair to say, mildly irked by
the uniformed and badly out-of-date assumption that “if it is Microsoft, it
can’t be FOSS”. Old prejudices live on. 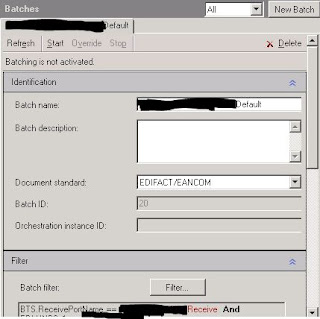 If you have been working with BizTalk and EDI Batches you would most likely have run in to problems with starting and stopping EDI Batches as this require you to go into a screen on the party to start and stop the EDI batch:

If you have a lot of EDI parties with batches on them then this is a big job to do if you need to import bindings as EDI batches must not be running when you import bindings with party information. There is an unsupported way around this.

When you press the start or the stop button you are sending a row into the PAM_CONTROL table in the BizTalk management database. And the BizTalk EDI Application have a receive location that looks for data in the table (through a stored procedure). So with a little bit of SQL magic we can stop every EDI batch that is running in the BizTalk Server:

And if we want to start the batches again we can use this SQL magic (you have to specify which parties that you want enable batches for or some other criteria in the where section):

A lot easier than going through the parties UI. I have only tested this on BizTalk 2009. I will update when I get a chance to test it on other BizTalk versions.

Check out this free video snippet from posted on YouTube thanks to Pluralsight Make sure to go to the YouTube HTML5 page to turn on HTML5 video and turn off that horrible Flash
Blog Post by: jon